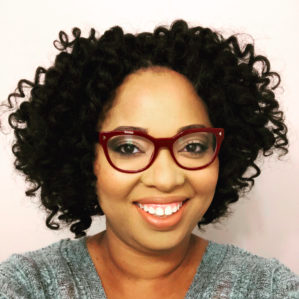 Universal Fan Con was an idea born as a collective. We as fans and geeks of the online community with our respective brands decided to launch the idea of a convention for fans from marginalized communities to have a safe space to celebrate their fandoms.  I was brought on Director of Community Outreach for the FanCon Organization. My role was to spread the word and be a public facing liaison for the organization. I lent my brand Black Girl Nerds and invested my social capital into the mix which allowed for a large network of nerds and geeks to be exposed to this new event. I also leveraged my relationships with brands, studios, and celebrities to get them onboard and co-sign on this fan convention.

Since the Kickstarter launch in 2016, which raised a significant amount of funds, I was honored and proud that so many in the community rallied support for Universal Fan Con and were just as excited as I was about the event. People were sending me tweets and messages saying they have never been to a con, but they will definitely be coming to Universal Fan Con. I spent a great deal of my time expressing to the public how much this con means to me. I traveled all across the country and participated on panels, hosted screenings, coordinated meetups and wore my geek flag proudly as Director of Community Outreach.

As I was working to spread the mission of Universal Fan Con, I did not involve myself with financial or legal matters.  To be frank — I didn’t know what was coming in nor what was going out. I didn’t sign any contracts. And in hindsight, I realize that this should have been a major priority. However, I acknowledge that in hindsight, that does not remedy the aftermath. On April 3, a bomb was dropped on me about our finances. I was shocked that outstanding bills were not paid and that the likelihood of FanCon would be no longer.

I help oversee our Affiliates team — our team of bloggers, vloggers, podcasters, etc who are the cheerleaders that have helped to spread the word of Universal Fan Con. We discussed having an emergency Go Fund Me and I even created a video as a last-ditch effort. I was reluctant and didn’t like how it would look that I was being asked to be the face of the video, but I went with it anyway. However, I guess I was positioned as the leader and representative of the fandom community, and I recorded a video about our need for funds. After we had our meeting with Affiliates, most agreed a Go Fund Me would be a good idea. I had a secondary meeting with the FanCon board and we decided rather than putting the onus on fans and asking for money which we already did during the Kickstarter, I agreed that we should try to find ways to scale down the size of the space and try to defray costs. I also worked with a sponsor at the last minute to help us out that provided a generous donation that I thought would have us in a better position.

48 hours ago, I found out that we owed more money and that there was no way to run this con with the debt that was owed. I called the team myself and requested an emergency board meeting to discuss what we need to do and what went wrong. As it turns out there was a balloon budget that would make it impossible to run this convention by Friday, April 27. I was sick to my stomach, devastated and I’m still in shock by all of this because at the time I thought FanCon was okay. I had a press coverage meeting with my team a few days before and I was prepping my schedule as to what we plan to cover at the event. I was completely blindsided by this news and frankly still don’t understand what happened.

I owed more due diligence to the community and I did not know what was happening behind the scenes in terms of contracts and financials. I made assumptions that I thought were okay and that’s not how you run a business. I put my faith into others who were subject matter experts in various areas and assumed that everything was a well-oiled machine. I put my personal name and brand of Black Girl Nerds on Universal Fan Con knowing this would be a success and would help more Black women, fans of color, and so many marginalized groups get the opportunity to have a platform where they can see themselves reflected and feel represented.

All of you trusted me, I’m certain many of you decided to purchase your ticket and/or financially support this event because of me. And I understand completely that I have let you down. I have started meetups at DragonCon, San Diego Comic Con and New York Comic Con and opened it up to the community to participate. Communities that I have built a rapport with for years and online communities I’ve helped to build were a part of this mission. In no way, shape or form would I ever want to jeopardize what I have spent years building and creating and compromising many nights of sleep over, just to cash in on a few bucks. I worked for Universal Fan Con as a volunteer. I was never paid but was promised part of the profits.

My statement, recollection of events, and acknowledgment of responsibility will, unfortunately, do nothing for those who have requested time off, put their livelihoods in jeopardy, and spent money on travel, lodging, registration and more. I am personally devastated to have broken the trust of my community. I know that only time and concrete resolutions will regain your trust and I am prepared to work toward that and to honor that truth.