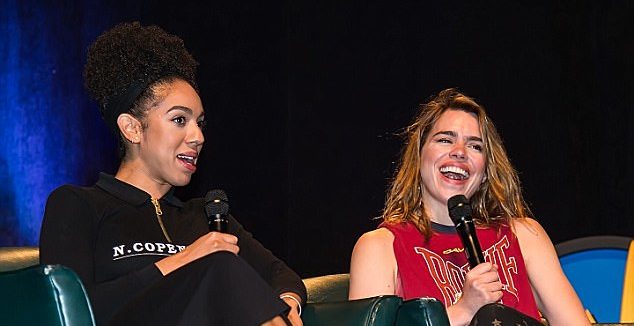 Let’s hop in our TARDIS and go all the way back to June, landing in the main hallway of the Philadelphia Convention Center during Wizard World for a quick peek at when Rose met Bill or when Pearl met Billie, whichever you prefer. Rose was the first companion of the modern run, and Bill was the companion that got me back into the franchise after taking a two-year break.

Doctor Who is headed into some brand new territory bringing in Jodie Whittaker to take up the mantle of the Doctor, the first time a woman will be playing this coveted role. (You certainly can teach old franchises new tricks it seems!)

Many are jubilant. Many are rageful. I’m cautiously optimistic because it could be the shot in the arm this aged property needs, or it might be a cynical bid to cash in on “buzzword: diversity” without any real commitment or understanding of why it’s needed. Let’s see how many women are in the writers’ room. Let’s see how many of them are of color. My caution will abate or grow depending on how that all shakes out.

There’s been other news as well; before Jodie takes her place in history, Bill will be back for the Christmas Special (yay!) and then gone once and for all (boo!). Peter Capaldi has begun his exit as the titular character. Lastly, Steven Moffat is stepping down as show runner, a fact that I’m sure Tumblr is celebrating. It’s hard to believe that in early June we knew none of this. It was a simpler time. So, what happened when Billie Piper, met Pearl Mackie?

Seeing them was not something I wanted to miss. Though, miss it I almost did! I woke up late, leaving me one hour to get myself together and get into town. Thanks to the manageable lines, I was able to do just that.

Both ladies were quite cozy with each other despite only meeting the night before. They even agreed on some key points. They both expressed being happy they weren’t Who fans before getting their gigs. There would have been too much expectation muddying their performances. Both of them benefitted from having Doctors who were huge fans of the franchise. It was like working with living Doctor Who encyclopedias. They also agreed that they would pick Matt Smith’s Eleven as the other Doctor they’d want to play opposite.

Billie and Pearl’s experiences, separated by over a decade, had some marked differences, however. When the show was being conceived and Billie was up for the part of Rose, she was warned not to do it! Everyone counseled her that it wouldn’t have the charm of the original, going so far as to predict it would be “rubbish.”  All Pearl got was a chorus of “DO IT!” from everyone around her. (A “started from the bottom” reference seems apropos here.)

Pearl also had to contend with people deciding they didn’t like her on sight. She got a fair amount of people coming up to her saying “I didn’t think I’d like Bill, but I do!” Pearl wondered aloud how people made snap decisions like this a year before they’d even seen her do an episode. Billie had no such complication.

They’re both very talented and brought a lot of heart and spirit to this beloved television show. I will miss Pearl Mackie immensely, but I hope she scoops up another job on a kickass genre show so I can keep watching her star rise.