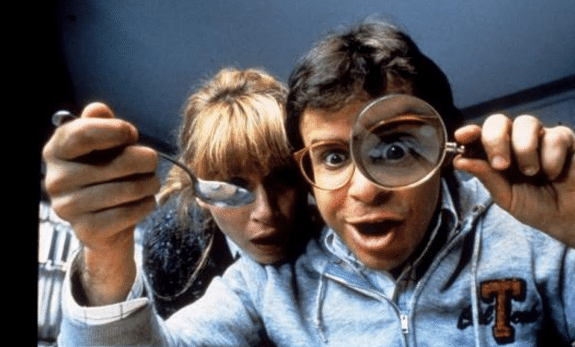 When I saw Honey, I Shrunk the Kids for the first time, it was in a movie theater in Milwaukee, Wisconsin, the summer of 1989.

Who Framed Roger Rabbit? had been one of the big hits from the year before, and Disney had been advertising a short film continuing in Roger Rabbit’s universe to screen before Honey, I Shrunk the Kids. The seven-minute romp Tummy Trouble features Roger and Baby Herman in a series of hijinks after the baby swallows a rattle. Watch the fun little film on YouTube here. From one animated short to another, Honey, I Shrunk the Kids also opened with a clever animated sequence featuring a girl and a boy who’ve been shrunk. Amazingly, these opening credits revealed no spoilers for the movie to follow, and the live action unfolded into a comedic, touching, exhilarating, and also terrifying story about what happens when unchecked science experiments go awry. 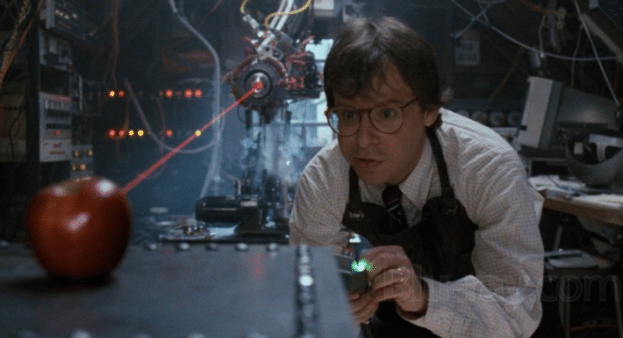 Inventor Wayne Szalinski (Rick Moranis) is convinced he’s figured out how to save the space and aeronautical industries billions through a machine that can shrink things to a mere fraction of their size — if he can get the darn thing to work, that is, instead of blowing up apple after apple. On the eve of his big presentation, his wife Diane (Marcia Strassman) has had it with another of his creations that doesn’t work and goes to her mother’s for a break. This leaves their kids Nick (Robert Oliveri) and Amy (Amy O’Neill) to hold down a very messy fort.

Their neighbors Mae (Kristine Sutherland) and Big Russ (Matt Frewer) Thompson are loading up their RV for a yearly fishing trip, one that their eldest son Little Russ (Thomas Wilson Brown) is grudgingly going on after getting in a huge fight with his dad about quitting the football team. The younger brother Ron (Jared Rushton) is all about anything he can do with his dad — baseball, football, fishing — but his dad is more concerned with bullying his eldest into submission. Big Russ sends Ron off, chastizing him for being underfoot. While knocking a baseball around his yard, Ron sends the ball flying right into Wayne’s science attic next door, triggering the machine and falling into the laser’s path, allowing the invention to finally do its job. When looking for the ball, Nick and ceaseless bully Ron are the first to get zapped and shrunk. Amy and Little Russ quickly follow.

After a humiliating presentation where Wayne gets literally laughed out of the room by his colleagues, he comes home and smashes the offending machine almost to bits, not realizing his and the neighbors’ children are a quarter of an inch tall, screaming at his feet. Worse, when cleaning up he sweeps the kids into the garbage, forcing them on the equivalent of a three-mile jungle safari across the Szalinski’s overgrown lawn. From butterflies with 40-feet wingspans, a wild bumblebee ride, the biggest Oreo that’s ever existed, ants, scorpions, and more, the four kids go on a wild and awesome ride to get back to the house and hopefully back to their own sizes. 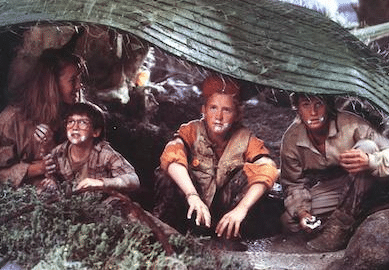 When this movie first came out, the special effects stunned everyone. It was like seeing The Wizard of Oz for the first time and having your breath taken away when Dorothy’s black and white Kansas turns into that glorious technicolor of Oz. And Honey, I Shrunk the Kids well knew it. “I don’t think we’re in Kansas anymore, Toto,” Amy says to her brother. He retorts, “I don’t think we’re in the food chain anymore, Dorothy.” At the time, we’d never seen anything like it, and certainly not so realistic either.

Using as many practical effects as possible, as well as the special effects of the day, director Joe Johnston’s vision holds up incredibly well 30 years later. They also relied heavily on camera angles and forced perspectives, which continue to be dizzying even now. In fact, thanks to all the foam and latex sculptures used as the Szalinskis’ back yard from a teeny-tiny perspective, what ends up dating Honey, I Shrunk the Kids are the clothes, hair, and clunky old PCs with their green-screen interface. And this is in high definition, too, which only makes the production even more impressive and ahead of its time. 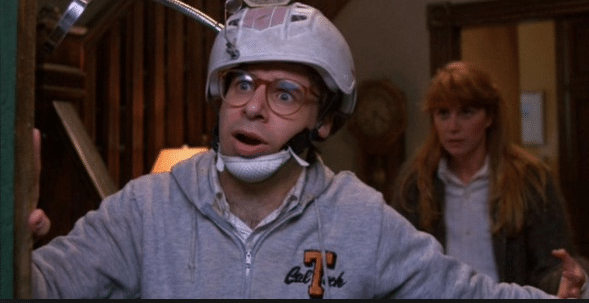 While the social and cultural significance of Honey, I Shrunk the Kids relies heavily on the creative direction and spectacular action sequences that are actually a horror movie if you think about it, there are some important themes that emerge from the story itself. “The moon is the same size, no matter how small you are,” Amy says to Little Russ, who scoffs. “The bigger the man, the bigger the moon,” is one of Big Russ’s favorite sayings. Toxic masculinity at its peak. But Big Russ eventually reveals a softer side — unfortunately after almost losing both of his boys — which is also a remarkable arc for a character in the late 1980s. Even now that arc can be rare.

Honey, I Shrunk the Kids is also a fantastic narrative about perspective and blinders, how sometimes we are not able to see what is in our own backyard, whether realistically or metaphorically. Yes, the kids are missing in the overgrown grass. But also, Amy never realized such a sensitive, cute boy who doesn’t play games was living right next door and has already liked her for years (as opposed to the popular boy who’d been giving her the runaround for weeks).

Through the shared experience of losing their kids, both the Thompson and Szalinski adults finally bond and begin to accept each others’ quirks. “What a weird family,” each of them says about the other over and over again during the movie. But by the end, they are all one big, strange family who have found a kinship and friendship beyond just being neighbors who survived a group trauma. It’s these human aspects of Honey, I Shrunk the Kids that have also aged it beautifully for its 30th birthday, along with the special effects. And unlike CPR, that’s something you won’t learn about in French class. *Wink*