The pre-title card sequence on this week’s Preacher opens on a farm in Vietnam where a couple discovers their large pot-belly pig can now float. The pig is cute and all but obviously it is possessed and needs to be destroyed. In the next scene, Herr Starr makes his entrance because apparently investigating things like this is his job. Like a flamboyantly dressed, more psychotic version of Fox Mulder. He watches as a group of neighbors, police, and random backpackers watch the pig in awe. “Shit,” he says at the credits roll.

This show has been great at introducing the main players and this episode doesn’t disappoint. We’re given insight into Starr’s character as well as a deeper understanding of the Grail, the secret organization of men in improbably white suits tasked with guarding the descendants of Jesus Christ. We were first introduced to Starr as the mysterious shoulder Dany handed the map to in season 1. 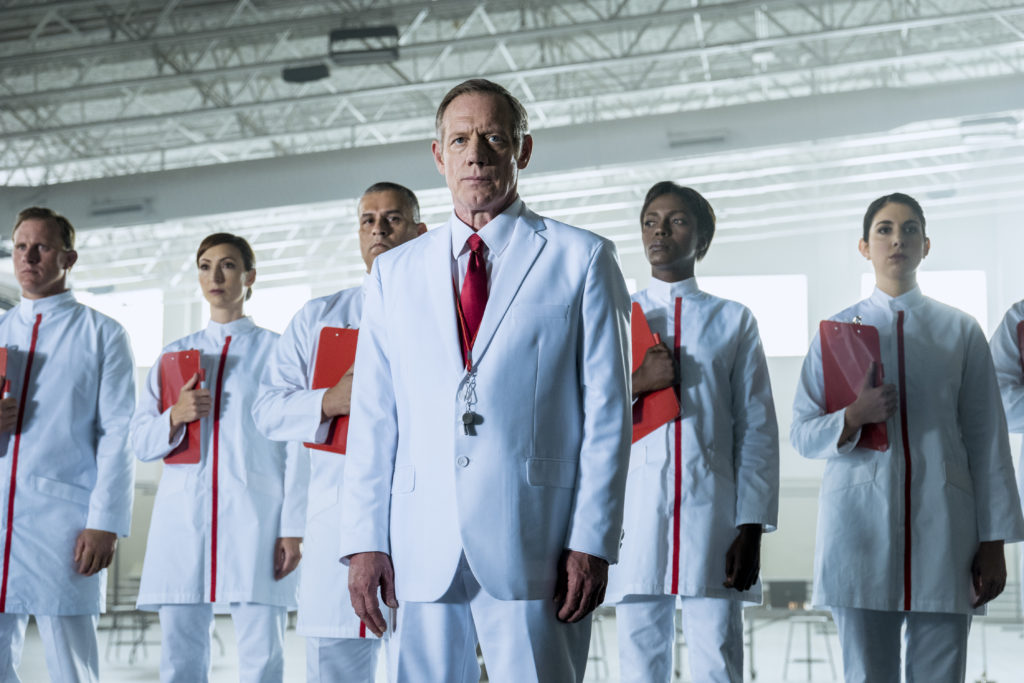 In this episode, we flashback to when he was one of several recruits vying for a spot in the Grail organization. A series of tests reveal him to be shameless, cold, efficient and ruthless in getting what he wants. He also has a strange relationship with pain and an interesting way of problem-solving. Hint: it involves murder. A lot of murder.

I would like to see what company morale is like after the new guy kills the boss and was allowed to take over. Do you really want a person like this in charge? The Grail may have power but maybe not too much common sense. All of this is important because Jesse Custer becomes Starr’s next mission. We watch him solve the floating pig problem by poisoning everyone who saw it. Now we definitely know what he is capable of and how far he will go to close a case.

In New Orleans, Cassidy takes Tulip, Jesse, and Dennis to a bar called the Hurt Locker where men shoot each other while wearing bullet proof vests. What kind of life are you living that you think this is fun? They could just bet on Cassidy, let the guys shoot him and take the money. But that’s too simple for this crew. Instead, Cassidy and Tulip pretend to be a couple with Jesse playing the judgmental Preacher. Jesse later noted that the couple ruse was a little too realistic but almost immediately drops it. They trick the men into thinking they killed Cassidy. As Preacher Jesse asks for help, they all run, leaving all the money behind. Our group stays and gets drunk with the free alcohol.

We learn two things during this late night drinking party. One: Tulip’s near death experience hit her hard. Harder than the Victor mess, their town blowing up, killing a guy in her hotel room and the highway shoot up. Two: thanks to a translator, Cassidy learns that Dennis is dying. The only way Cassidy can make up for being World’s Worst Dad is to bring Dennis to the undead side. Cassidy vehemently refuses and then turns to his true best friend for solace — alcohol. After passing out in the street, he wakes up in a morgue. In one of the most heavy handed scenes of the episode, Cassidy sadly watches a family say goodbye to the body of an older man who looks a lot like Dennis. Foreshadowing a potential change of heart? We’ll see.

Meanwhile, Tulip is having nightmares about the Saint. She deals with her lingering fear by going back to the Hurt Locker and getting the guys to shoot her over and over again.

In the most unnecessary part of the episode, at least in my opinion, Jesse continues to look for wisdom in ridiculous places. This time being a street corner preacher. Hitting up random people on the street — this is how he is dealing with the regret/existential crisis over giving part of his soul to the Saint. This is the man who will save humanity by finding God.

Starr’s story was the most interesting part of the episode. The rest feels like setup or filler. While I appreciate the imagery of Tulip’s nightmare and how it reminded me of the dream sequences from Hannibal, I couldn’t help but ask: why is this here? I asked the same about Cassidy’s hospital trip and Jesse’s street side therapy session. This episode could have benefited from being two separate episodes – Herr Starr’s backstory and then something else exploring the fallout from last week’s episode.