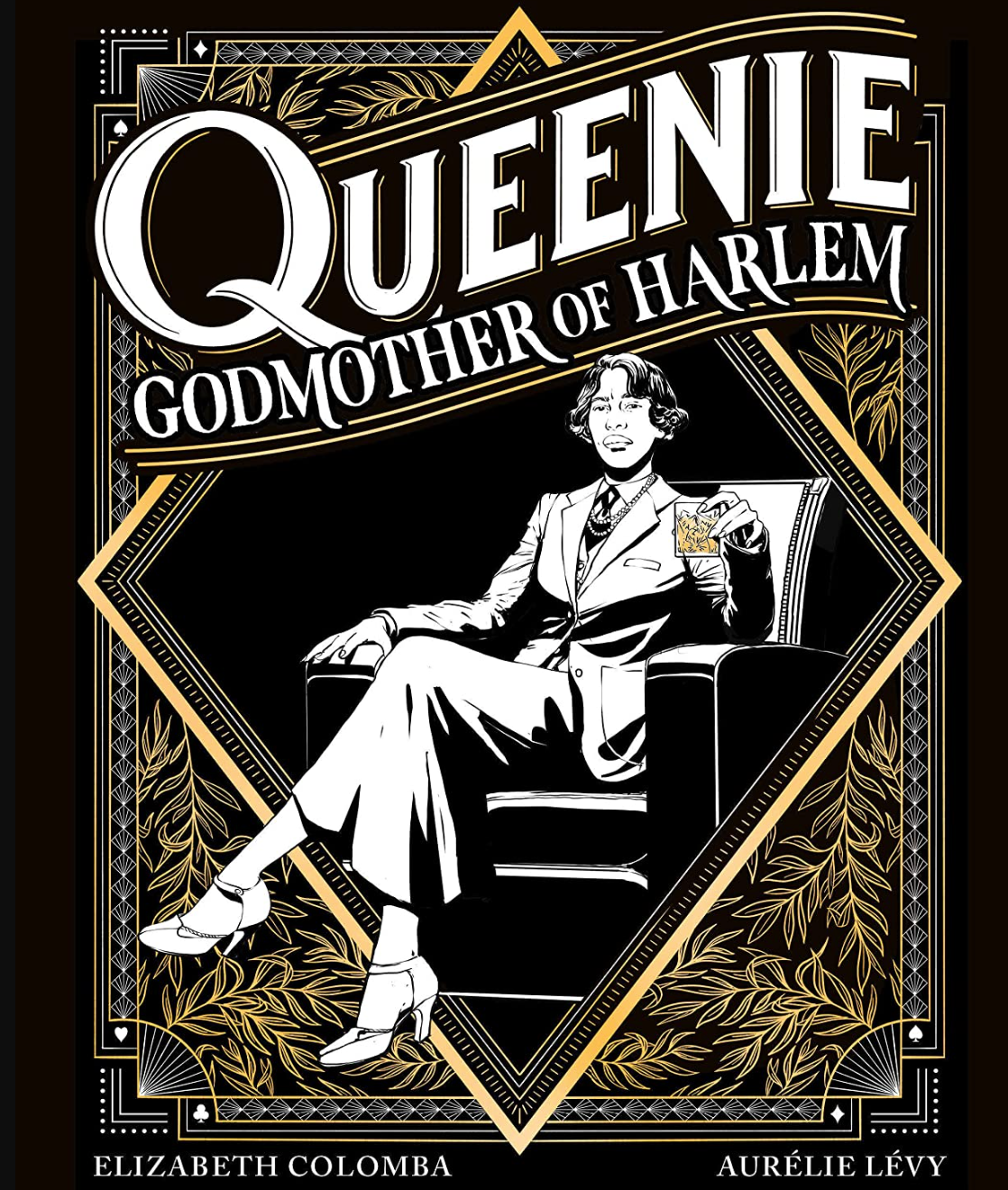 Looking for a graphic novel that shines light on an unsung heroine of Black Harlem? Queenie: Godmother of Harlem is the perfect pick and has thoughtful facts throughout.

In the intro for Hachette’s Queenie: Godmother of Harlem, the latest graphic novel from Elizabeth Colomba and Aurelie Levy, there’s a section about the megascope. The current form of megascope is featured in The Witcher and it also exists as a publishing house that focuses primarily on speculative works of science fiction, fantasy, and magical realism that feature people of color. It was named after a fictional device invented by the legendary W.E.B. Du Bois that can peer through time and space.

It’s a fantastic house that showcases the innovation and creativity of peoples of the diaspora. Legends are created from old wives tales and shape our history in new and exciting ways. Queenie: Godmother of Harlem sheds light on a different type of hero for the Black community. The intro by Columba and Levy says “Freedom has a price, freedom is priceless. History depends on whose version is told. Here is ours.”

Then begins the story of Stephanie St. Clair, a Martinique native who ran numbers in Harlem. The mafia and other organizations thought she was an easy target, but the tale of St. Clair shows she’s not so easily overtaken. Over 152 intricately illustrated pages, St. Clair’s or Queenie’s story is told in loving detail.

There’s even a glossary and list of historical figures in the book that were lost to history. Colomba is a painter living in Harlem. She’s also of Martinican descent and was born and raised in France. She has collaborated with Tom Ford and Baz Luhrmann, and her panels have a fashion forward quality to them. Levy is a French writer and filmmaker. She was born and raised in Paris and met Columba at UCLA where the two would form a creative collaboration.

The novel starts with Queenie — at times respectfully known as “Miss St. Clair” — getting out of prison in 1933. To celebrate her night out, they go to a party of Black American painter Charles Alston. There she talks about promoting the likes of Thelonius Monk and being in cahoots with Lucky Luciano.

It’s interesting to see a narrative around a renaissance figure who was considered an anti-hero of the time. During her generation, Queenie was dedicated to bettering, educating, and uplifting her community, and the support for this endeavor came from illegal activity. Interestingly enough, the practice itself is akin to crowdfunding we see today; the real infraction came in keeping others hands out of the pot.

In March 2022, The Outfit was released featuring a Chicago based madame with a similar story. Portrayed by Nikki Amuka-Bird, Madame Violet LaFontaine ran a numbers game in Chicago and was prosperous for years until white mafia came in. Underestimating the Black woman who ran the outfit, the mafia ended up having a much tougher time ousting them. They took more hits than anticipated due to her smart strategy and loyal allies.

In that narrative, LaFontaine walked so Queenie could run. After prohibition ended, the mafia was no longer making as much running illegal liquor and decided to pivot to numbers. What they weren’t prepared for was a) there already was a successful numbers game and b) the head of that game was a Black woman in Harlem. For years Queenie resisted the mafia’s interests and control and spoke out against corrupt police. She was known for placing ads in the local papers that informed the Black community of their rights. She was a precursor to Bumpy Johnson who was her enforcer originally. He was also at the forefront of most of the violence while Queenie was the brains behind the operations.

In the graphic novel we begin with her release from a prison stay and experience her life through flashbacks and meaningful interactions. As a graphic novel, the book has something minimalist about the presentation that allows the subject to be the star. Colomba’s illustrations are reminiscent of the old school Chick tracts with detailed shading and lines but with a pared-down style that works even in black and white.

The story is portrayed interestingly, but there is a bit of disjointedness with the flow. Scenes turn on a dime and suddenly end. There are flashbacks that are introduced and then dropped without forging the connection completely to the main narrative. That said, for a project that is as educational as this, it’s extremely entertaining. Queenie’s cunning, prowess, and ruthlessness in the face of her enemies is shown beautifully — and so is her humor.

There is a brutality, and its origins are portrayed beautifully through flashbacks, but in the same vein there is fierce loyalty and a determination to better her community. Sadly (or luckily depending on how you look at it), Queenie died with little fanfare. It wasn’t reported in any newspapers, and the news broke in waves over the years. On one hand, it’s nice she was able to live the rest of her life in wealth and prosperity, on the other hand it was one more Black hero that the community didn’t have access to. It’s one of the many reasons this collection is so important.

Queenie: Godmother of Harlem will come out January 17, 2023, and will be available at all major booksellers.

Crime Mob Boss Stephanie St. Clair Gets Her Own Film At HBO