I’ve seen a lot of reviews about Hidden Figures, here on BGN and other places. The movie is lauded for the great cast, the great acting, the box office. There is outrage about not knowing about the three courageous women – Katherine Johnson, Dorothy Vaughan, and Mary Jackson. Like a lot of you, I gave the book as a sort of stocking stuffer this year.  I read an article about Taraji P. Henson, where she mentions that she made an attempt at electrical engineering at my alma mater, North Carolina Agricultural and Technical State University (A&T), before transferring into the drama department at Howard University, where she graduated.

I was a junior electrical engineering major at A&T when Taraji came through and sadly she was not the only black female who was felled by the challenges of engineering. I fortunately was not. However, I was privileged to be born into a family full of STEM (science, technology, engineering, and math) role models, with two chemists and a computer scientist. My brother married a mathematician, and he and I are both engineers. We are a family of folks who love math and science, and we all remain employed in STEM careers.

Over the last couple of years and especially since the release of Hidden Figures folks have been throwing around the term STEM.  Every children’s program you see now indicates they have some kind of STEM component. Even my tween nephews get some coding classes as part of their regular curriculum in middle school. That is all well and good, but let me drop some real hidden figures, by means of the U.S. Census Bureau, on you. In 2015, the median (middle) income in the United States was ~$56,500. For the majority, median income was ~$60,100, while minorities make ~ $39,500. The Bureau of Labor Statistics indicated that in 2015 the annual mean (average) wage for STEM occupations is $87,600 which is almost twice that of non-STEM occupations. Minorities, appear to make around 85 percent of what our peers make. 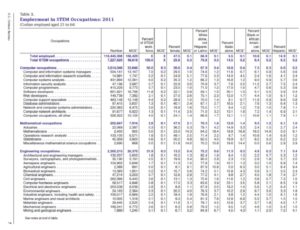 Not only do we make less be there are less of us (of course). There is a census study that indicates that minority women are about 10 percent of STEM population. A study in 2011 indicates that our representation in STEM fields is increasing, but that increase tends to not to be in engineering. So why is that?  I know. When showing of support for our children, grandchildren, nieces, nephews, godchildren, mentees, etc… by asking what they are studying in school, invariably the first thing out of most adults mouth is about how bad or terrified that we are/were of math. For many of us our enjoyment of science is best displayed in front of the television watching Nat Geo or the Science channel.  Go figure why we are not better represented. 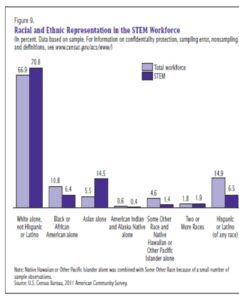 I have also been so fortunate to have worked for the first African-American to earn a doctorate Theoretical Elementary Particle Physics at the Massachusetts Institute of Technology (MIT), Dr. Shirley Ann Jackson.  In addition to her work in theoretical physics, Dr. Jackson translated her knowledge in physics to start making advances in telecommunications while working at Bell Laboratories, which included developments associated with the portable fax, touch tone telephone, solar cell, and fiber optic cables used to provide clarity in overseas telephone calls. She is also credited with supporting the creation of https://drive.google.com/file/d/0B79NN2IbqF16bF9fdDVWRjljUVk/view?ts=58a5fa4a Caller ID and Call Waiting. This is just a highlight of the work Dr. Jackson has accomplished.

I am honored to have worked for such an individual and I am surrounded on a daily basis by STEM professionals dedicated to making technology work to advance our place in the world. Part of my current responsibilities, where I work, is to provide training to support these activities, but regardless of our degree, or lack thereof, we all have a responsibility to promote those behind us to work to their fullest. You don’t have to be a math genius, there are apps for that  :-D. There are also various organization that provide homework support, my local library has a free ongoing STEM program that includes three dimensional design and printing. There are other businesses that specialize in tutoring in math.

So, while every child in the next generation may not choose to be engineers, I am hopeful that with the right support from each of us, it will not be because of an inbred fear of math and science.

Bio: E.Angel is an engineer and holds a BS in electrical engineering from North Carolina A&T State University. She’s a real nerd who loves all things Star Wars and Star Trek, and is an avid gamer. E.Angel can be contacted at e9of10@gmail.com or on either game platform as Bunnehs Sister.

PODCAST: Dr. Anthony Fauci and Living with the Vaccine in 2021