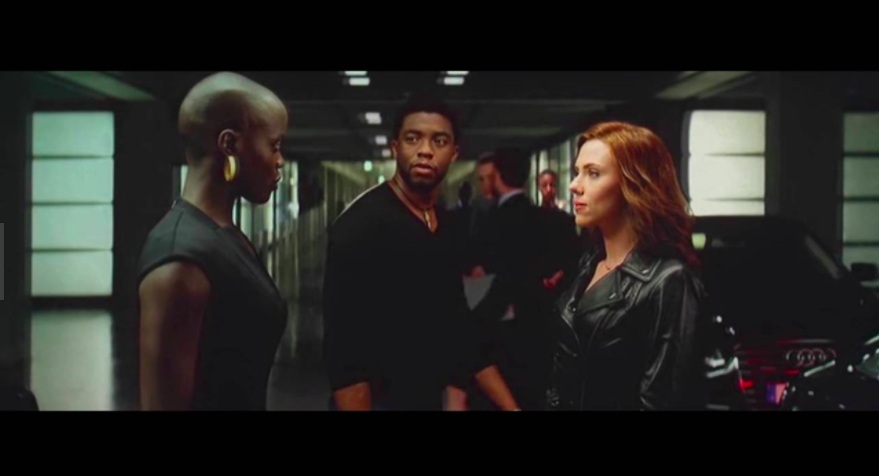 To say Black Panther has been a worldwide phenomenon would be a massive understatement. At the time of writing this piece, the film has surpassed Titanic as the third highest grossing film ever in the U.S. and the highest grossing superhero film of all time.  The Marvel/Disney flick will be the first movie to end Saudi Arabia’s 35-year cinema ban. This unapologetically black Afrofuturistic fantasy epic continues to change the entertainment, artistic and cultural landscape; a monumental achievement for descendants of the African diaspora.

Unfortunately, where there is black excellence, a backlash of antiblackness is never far behind. “Critics” have complained that the film fails on the diversity front. Others have complained that Black Panther is “too black.” Some privileged reviewers have even had the gall to claim that Black Panther fail to represent LGBTQs. Let’s not even discuss the fact that a number of theaters flat out refused to show the film citing “technical issues” and other asinine excuses. One theater, in particular, pulled a bait and switch and played 50 Shades Freed instead.

It goes without saying that neither Black Panther or any other film is above critique. In fact honest, fair analyses made in good faith are absolutely vital; not only for art to evolve but also society by extension. This isn’t to say Black Panther hasn’t resulted in a number of excellent critiques and think pieces because it has. However many of these racist reviews are written under the guise of objectivity or worse yet, social justice. When these complaints are framed in a proper context, one can easily see these objective reviews are anything but.

Since the current comic book renaissance was kicked off by Blade in 1998, fans have been campaigning for a Black Panther film for the past two decades. Since the debut of the Marvel Cinematic Universe a decade ago, Black Panther is the first film from Marvel and parent company Disney to feature its first leading nonwhite superhero on the big screen. Despite the animated Black Panther success — it outperformed all comparable Marvel animated films even without a live action film to promote it — Marvel still had no interest in bringing the Wakandan superhero to life. In fact, Marvel execs hemmed and hawed about how difficult it would be to create Wakanda.

It wasn’t until DC and parent company Time Warner announced its slate of films (several of which feature nonwhite protagonists like Aquaman, Suicide Squad, Cyborg and Black Adam) that Marvel/Disney decided to diversify its franchises. Yet for the last decade, there were hardly any complaints from mainstream (read: white) public about the lack of diversity in the Marvel Cinematic Universe. Funny how diversity wasn’t a pressing issue in regards to the Iron Man trilogy. Complaining about Black Panther being “too black” would be akin to someone complaining that Zorro is too Latinx or that Crouching Tiger, Hidden Dragon is too Asian. And speaking of Asians, there were arguably more featured in Black Panther than there were in Doctor Strange; the film that whitewashed the Ancient One.

If whites using LGBTQ representation as a smokescreen to attack Black artistry gives one a sense of a Deja Vu, there’s probably a reason for that. As a queer person of color, I’ve witnessed this time and time again. Case in point.

Point of fact Black Panther did, in fact, represent LGBTQs with T’Challa’s close ally and Dora Milaje, Ayo. In fact, she had a romantic scene which was cut from the film by Marvel Studios shot caller Kevin Feige. Just as Valkyrie had a same gender romantic scene cut from Thor: Ragnarok by Feige. So why hasn’t Feige, Marvel, and Disney been taken to task for its heteronormative erasure of queer characters? If LGBTQ representation is so important, then why hasn’t there been a demand for said representation in the new Star Wars films?

During an installment of the Buzzfeed Brews series, it was Viola Davis who made the most profound statement regarding this overt double standard towards marginalized media. She explains while strides in diversity and progress have been made in the media, its ultimately hindered by the fact that the privileged (usually cis straight white men) aren’t held to the same standards as their peers of color.

It’s the privilege pass. The more societal privilege one has– cis, heterosexual, able-bodied, white, male, etc.– the bigger the pass they receive.

A prime example would be arguably the best film of 2017.

Wonder Woman proved to be a monumental success both cinematically and financially. The record-breaking successes of an iconic queer superheroine flick was a game changer in its own right. From a diversity standpoint, Wonder Woman will no doubt change the landscape. While fans of color, women, and LGBTQs celebrated the milestone victory, the film’s success also attracted its share of detractors. Detractors with criticisms fueled by hypocrisy and hidden agendas.

Again, this isn’t to say Wonder Woman is above critique because it isn’t or that every negative opinion isn’t a fair one. Nevertheless, this film has been criticized in ways that lesser cis straight white male narratives would never be critiqued.

Many have stated that Wonder Woman fails as a film because of Gadot’s pro-Israeli comments she made regarding the Palestinian conflict.  While Gadot, an Israeli veteran, made comments that were problematic, the fact that they were only being brought up four years later after Wonder Woman broke the $700 million mark is immensely suspect. Why wasn’t Gadot’s comments brought up when Keeping Up With The Joneses, Triple Nine, or Criminal were released?

Of course, people also wrote pieces complaining that Gadot’s striking beauty and petite stature made her unsuitable for the role as the movie’s lead eponymous role. Nevermind the fact that Gadot is a skilled actress, military vet and an accomplished martial artist; many clearly didn’t get the memo that body-shaming a mother cast to play a feminist icon screams of patriarchy.

Then there were complaints of the film’s intersectionality, or lack thereof. While claiming Wonder Woman fails intersectionally may seem like a harmless blanket criticism, when framed in context, the charge is as absurd as it is hypocritical. Let’s put aside the fact that one of the flagship DC Comics character is bisexual. That in itself is unprecedented. What’s more is that this movie offers characters of color –Philllipus, Artemis, (Apache) Chief– who are also superheroes but had their own agency and shining moments in the film. So much so it’s almost as if the movie is getting pushback for doing the very thing it’s accused of not doing. There was more diversity in Wonder Woman than there was in phases 1 & 2 of the Marvel Cinematic Universe. This, of course, begs the $60,000 question. Why haven’t any of the Marvel films prior to Black Panther received the same scrutiny?

Where were the discussions of intersectionality during the release of the Spider-Man films? Why weren’t fauxial justice fauxgressives pulling the receipts of noted bigot Mark Wahlberg when the Transformers films were released? The answers are simple: white privilege, heterosexism and of course misogyny.

It’s the privilege pass. The more societal privilege one has– cis, heterosexual, able-bodied, white, male, etc.– the bigger the pass they receive in society. We live in a world where people find any excuse to nitpick the marginalized and their endeavors but when it comes to calling out anything white and privileged, we’re quiet as kept.

Superhero films aren’t the only place we’ve witnessed this double standard. The political landscape is also rife with this. Case in point: President Obama. In the eight years he was in office, there wasn’t a single scandal associated with his administration. Yet he was vilified and demonized in ways no white politician ever was. One example is the fact that he was blamed for how the preceding Bush Administration poorly handled the Hurricane Katrina disaster. We also witnessed this dynamic play out during the 2016 presidential election. Despite the fact that she was clearly more qualified as a candidate, the media regularly crucified Hillary Clinton over some emails even though she was cleared of any wrongdoing.

Meanwhile, Bernie Sanders joined the Democratic Party strictly to run for president. During his campaign, his aides stole voter data from the Clinton campaign. Sanders lied about marching with Dr. Martin Luther King, lied about being endorsed by AARP and then abandoned the Democratic Party the second he lost. Then, of course, there was the issue of Sanders claiming that classism is a much more important issue than racism and wonders why nonwhite voters weren’t “feeling the Bern.” President Trump’s charges are far too many to list. His alleged sins range from being in collusion with Russia to throw the election to facing charges of child rape. Yet neither Trump nor Sanders were criticized by the media and the public in general the way Clinton was and then many wonder why the election results of November 2016 played out the way they did.

Bigotry isn’t always a bunch of misogynistic males complaining about a women’s only theater showing of Wonder Woman or racist whites getting irate over the release of Black Panther. It’s also goalpost shifting and holding minorities to absurd double standards while giving passes and excuses to the white privileged. Something to keep in mind the next time we wonder why progress hasn’t progressed.