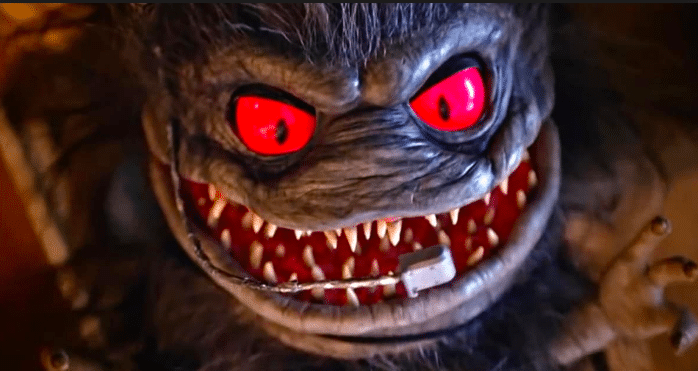 Picking up sort of where the original Critters series left off, Critters: A New Binge offers us an updated story in eight episodes of roughly 11 minutes each.

Christopher (Joey Morgan) is a high-schooler with an insatiable appetite. His mother Veronica (Kirsten Robeck) constantly shames him and even tries to starve him out of his food lust to no avail. Chris’ best friend Charlie (Bzhaun Rhoden) sneaks him pizzas and encourages him to do something constructive with his hunger: enter the town of Livingstone, Iowa’s yearly hot dog eating competition. Dana (Stephi Chin-Salvo) is Chris’ long-time crush, and her popular boyfriend Ethan (Quinn Bui) is also a prime bully. All the while, a group of carnivorous aliens of the Krite species head to Earth to rescue one of their own who was left behind years ago and is now necessary for the future of the universe.

Now streaming on Shudder as one of the network’s original offerings, Critters: A New Binge has a fun and campy 80s horror style that is a solid homage to Stephen Herek’s original film. As in the original, the hairy and multi-fanged critters are being pursued by shapeshifting alien bounty hunters whose goal is to eradicate the monstrous species that wreaks havoc wherever it goes. A New Binge is no exception. Even though the Krites have been given specific orders of “NO EATING!” the creatures can’t help themselves. The body count is enormous for just 80 minutes of screen time, including pets.

While this kind of horror comedy can be difficult to pull off unless every actor is on the same over-the-top page, A New Binge manages it along with bringing a cool indie vibe to the franchise that is fresh and funny. The cast is diverse and offers some good representation. But still, the Black best friend to a white protagonist trope is really tired.

A New Binge‘s references to other classics such as The Terminator and The Matrix are well-placed and hilarious. There is an excellent Avengers: Infinity War nod (even though jokes about Thanos’ finger snap are still way too soon for me). The critters’ makeover with better special effects and 2019’s advanced puppetry made the monsters far more realistic and grotesque than they were in the 80s, which works really well especially in high definition. Their raunchy and double entendre-laden dialogue is often laugh-out-loud funny and adds to the general sense of camp director Jordan Rubin has mastered. 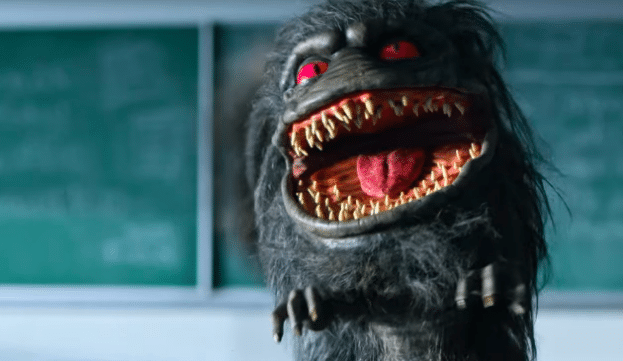 Although the mother’s food and fat shaming of her son bothered me a lot at first — and might be enough to turn away some viewers altogether — it does actually have plot relevance that makes sense by the end. Still, the language Veronica uses toward her only son, and his terrible nickname of “Pork Chop”, is as disturbing as the creatures. Verbally and physically abusing children is not cool, and because of these themes, I didn’t laugh as much as I might have had their relationship been framed less problematically for a horror comedy. The fact that Veronica is openly sexual on the living room couch with her boyfriend when she knows her son will be coming home from school was gross in an incestuous way, and that kind of sexual impropriety in front of a child could also be considered abuse. There’s just nothing funny about any of this even though A New Binge tried to gloss over it.

The micro-episode idea is unique and interesting, but I’m not sure why they didn’t simply make A New Binge into a full-length movie instead. The flow was constantly interrupted by each cliffhanger ending, and 10 minutes an episode isn’t really enough time to fully develop an arc. Because of this, the entire project feels like there was something missing. A social justice commentary would have been a strong addition to the story especially given our current political climate and its obsession with “alien invaders” from the southern border. But to this credit, the fast pace of each episode left no room for dreaded exposition and forced the story into a tight package that does work. The ending is a perfect set-up for what looks to be an interesting and fun sequel. Hopefully, they’ll address some of the more problematic aspects, which would deepen the narrative tremendously even if it remains short-form.

Overall, horror fans will enjoy Critters: A New Binge. But I’m not sure if it has the crossover appeal as some other horror comedies like the recent SXSW premiere Snatchers. While I did miss watching a horror show without explicit social commentary, I have to admit that it was a nice break to watch a bunch of little monsters play hell on a town and that be the entire plot. Critters: A New Binge is a ball of pure silliness and fun, and there is certainly an important place for stories like this, particularly during dark times. Lighthearted fun is should always be welcome, and in this arena Critters: A New Binge does shine.