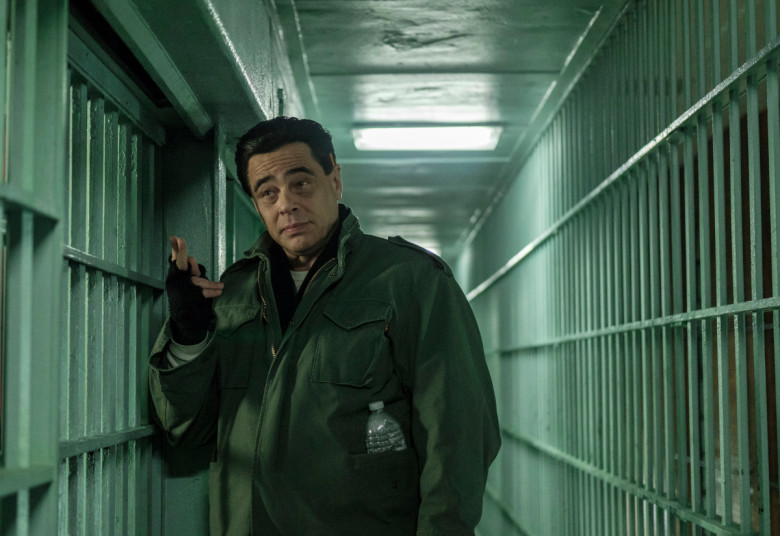 One example of America’s terrible exceptionalism is its prison system. According to the American Bureau of Justice statistics, America makes up 4.4% of the global population, but 22% of the global prison population. Worse, Blacks are incarcerated fives times more frequently than whites for comparable offenses, in particular marijuana possession. America’s prison system has been called a modern form of slavery, since prison labor is often mandatory and pays pennies an hour. The University of Virginia’s racial dot map of the U.S. is a sobering picture indeed.

Some of these dynamics are present in Ben Stiller’s limited Showtime series Escape At Dannemora, the true story of a recent prison break at Clinton Correctional Facility in upstate New York. In June 2015, inmates David Sweat (Paul Dano) and Richard “Ricky”  Matt (aka “Hacksaw” played by Benicio del Toro) escaped from the facility known as Little Siberia and evaded capture for three weeks. They were helped in their escape by Joyce “Tilly” Mitchell, the woman who ran the sewing workshop at the prison — and who also allegedly was having sex with both prisoners.

This might sound a little like The Shawshank Redemption, Papillon, Escape from Alcatraz, or The Count of Monte Cristo, all stories about innocent men who escape from prison because they don’t belong there. Escape At Dannemora is not this. Inmate Sweat was in Clinton Correctional for the gruesome murder of a cop. Ricky Matt was a serial killer who liked chopping people up after he killed them — not like Dexter, Matt was in it for his victims’ money. There is nothing heroic about either of these men, in real life or in Escape At Dannemora. Director Ben Stiller, however, certainly does his utmost to paint them that way.

While prisons in America are majority Black and Hispanic populations, the main cast of Escape At Dannemora is predominantly white. As again with tales of white devilry, Black faces and Black pain are used as wallpaper to the White experience. In real life, Ricky Matt was White — at least, I found no mention of race in dozens of articles I read about him which we know indicates whiteness. Casting Benicio del Toro to add color to the main cast was a manipulative move on Stiller’s part. Lip service to diversity instead of examining the actual social and cultural conditions of a prison like Clinton Correctional.

Del Toro’s performance is his usual schtick of late. Boorish, physically intimidating, and a quiet kind of monstrousness that would be exciting if I hadn’t seen him do this same thing over and over again these past many years.

As Tilly Mitchell, Patricia Arquette has put her name on the list of actresses who gain weight and present as ugly for the benefit of an award-sweeping role. Because what is worse than an older woman in sexual situations, than a pretty woman who makes herself unattractive in the public eye? It’s another emotionally manipulative move from Dannemora’s creators, and I don’t fall for this one anymore.

The one shining star in this seven-part series is Paul Dano’s raw and vulnerable performance as Inmate Sweat. I didn’t like his character at all. But I can’t deny the power of Dano’s openness and pain as he embodies this role. Beautiful work. If anyone deserves an award in Escape At Dannemora it is Dano, and Dano alone.

While I appreciate him wanting to branch out, Ben Stiller needs to go back to his comedy lane. His direction in Dannemora was uneven at best. This production couldn’t decide if it was a threesome sex show, a buddy escape comedy, or a true crime drama. It alternates between all three to the detriment of the story as a whole. I was shocked that Stiller would play an upbeat heist song like Elton John’s “Take Me To The River” as Inmate Sweat digs tunnels and carves into pipes below the prison for his and Matt’s escape. These are two murderers, in jail for murder. I half expected Sweat to fling his pickaxe over his shoulder and give us a Blue Steel strut. It was weird and inappropriate. And there were a tiresome number of examples of a tone deafness that comes with Stiller’s level of white privilege.

While the cinematography added a great deal to the location of Clinton Correctional and its environs as a character in the story, long camera shots showing how remote and cold the prison is, it wasn’t enough to make up for the unevenness of the rest of the production.

But the social justice cluelessness and whitewashing is really what’s been stuck in my craw since the opening episode. Why do we need seven-and-a-half hours about three terrible white people who did terrible things, in an event that only happened three years ago? Every day DNA evidence is freeing innocent Black men from prison. Why not these stories of actual redemption, rather than a bored white woman and two murderers who cook up a prison break? I object to the entire premise of Escape At Dannemora on the basis that it is the least representative narrative in years reflecting American prison society and culture. This is my first reminder of the new year that whitewashing is a calculated act of racism. Stop it already.

What Escape At Dannemora does accurately reflect, though, is the myriad functions of white privilege. “I didn’t do anything wrong,” Tilly says in her nasal Midwestern-ish accent. “I mean, not really wrong.” A catch-phrase that only got more irritating with every ad for Escape At Dannemora. This is a woman who was not only having sex with inmates but who brought them hacksaws and other tools to help them escape. And she doesn’t think she’s done anything really wrong? Wow. White women live in a different world than women of color, that is for damn sure.

Escape At Dannemora would have been better served as just a movie, and maybe on a much-later anniversary of the incident. We really did not need another exploration of white devilry presented as a twisted heroism. In fact, we don’t need any more stories like this on screen at all. If your American prison movie predominantly features white characters, go back to the drawing board and start again.