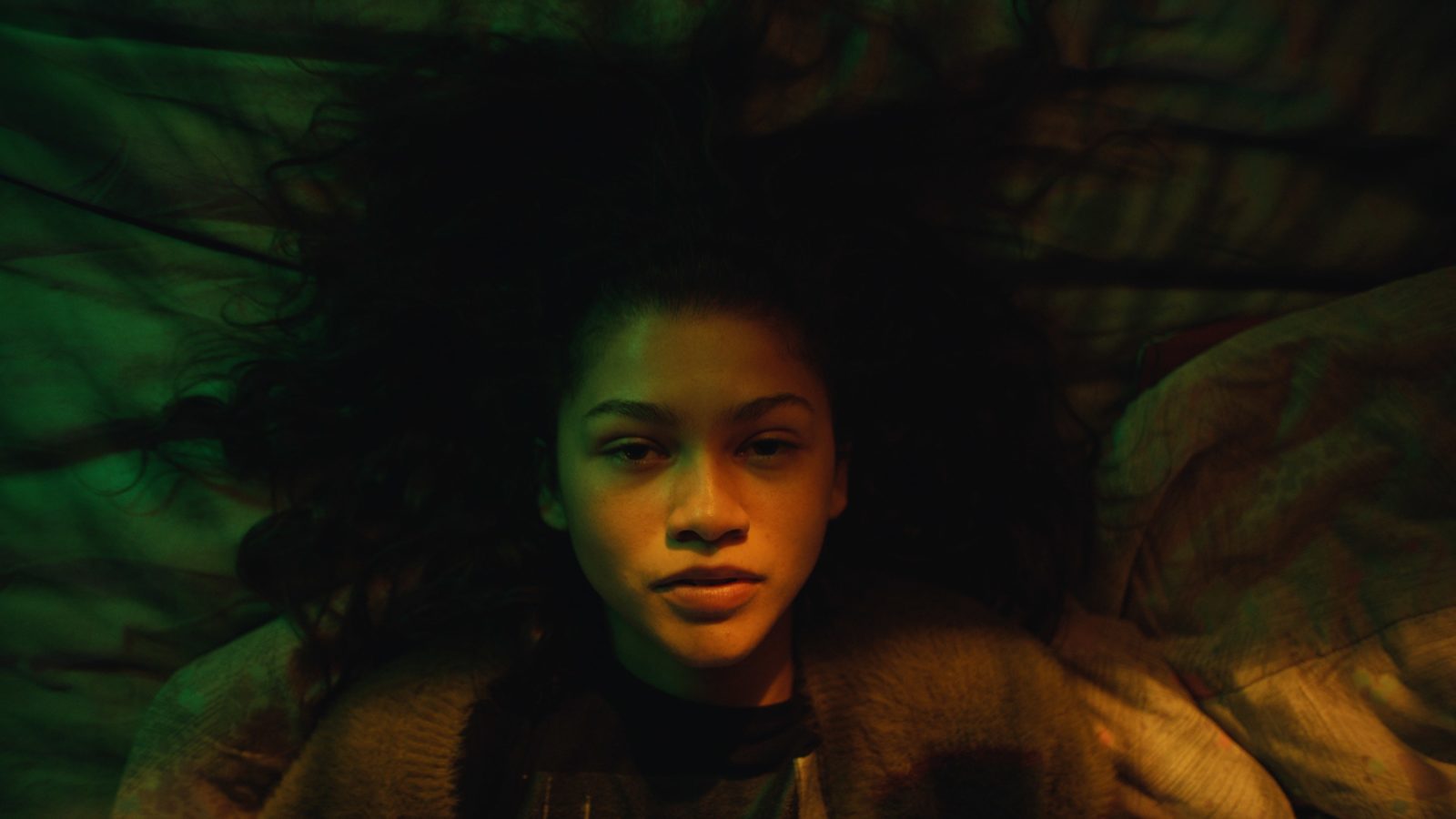 September 11, 2001 was a day that split our timeline into a before and after, on personal and global levels.

Kids born just after that horrific event when the Twin Towers fell will be of legal age to vote come autumn of 2019. And what a world they have lived and experienced in that trauma and tragedy’s shadow. So much that they will do just about anything to escape from their reality.

Born just three days after the 9/11 attacks, Euphoria’s Rue Bennett (Zendaya) has grown up in an increasingly chaotic world that she didn’t have the capacity to process. Diagnosed with everything from bipolar and anxiety disorder, to ADHD, and even OCD, Rue has had a personal home pharmacy since she was eight years old. “I don’t remember much between the ages of 8 to 12. Just that the world moved fast and my brain moved slow.” But it’s after the cancer diagnosis and subsequent death of her beloved dad as a young teen that she properly gets into recreational drug use. Now, freshly sober after a virtual lifetime of drug use and abuse as well as a near-fatal overdose, Rue returns home after a summer of rehab just before her junior year of high school. With absolutely no intention of staying clean. 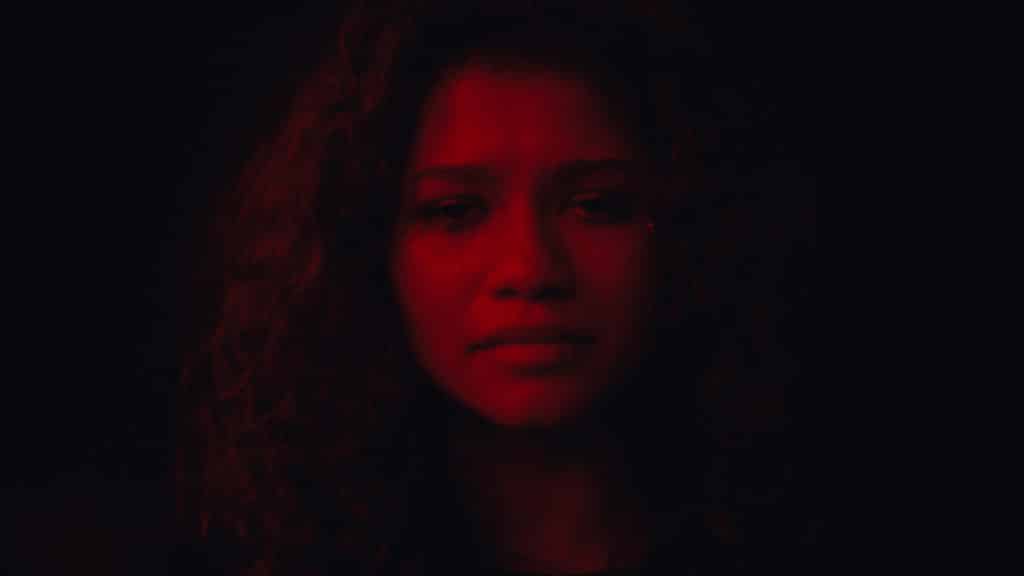 Created by Sam Levinson, and currently airing Sundays on HBO, Euphoria is a dark dive into the addictions and escapism of a group of suburban teens living in the middle of nowhere. Drugs are far from the only tool they are using to not think about the toxic state of the world. Social media and sex — and where the two intersect — are another popular escape method for Rue’s peers. Jules (Hunter Schafer) is new to the town and has taken to a hook-up app to explore her burgeoning sexuality as a young trans woman. One of many things that makes Schafer’s Jules so beautiful is that her storyline isn’t one of transition — like so many trans narratives get pigeonholed. She knows exactly who she is. What she doesn’t know is what she likes yet. Going on this journey with her is amazing. But also terrifying. Schafer is hands-down the breakout star of Euphoria. 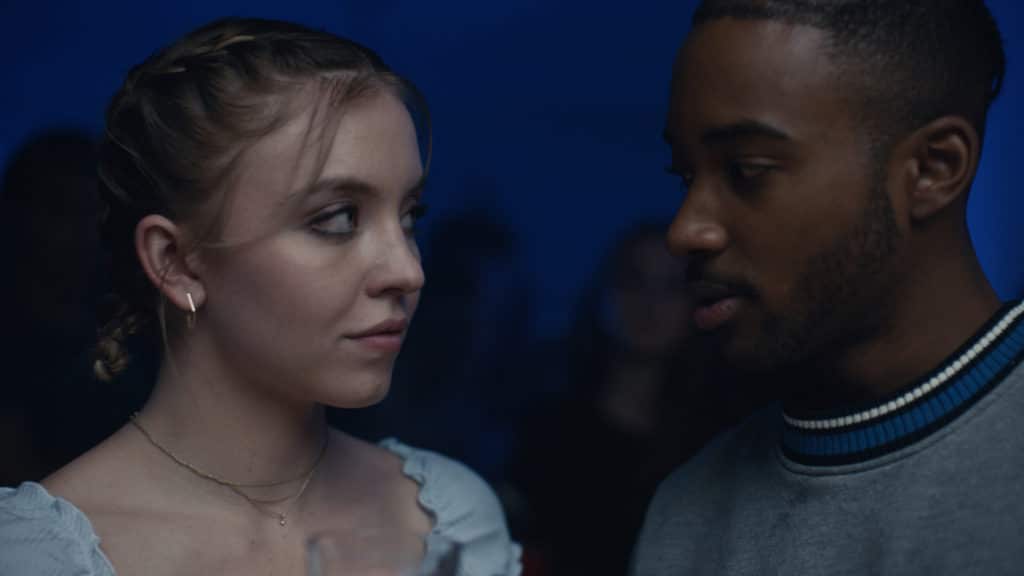 Nate (Jacob Elordi) is a closeted football star obsessed with working out and performing masculinity after finding his father Cal’s (Eric Dane) homemade stash of gay porn when he was eight or nine years old. Nate’s dad finds out that he saw the videos, and essentially tells his boy that he always suspected he was gay. That Nate will have to work his whole life to keep it a secret unless he wants to fail. In a moment of instant internalized homophobia, Nate becomes a poster boy for toxic masculinity and white male violence. The reverse Carrie locker room scene with Nate trying not to look at his teammates’ genitals is a statement just by itself. Euphoria isn’t afraid to show anything on-screen, including lots and lots and lots of penises.

These are just a few snapshots of the three-dimensional characters biking and driving around Euphoria’s world as they try to navigate addiction, politics, reality, sexuality, and identity as Rue narrates her and her classmates’ (and their parents) growing web of connections. Some good. Some bad. Some against the law.

Zendaya has taken an entire Neo leap away from her old Disney persona to play a haunted and damaged young woman whose addiction feels like the only meaning in her life. Her performance is raw and vulnerable, and her eyes so expressive I often forget that she’s the one-named superstar who once was a poster girl for Disneyfied wholesomeness. We are certainly not in Kansas anymore, Toto. Not with this role. Not with the level of intensity she channels. It’s also amazing to see her multiracial family at the center of a story, without it being a big deal. It just is. 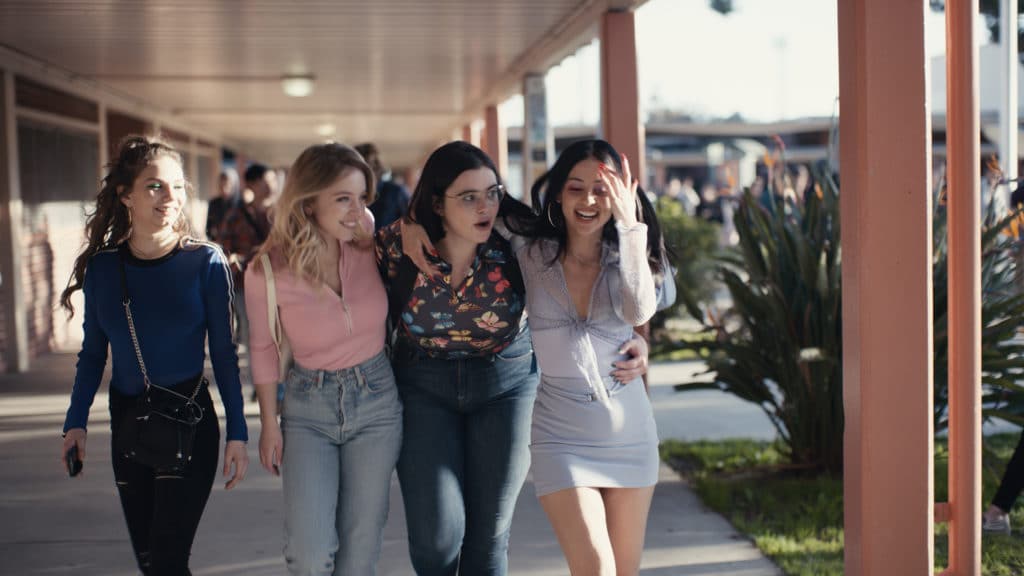 But the positives of representation and inclusion aside, I can’t help but be troubled by what I’ve seen on screen in these first two episodes of Euphoria. All of the actors are in their 20s, but since they are playing teenagers (and all look their screen ages) it’s really uncomfortable and honestly creepy to watch such graphic sex acts playing out among these young kids in sometimes harsh detail on screen. Is this because I’m significantly older than both the characters and the actors playing them? Absolutely. It’s also because I’m thinking about grown men who will be watching a teen drama not at all for its social commentary and message of inclusivity and connection, but rather for the titillation and possible sexual gratification it provides with so much visible young flesh. *Shudder*

Yes, the show is making some strides to call out pedophile and rape culture and the overt hypersexualization and sexual objectification of young women. At the same time, it’s also reinforcing both of these dangerous and disgusting cultures through on-screen choices. Do we really need another high-school teen sex and drugs show? Riverdale, Sabrina, etc aren’t enough? Now we need these shows on prestige cable where nudity and choreographed sex scenes can be exploited further? I’m gonna say no. This aspect of the show upends much of the good work it is doing.

To problematize it even further, Drake is an executive producer of Euphoria and he has sexual assault allegations under his belt, pun terribly intended. There is even video footage of him groping a 17-year-old girl’s breasts on stage, even after asking her how old she is and she confirming she’s underage. It’s really inappropriate that someone accused of an alleged sexual assault and publicly fondling a minor’s breasts with impunity would be involved in a show that has teenage sex as one major aspect and in particular way, too many examples of statutory rape. No matter how excellent the rest of Euphoria’s first season might be, I will not be able to overlook the shadow Drake casts over it.

I’m faced with another moment of pop-culture quantum physics. The treatment of teenage sex on screen, in particular, is extremely troubling and disturbing. At the same time, as huge a problem as this is, I also can’t help but wish a show like Euphoria had existed when I was in high school myself. A narrative like Euphoria that puts it all out there with such rawness, vulnerability, and honesty on so many levels really would have made a difference to how I saw myself and my peers. And with social media in the mix now, I think a lot of people are going to see their own reflections in this show. Euphoria is real in a way that other teen dramas are not.

Even for its issues, I do believe Euphoria is a show that will help people, both young and older. How naturally and compassionately it is tackling some of the hardest issues of the current day and age is remarkable and poignant, especially as it concerns addiction and social media. The production value is also visually stunning as the story unfolds. I have my fingers crossed these aspects will rise above the more problematic ones by Euphoria’s end.