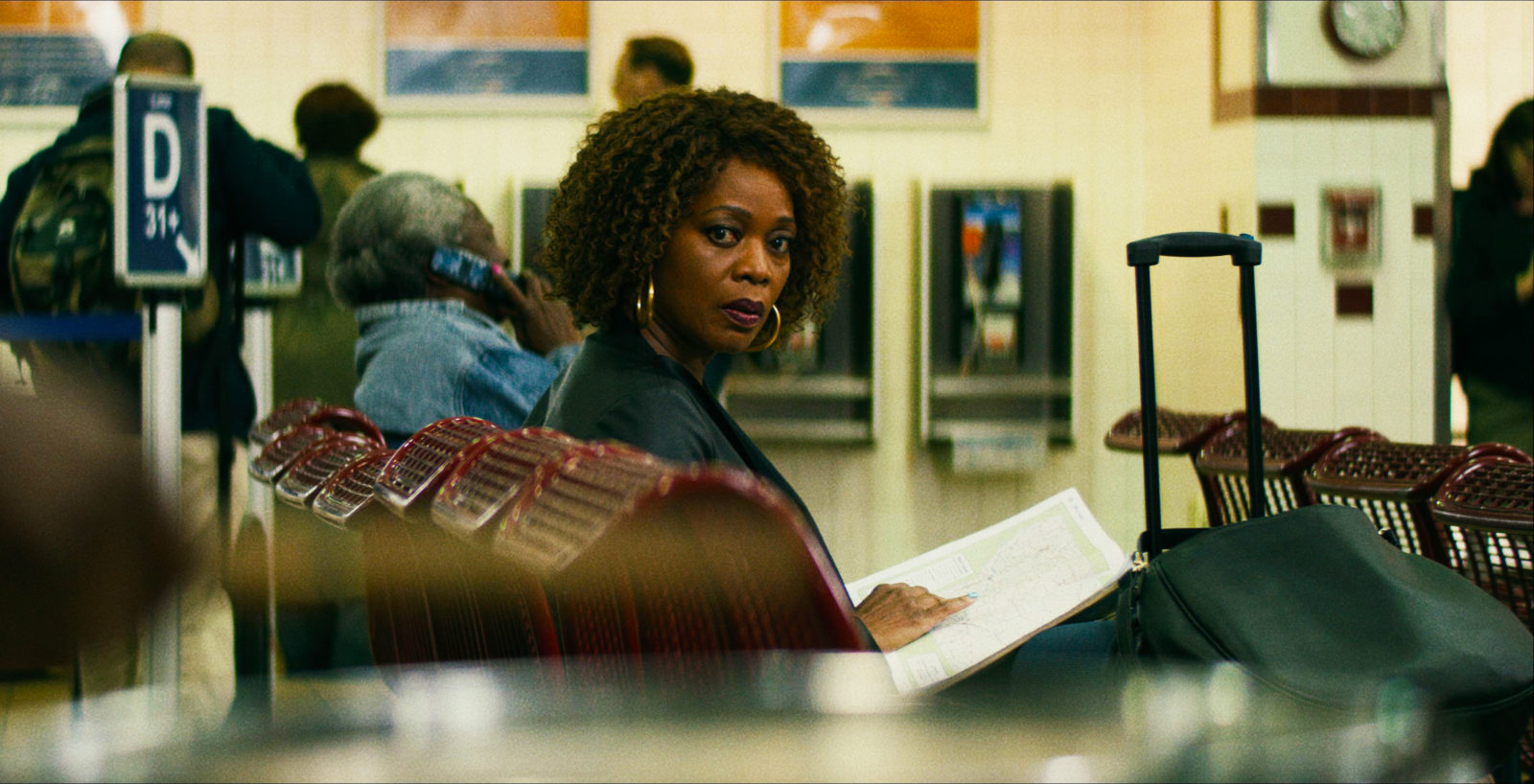 Based on the novel “Dancing on the Edge of the Roof” by author Sheila Williams comes a beautiful on-screen adaptation starring Emmy Award-winning actress Alfre Woodard. The film Juanita is executive produced by Woodard and written by her husband Roderick M. Spencer.

As the eponymous Juanita breaks the fourth wall and speaks directly to the camera in a Ferris Bueller-kind-of-way, she shares the messiness of her home life raising two grown kids by two deadbeat fathers and a grandchild. She has a third son, her oldest, currently incarcerated for a weapon possession charge, and she’s ready to start a new slate and just get away from drama created by her past.

She uses moments to escape by daydreaming about a shirtless Blair Underwood (who essentially is playing himself), somehow looks exactly the same during his TV days of L.A. Law. The scenes shared between Juanita and Blair remind me of my own silly daydreams, and how this fleeting imaginary spell feels the most authentic to me outside of the four corners of my own reality.

Juanita does, what probably many of us have thought to do at one point in our lives — she takes on a road trip to nowhere. And inevitably, the place that she ends up escaping to, is one that will change the course of her life dramatically. Juanita leaves her hometown of Columbus, Ohio and sets herself on a journey and purchase a one-way ticket to Butte, Montana.

Juanita meets a kind stranger named Peaches (Ashlie Atkinson) along the way. Peaches is a tomboyish truck driver by trade and a mordantly funny sweet talker who manages to get your guard down if you let her. Juanita hops in with Peaches just moments after meeting her in a diner and drops her off in a small town called Paper Moon.

It is in Paper Moon, where Juanita meets an attractive restaurant owner and chef named Jess Gardiner (Adam Beach). Along with the lovely French cuisine Jess serves, he’s also serving something else to Juanita which, wasn’t at all what she was expecting. The two forge a romance and now Juanita has to choose between continuing her excursion and moving on or staying in a place where she’s found love and friendship among the locals in the small town of Paper Moon.

Juanita might have the trappings of your typical rom-com: city girl meets country guy, and though the two couldn’t be any more different, and they inevitably find some common ground. However, there is something unique about this story. It’s not a How Stella Got Her Groove Back kind of tale — since the age difference between these characters is not that significant. And it’s not a Jungle Fever kind of tale simply because there is an interracial relationship between an African-American woman and a Native-American man.

The movie is in a class of its own, as a story about a woman who just desires for the opportunity to take a second chance at life, and just so happens to make a stop in a small town that changes the trajectory of her journey. Juanita reminds us that sometimes by taking a small step out on faith, no matter what that looks like, can lead to experiences and moments in our lives that could lead us to something greater than what we could have ever expected.

Both Woodard and Beach have this on-screen chemistry that is palpable. Beach plays Jess as this intriguing, mysterious, yet charismatic character on the screen and he reels you in at every turn. It’s shocking that Beach hasn’t played a romantic lead in more movies, because he’s a natural.

Seeing Woodard deliver a poetic performance in a lighthearted comedy like Juanita was certainly a departure from her brilliant role as a prison warden in Clemency premiering at Sundance this year. Woodard is certainly someone whose name should be mentioned if not twice, at least once for awards consideration.

Juanita is produced by Stephanie Allain (Dear White People, Something New) and directed by Clark Johnson, most notably known for his work in television (Luke Cage, The Purge).

Juanita is filled with humor, love, and liberation — it’s a bright shiny gem among today’s crop of rom-coms.