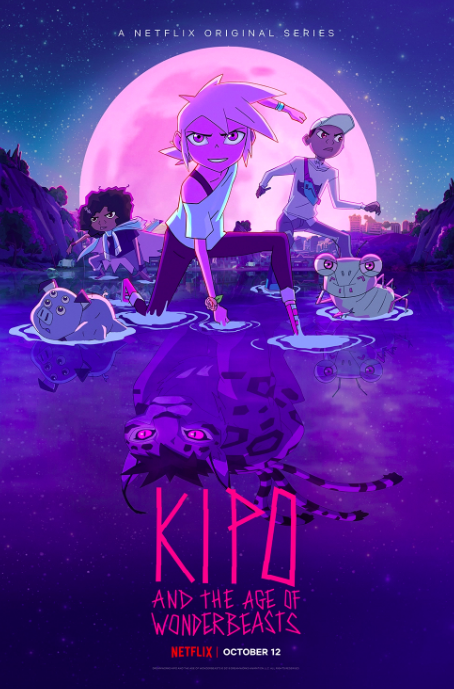 DreamWorks and Netflix have done it again! The spectacular and well received series Kipo and the Age of Wonderbeasts is reaching its climactic conclusion with its third and final installment.

The creators of the show Radford Sechrist and Bill Wolkoff and their writers have done a magnificent job of crafting a narrative so well developed that it has managed to melt the hearts of even the most cynical among reviewers this year. The second season ended with a tense moment when Kipo and her friends had trapped Scarlemange (also known as Hugo), but in doing so, this has led to a bigger threat to appear: Dr. Emilia (Amy Landecker). With Kipo and her friends forming a new coalition that includes humans and Mutes, the fate of the world rests on their shoulders.

Kipo and the Age of Wonderbeasts illuminate two perspectives: one is returning life back to the familiar past, and another embracing change for the future. The kind Kipo Oak (Karen Fukahara known for her role as Glimmer in She-Ra) along with her friends, brave Wolf (Sydney Mikayla), chatty Dave (Deon Cole), and cool Benson (Coy Stewart) are on a journey to help everyone live a peaceful life. This peaceful existence goes counter to what Dr. Emilia wants for humankind. Dr. Emilia hopes to cure all mutes and revert life back to how it was when humans ruled the world.

The final season is the most marvelous one yet. In Season 1, viewers discovered that Kipo is part Mute and her journey to find her father leads to that understanding. In Season 2, she discovers how to balance both sides of her identity and in the process gains a better insight on her mother. And now in Season 3, all aspects of herself as well as other Mutes and friends come together to try to protect the world she loves.

There are so many things to enjoy from Season 3. One of them is how the show subverts expectations, even when it seems clear it is going one direction. The show manages to change and evolve in ways that make the show feel like innovative and exciting with every episode.

HMUFA (Human Mute Ultimate Friendship Alliance) is Kipo’s attempt to get everyone to cooperate and defeat the evil Dr. Emilia. However, through the series, Kipo finds that an ultimate friendship alliance is not as easy to procure as she envisioned. The message behind the union is a powerful one, enforcing the ideas that we are not destined to repeat the mistakes of the past; what our ancestors could not accomplish, the next generation can.

Aside from the exciting titles every episode has, like “A Wolf in Wolf’s Clothing” and “Song ReMix,” Kipo and the Age of Wonderbeasts has included animated scenes with a K-Pop band that is composed of many unicorn dolphin hybrids. Much like the previous season, this season’s soundtrack continues to delight with the help of their new band. These unicorn dolphins deliver a musical dance performance that will make even the most grownup among us want to sing along. Between their musical talent, their amazing choreography, and their signature poses, this band really fills out the wonder in this must watch series.

The journey of any hero is to find a way to make the future of the world a better place, and often this means facing their challenging past. That is what Kipo and her friends attempt to do against all odds. The last season is filled with personal traumas for each individual to face and overcome. Characters like Wolf, Dr. Emilia, and Scarlemange (Dan Stevens) all have a past that is less than perfect, but what this series carefully curates is the ability for each character to grow and to change. Each one makes a choice for how they want to live their lives, and it is those choices and the journey that each one of them takes that adds to the richness of the story. Seeing if they are able to confront their past and their own troubles is what makes this series so relatable for the next generation. It allows for people to be seen for more than just their past mistakes — it allows them to be seen as human.

Watching each and every episode of the third season brings a feeling of warmth to anyone who watches it. With each viewing, the relationship between Mutes and humans deepens and develops. Of these relationships, the main characters’ friendships also intensify. Kipo and Wolf’s relationship is a strong one, but the one that rivals theirs is between their male counterparts. One of the most anticipated relationships of this animated show is the blossoming one between Troy (Giullian Yao Gioiello) and Benson. Their playful, fun, and joyous relationship develops even deeper in this season. It is one of the most remarkable portrayals of people of color in an animated series. This is one aspect that deserves attention.

Kipo and the Age of Wonderbeasts is a fun, family friendly series with a lot of heart and love. This amazing series is one of the few times that gay representation is possible in a family animated program. Netflix, DreamWorks, and the creators of the show, Radford Sechrist and Bill Wolkoff, have reinvigorated representation in ways that positively promote and support many. With such an amazing show at its final season, what better time than now to grab all your friends for a streaming party to celebrate a fantastic ending to a great show.

Kipo and the Age of Wonderbeasts is currently streaming on Netflix.