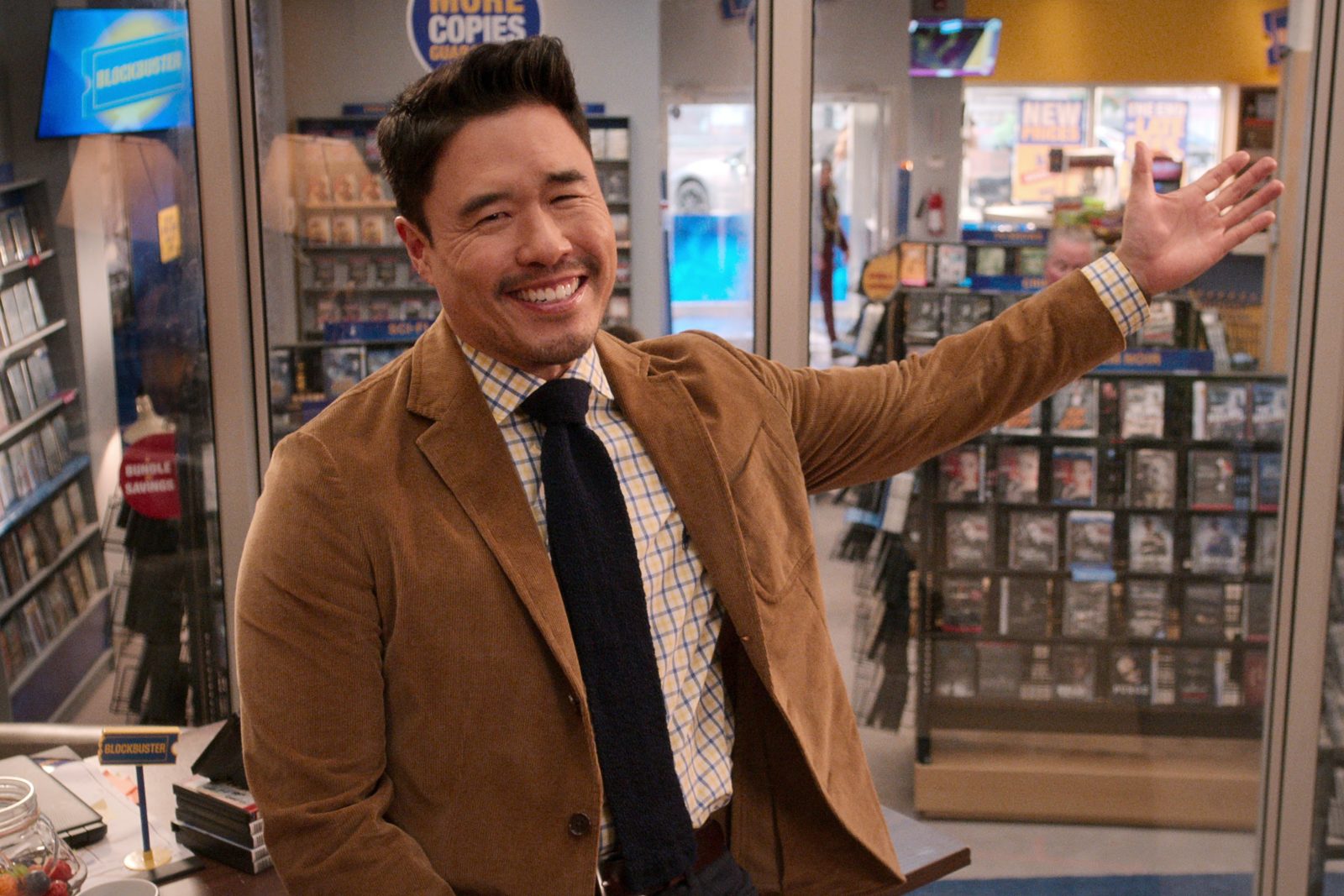 In September 2000, Blockbuster CEO John Antioco turned down the opportunity to join forces with a little company known as Netflix for $50 million, having them handle the online DVD-by-mail side of things while Blockbuster put its focus on in-store rentals.

Twenty-two years later, Netflix is thriving and ironically, debuting an original series about the last remaining Blockbuster. But the workplace comedy, created by showrunner Vanessa Ramos (Superstore, Brooklyn Nine-Nine), doesn’t spend its time roasting the formal rental giant’s poor business decisions. It’s all about the days of in-person conversations about movies that no algorithm can replace. Blockbuster is also about coming together in the face of possible closure at any moment and how absurd life can get.

The super optimistic Timmy Yoon (Randall Park) loves everything about his job as a store manager at Blockbuster in Michigan, a place he’s worked since middle school apparently. His employees are more like his family, which makes things difficult when he finds out they’re the last operating Blockbuster in the world. Timmy is the heart of the series because no matter what life throws at him he smiles and keeps a positive attitude even though he’s panicking on the inside. His longtime crush Eliza (Melissa Fumero) left to pursue her big Harvard dreams but dropped out after one semester, married her high school boyfriend, and had a daughter. Now she’s back working retail and going through a divorce.

Having worked at Blockbuster around the time everything went downhill, I can attest to the show’s accurate portrayal of the various personalities of Blockbuster employees. There’s always at least one aspiring filmmaker, and here it’s Carlos (Tyler Alvarez), the resident movie genius with more knowledge of film history than anyone else in the store — especially his coworkers who “don’t really know a lot about movies” like Hannah (Madeleine Arthur). She may be a little naive but she’s too sweet not to love.

Everyone’s Blockbuster mom Connie (Olga Merediz) isn’t a big movie buff either but she’s a people person who genuinely enjoys working there, unlike 16-year-old Kayla (Kamaia Fairburn). She’s the sarcastic teenager who looks like she’d rather be anywhere else and spends more time on her phone than actually working. Her dad Percy (JB Smoove) happens to be Timmy’s best friend, owns the entire strip mall, and runs the party supply store nearby. They have the recognizable dynamic of a dad trying too hard to be in his kid’s life and a daughter who can’t have a conversation without insulting him.

Blockbuster’s cast of characters is one of the best parts of the series. Each of them has hints of an archetype but the writers developed them in a way that makes them both unique and familiar. As Randall Park told EW, it’s a show about everyday working-class people. “I feel like this show captures that perfectly and it doesn’t make a huge statement about it — it just reflects the reality of our world.”

For example, Carlos is the college-aged wannabe Tarantino who makes obscure movie references and gives the best recommendations. But he’s also the son of immigrants and feels a responsibility to be what they want him to be. He tells Hannah about learning English from watching movies, showing that his love of the medium goes beyond just entertainment.

There are more touching moments between the coworkers since everyone has their own struggles outside of working for a company as it collapses. The series revolves around how they handle the transition from corporate to franchise/small business.

With it being loosely based on The Last Blockbuster documentary, I feel like this could’ve easily been another mockumentary-structured workplace comedy and I’m so glad it’s single-camera. As one would expect, the majority of the show takes place inside the Blockbuster store, with its obnoxious yellow and electric blue color scheme that fuels our nostalgia. The store I worked at didn’t have an actual break room with a TV and a vending machine, and the manager definitely didn’t have a big office. It’s probably different for other stores, though, especially franchise locations like the one in the show.

The biggest theme in the series is the lack of and need for human connection. Several people in the documentary talk about that being one of the things they miss the most about Blockbuster. Streaming is convenient and usually offers a massive library. But some still appreciate the Blockbuster era, like Melissa Fumero, who said, “It was such a staple of childhood…I feel like now, I just took it for granted.”

Blockbuster is a feel-good show with relatable characters and a lot of heart. It’s a nostalgia-heavy look into the lives of people working at a dying company that they still love. Randall Park is his usual charming, hilarious self as Timmy Yoon, a guy who loves movies, human connection, and most of all, his employees.

To quote one happy customer in the series, “Algorithms can suck it. Long live Blockbuster!”