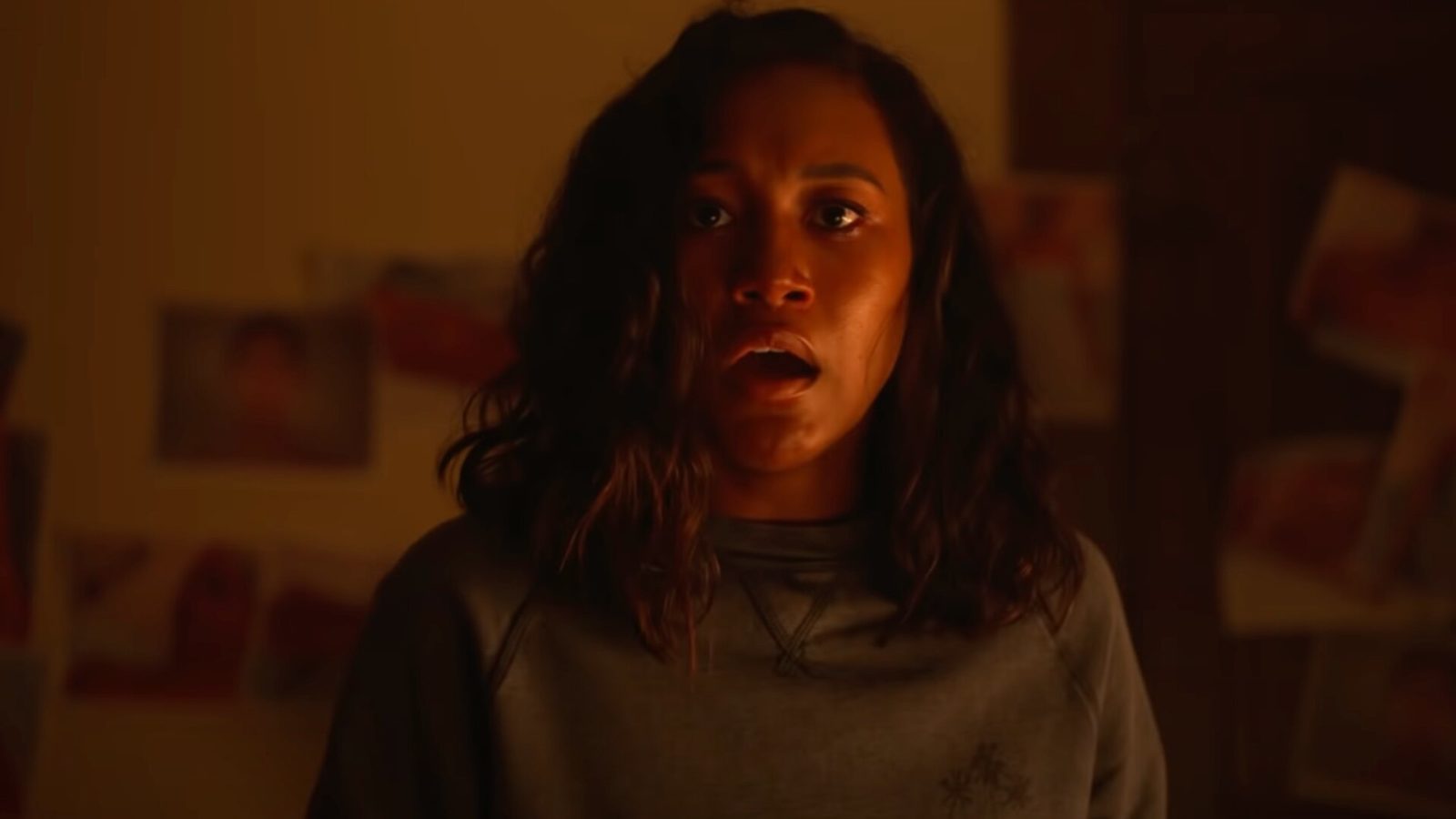 Netflix’s latest horror flick There’s Someone Inside Your House aims to set itself apart in the teen slasher subgenre. Directed by Patrick Brice (Creep) and written and co-produced by Henry Gayden (Shazam!), the film succeeds in delivering a fresh take on a well-known formula.

Based on the best-selling novel of the same name by Stephanie Perkins, There’s Someone Inside Your House follows Makani Young, a recent transfer to Osborne High. After a traumatic incident back home in Hawaii, she moves to small-town, rural Nebraska to live with her grandmother and finish out her senior year of high school. Makani is accepted into a friend group of outsiders — Alex, Rodrigo, Darby, and Zach. One night, a star football player is murdered, and before anyone finds his body, everyone in town is sent a mass text detailing his involvement in the violent hazing of a gay teammate. When a second, equally detestable teen is brutally killed and their body is put on display in church, people start to notice a pattern. Before they were killed, their darkest secrets were exposed.

In an attempt to survive not only the possibility of death but the humiliation of everyone finding out their secrets, the teens throw a “secret” party. The goal is to air out all their dirty laundry, leaving the killer less motivated to kill them. It’s very Cherry Falls, a cool nod to an ’00s slasher that’s often forgotten.

The opening of the film is tense, playing to genre expectations, then throwing in a few twists. Instead of killing off an innocent character, the film chooses someone instantly unlikable. His past contemptible actions are revealed in photos posted all around his house, showing a cruel hazing “gone wrong.” At that point, we’re basically rooting for the killer.

The central mystery — who is the masked killer — isn’t as intriguing as it should be in a film like this. There aren’t a lot of suspects, and the person everyone initially blames, Ollie, is such an easy target that it’s obviously not him. Most will probably figure out who the real killer is less than halfway through the film. The final reveal is underwhelming, but still holds some dark comedic value.

There are a few funny moments, like when Jackson’s teammate Macon says his friend “took a knee in the game of life,” while pouring one (Monster Energy) out at his school memorial. However, the tone is inconsistent to the point that it’s distracting. It’s a horror thriller with a dose of YA romance, forbidden love, and secret crushes.

The cast of There’s Someone Inside Your House is made up of talented young actors, with a standout performance by Sydney Park. Makani isn’t the typical final girl. She easily could’ve been a one-note scream queen, but Park is a sympathetic, nuanced protagonist. She’s definitely the most interesting character in the whole film.

Even in 2021, a woman of color as the lead is rare and should always be celebrated. Asjha Cooper admitted: “I was surprised that I was even cast honestly. When I saw ‘Sydney, lead, a person of color,’ normally that’s how it goes. There’s only one, so I was very surprised that they allowed another person in the friend group, another lead character, to also be a person of color.” The diversity doesn’t feel too performative or forced, and it shows a pretty realistic group of multicultural friends.

The film is in the vein of the ’90s and ’00s slasher revival era, drawing comparisons to Netflix’s recent Fear Street trilogy. The film is self-aware but avoids being over-the-top meta. Thankfully, the dialogue isn’t as cringey as Fear Street — or every other film that attempts (and fails) to capture how teenagers talk.

There’s Someone Inside Your House is Scream meets Pretty Little Liars for a 2021 audience. It’s entertaining and character-driven, with a great performance by Sydney Park. The tone is unsure of itself, switching from a semi-campy slasher to a teen romance drama, but it’s worth a watch this Halloween season.

Those hoping for an all-out gore fest will likely not enjoy this film. But if you’re looking for something different or if you don’t like to be scared, you’ll find it a refreshing addition to the subgenre. There’s a decent amount of gore, but the kills aren’t too shocking or creative.

There’s Someone Inside Your House begins streaming October 6 on Netflix.