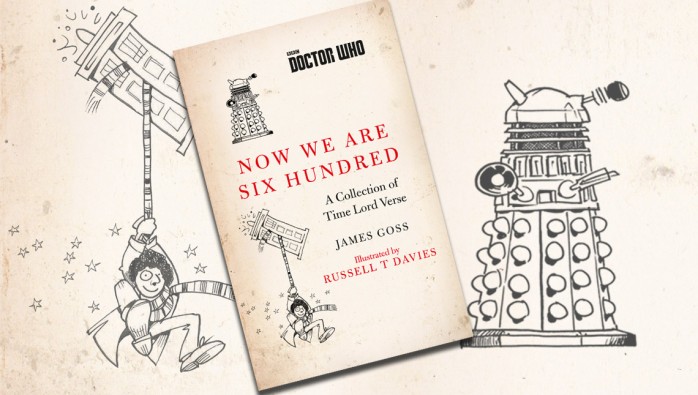 Now We Are Six Hundred is the Doctor Who book you didn’t know you needed. This slim hardcover contains poems featuring a variety of Doctors, Companions, and Villains.

What surprised me the most about about this book was Russell T. Davies artistic talent. I thought it was a mistake at first when I saw him as the illustrator because he is best known for his writing skills on ‘Who’, Torchwood, and The Sarah Jane Adventures. The illustrations are very good as you can see on the book jacket.

The book opens with a “Beforewards” where we see Figment (a dead ringer for Piglet), walking through the Thousand Year Wood. Figment discovers a strange blue box in the snowy landscape. He wonders about it briefly and then moves onwards in the snow.

There are two ways you can approach this book. First you can just read the poems as they are presented. No matter what your level of fandom is, you will be able to enjoy this book. After a few pages though, I noticed that most of the poems had an “after” in parenthesis.

This is a clue to the reader that the theme or rhythm of the poem is based on another poem. So the second way to approach this book is to also look up each poem that inspired Goss’s poems. After reading the book, I went back and looked up the companion poems and read those as well. It added a deeper dimension to my enjoyment of the book.

This book ends with an “Afterwards” with Figment and a post-script poem celebrating Verity Lambert, the first producer of Doctor Who. Verity’s poem turned out to be my favorite.

‘Verity’ celebrates how Lambert stood up to the males at BBC who questioned a lot of her choices on the show. Verity survived all the doubts and crafted the fundamental elements that make Doctor Who such a fan favorite.