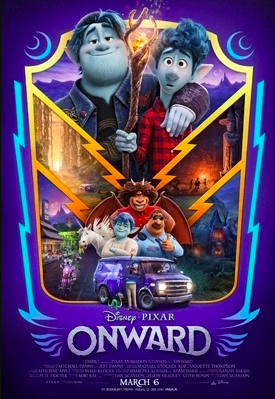 Pixar Animation Studios has become synonymous with making animated films that get you in your feelings and make you ugly cry in a room full of strangers.

This is why everyone will understand when I say that, in true Pixar fashion, Onward is another fantastic animated film that pulls at your heartstrings. It has a range of emotions and a good story to boot. When the story is based on real-life experiences, it makes sense that real-life emotions would exude from the film. This is the first Pixar animated film to ever tackle magic. It works. Thanks to the passion behind the story, the approach to magic, and the voices that bring these characters to life, Onward is a creative and fantastical adventure that I want to see again and again.

Onward was directed and co-written by Dan Scanlon. Scanlon is best known for his work on Monsters University, which he directed and co-wrote as well. Onward stars the voice talents of Tom Holland (Ian Lightfoot), Chris Pratt (Barley Lightfoot), Julia Louis-Dreyfus (Laurel Lightfoot), and Octavia Spencer (Manticore). The film is set in a suburban fantasy world where two teenage elf brothers, Ian and Barley Lightfoot, live with their mother. Their dad passed away when they were both young. Ian was too young to remember him at all. Onward follows Ian and Barley as they go on a quest to find if there is still magic left in the world to help them spend one last day with their father.

The story is based on the real-life experiences of director Dan Scanlon. He really put everything out there, and he succeeded with a beautiful film. They say the best writing comes from writing what you know. Onward is a fine example of that idea. Scanlon drew on his own experiences with his brother. They lost their father when they were both too young to remember him. As an audience member, knowing that makes me appreciate the scenes even more. The way the brothers interact with each other, the need to hear someone’s voice long after their gone, and the family dynamics that come from a single mother with two boys are all reasons why this story succeeds. It also makes total sense to tell the story with magic. In the midst of loss and tragedy, we all need and want a little magic in our lives. This sentiment comes across clearly within the story. It is relatable to all families, regardless of if they’ve lost someone. It’s a real glimpse into the storytelling process and how it pays to be honest while using your imagination. The story is sweet, family-friendly, and something special to experience like so many other Pixar films.

The experience of Onward is heightened by the fact that this is Pixar’s first attempt at a film about magic. We have seen monsters talk, superheroes with powers, toys come to life, even cars talk, but never the use of actual magic in a Pixar film. There is a real difference between the existence of trolls and the existence of trolls in a universe with magic. It adds a childlike reminder that used to stem solely from Disney animated films. Disney is all about the magic, so it was only a matter of time before Pixar took some pages out of their book. It works well with the animation and story prowess that Pixar has been known to achieve. Magic works well with the story because it’s used in a specific and purposeful way. It weaves its way into the story seamlessly. The use of magic also coincides with the role-playing game Dungeons & Dragons. It’s always a cool thing when films call out the nerds that we all are. The downfall, in my opinion, was that there was not enough D&D-playing on the screen. The character Barley Lightfoot was clearly playing the game at some point during the film, and it would have been nice to see the game in action. It was a very cool idea to have the brothers go on a quest based on the game.

When it comes to the voices used to bring these fun characters to life, the casting could not have been more perfect. I want Tom Holland and Chris Pratt to be brothers in real life. It worked extremely well on screen. I know it probably helped that they have starred in films together before (Avengers: Infinity War, Endgame). Tom seemed to be at ease in the awkward headspace of Ian Lightfoot. Chris seemed to be the big brother that we all wish we had. He’s unpredictable, embarrassing, loving, and there when you need him the most. Octavia Spencer as the Manticore is hilarious. Her comedic timing is perfect. The chaos and need for adventure easily flow through her voice. Julia Louis-Dreyfus is always a comedic good time, but the balance of loving, protective, and fierce mama elf was there as well. Pixar doesn’t seem to get it wrong with their voiceover actors. They are spot on every time. The cast of Onward is very enjoyable.

Onward is nearly perfect. It has some ideas that could have been fleshed out more, but overall an enjoyable film that children and adults will love. Onward will arrive in theaters on March 6.