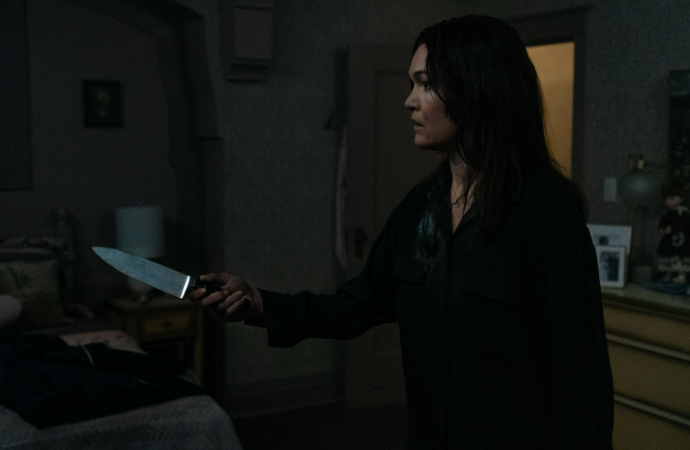 *This review includes spoilers of Orphan and Orphan: First Kill.

Jaume Collett-Serra’s 2009 family drama horror Orphan had mixed reviews on its opening: Roger Ebert loved it, and Entertainment Weekly gave it a D+. In the years since its villain, Esther/Leena (Isabelle Fuhrman) has become an iconic addition to the scariest children on the screen of all time. But Esther isn’t actually a kid. She has hypopituitarism that causes her to present as a child when she’s actually in her 30s. That shocking twist in the original was masterfully brought to life by a 10-year-old Fuhrman. A real-life surprise was finding out that a child actor had brought such nuance and depth to an extremely complex, full-grown woman character and a serial killer.

Orphan was also unexpected in many ways.It was a moving portrait of a family post-trauma and a horror film with its fair share of jump scares, gore, and assorted violence against children. Collett-Serra’s unique vision took what could have been pulp storytelling into another director’s hands and made it not just realistic, but framed in gorgeous cinematography and set design for maximum emotional effect. Its prequel, Orphan: First Kill, a Paramount+ original feature, takes an entirely different approach to the subject material, and it’s not for the best.

Orphan: First Kill opens in Estonia in 2007, two years before the events of Orphan, where we meet “the most dangerous patient” at Saarne Institute for the criminally insane. Because Leena is already a killer with at least four victims, the institute has implemented rigid security protocols for her. They still do not stop Leena from a fresh murder spree and an escape. There is a major tone shift from Collett-Serra’s serious family drama with horror themes woven through, to First Kill’s straightforward campy slasher horror.

Gone is the multilayered Esther whose madness only emerges when absolutely necessary. Instead, we have a caricature villain who might as well be rubbing her hands together before she crimes like a cartoon character. After murdering her new art therapist and using her apartment as a staging area for her next moves, Leena finds the profile of a missing Connecticut girl named Esther Albright. Esther looks just like Leena, and Leena steals her identity. She concocts a story to authorities that she was trafficked to Russia. In a lucky turn of events, Esther’s parents Tricia (Julia Stiles) and Allen (Rossif Sutherland) are super wealthy and bring who they think is their daughter back to the US — in a private jet no less.

From the first moments of Tricia reuniting with her 4-years-missing daughter, something feels off. The sensation worsens when Esther’s brother Gunnar (Matthew Finlan) keeps side-eyeing her with glances that suggest he already knows she’s an imposter. Anyone who has watched enough Law and Order can guess what’s coming next. The real Esther was killed in an accident by her roughhousing brother, and her mother helped cover up the crime.

It’s here that First Kill reveals that the meaning of its title actually refers to Gunnar’s killing of his sister. It’s also here that the plot goes off the rails in some outrageous ways that would be at home in one of those made-for-TV murder mysteries of the 80s and 90s. The over-the-topness of these plot developments has some weird but grotesquely fun slasher-movie moments. Julia Stiles seems to be having a blast in this role as doublecrossing Tricia. Her scenes with Fuhrman take on a noir quality as these two incredibly talented actresses work off each other with some pretty rad chemistry. There are moments where First Kill almost has telenovela-esque shades of Paul Feig’s cult melodrama A Simple Favor, and those interactions between Stiles and Fuhrman are weird, wrong, and yet somehow darkly delightful. The Orphan cinematic universe is a strange one.

But some disturbing narrative themes detract from the campy slasher fun that this film could have been. The original Orphan came under fire from adoptive parents for its portrayal of a demonic adopted child. The Daily Beast noted: “The movie Orphan comes directly from this unexamined place in popular culture. Esther’s shadowy past includes Eastern Europe; she appears normal and sweet but quickly turns violent and cruel, especially toward her mother. These are clichés. This is the baggage with which we saddle abandoned, orphaned, or disabled children are given a fresh start at family life.”

Unfortunately, this dynamic has only worsened with Orphan: First Kill and much of it is because we already know Leena/Esther’s secret. Her hypopituitarism has not caused her psychopathy and mass murdering tendencies. Yet, in First Kill, her appearance and disability are continuously linked to her evil deeds, as if being different automatically makes you a killer. The number of times other characters call her “freak,” “deformed,” “mutant,” and worse cement the connection between her appearance as a disabled person and her sociopathic behavior. This is ableism pure and simple, and it’s a really cheap way to have expanded on Leena/Esther’s story without offering anything else about her background or personality development.

There is also an undercurrent of xenophobia in First Kill that wasn’t at all present in the original, adding to the ableism of the story in associating a foreign woman with monstrousness. Tricia, at one point, says, “This family came over on the f*cking Mayflower and built this country,” when defending her actions in covering up her daughter’s death. Later, her son Gunnar calls Leena an “illegal immigrant dwarf freak,” and follows it up with the jaw-dropping statement: “I’m an American. People care what happens to me.” Okay, colonizer. Go off.

Because First Kill is a prequel, we know that the Albright family all die in a housefire that leaves Esther to be adopted by the Colemans in Orphan. By the end of First Kill, the only family member we feel sad to see die is tenderhearted artist Allen. Tricia and Gunnar proved themselves to be depraved in their own unoriginal ways underneath all their fancy clothes and behind the walls of their enormous mansion. They become stock villains themselves when adding their xenophobia into the mix, and it’s a strange twist that packs none of the punches of the original film’s surprises.

For hardcore fans of the original Orphan, First Kill’s major tone shift from serious to campy might be more than just jarring, it might feel even exploitative and borderline offensive when taking the ableism into account. Where Collet-Serra took on the story’s themes thoughtfully and compassionately, First Kill director William Brent Bell has done the exact opposite. However, depending on your perspective, Bell’s version might be a fun horror romp that doesn’t require a whole lot of discernment, just a silly, gory, slasher movie at home in a spooky season watchathon.

Still, Orphan: First Kill was an opportunity to develop more insight into Esther/Leena’s psychology and history: the hows and whys of how a monster was created by circumstance and economics — like Lifetime did with a similarly difficult character Grandmother Olivia in Flowers in the Attic: The Origins. I’m still hungry for a proper origin story about Leena. Unfortunately, though, the three-dimensional Esther of Orphan has been reduced to a stick-figure sketch in First Kill. It’s a shame to see such an iconic horror character diminished so thoroughly into a parody of herself, especially when there was built-in space for so much more. There’s definitely an audience of horror fans for Orphan: First Kill. But if you were hoping for a prequel that matched the mood of the original and deepens the storytelling, First Kill isn’t for you.

Orphan: First Kill is streaming on Paramount+ starting from August 19, 2022.