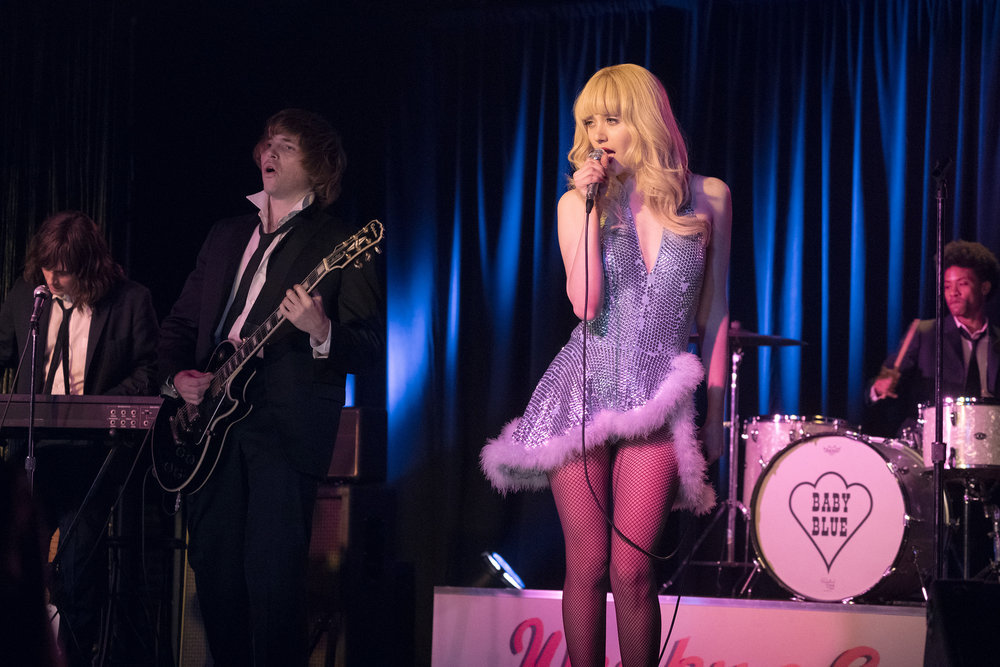 A divine creature from outer space, an ’80s billboard diva, a glow-in-the-dark queen of the universe — there are endless ways to describe L.A. legend, Angelyne. Peacock’s five-episode series, Angelyne, is loosely based on a 2017 investigative expose by Gary Baum for The Hollywood Reporter, “The Mystery of L.A. Billboard Diva Angelyne’s Real Identity Is Finally Solved.” However, this is anything but a straightforward biopic because Angelyne isn’t a straightforward being. From showrunner Allison Miller (Brave New World), Angelyne explores fame, fantasy, female empowerment, and so much more.

Since 1978, Los Angeles has been blessed with the infectious presence of the one and only Angelyne, the musician, actress, model, business, and all-around icon. Starring and executive produced by Emmy Rossum (Shameless), the series follows the rising star as she makes her way into Hollywood. She begins with the band Baby Blue and then strikes out on her own. What really launched her image were the hundreds of billboards she put up around Hollywood. They were simple; just a massive image of herself and a phone number for management.

In its five episodes, Angelyne spans about 60 years, from her traumatic childhood in the San Fernando Valley to the L.A. icon she is today. Over the years, she forged a new identity as the mysterious sex goddess looming over Los Angeles, distancing herself from her past. The inspirational rebel has a slew of mantras and became known for cruising around the city in her pink Corvette. Part of her lasting intrigue is the uncertainty of her origins. Though the 2017 piece from THR revealed her true identity, she remains an enigma. Angelyne repeats to herself in the series, “I’m not a woman. I’m an icon.”

Throughout her life, Angelyne has come across some colorful characters. Each episode centers around the many contradictory stories about encounters and relationships with her, starting with ex-boyfriend/former band member Cory Hunt (Philip Ettinger). Hunt, and every other character, fluctuate between reminiscing about what drew them to her vibrant personality and angrily recounting how and when the relationship went sour. This is intercut with Angelyne’s nonchalant confirmations and dismissive denials of their stories, similar to the comedic back and forth documentary style of I, Tonya.

One of the many fantastic aspects of the series is its impressive cast of actors, who definitely have fun playing the wacky menagerie of people surrounding Angelyne. Her decades-long confidant who ran her fan club and just about everything else, Rick Krause, played by the incredible Hamish Linklater (Legion, Midnight Mass), is one of the most interesting characters. Martin Freeman’s (Black Panther, Sherlock) Harold Wallach is the printing company owner who helped with her first billboards.

We’re in a time when every other project features an actor who is completely unrecognizable after going through a total transformation. However, there’s no other way to describe Emmy Rossum’s transformative performance as the one-of-a-kind, Angelyne. It’s a look that required heavy prosthetics, big hair, tons of makeup, and a (likely) uncomfortable wardrobe. She may not look anything like her in real life but her portrayal of Angelyne, right down to the hand gestures and cadences, is incredible. The voice is a challenge as it encompasses a cartoonish, Betty Boop-esque, high-pitched, hyper-feminine tone.

Even more impressive is Rossum’s dedication to the project as a whole. She told THR, “There’s an immediacy to her story. She’s the original influencer. She was doing this before anybody. She knew the power of her image, which is why she had so much control over it.”

Angelyne has surreal and whimsical moments with flying cars, spaceships, and pinker than a Barbie dream house. Music is also a big part of Angelyne’s life. Composer Jonathan Sadoff (Ingrid Goes West) uses both punk and new wave to go along with the dreamy Hollywood aesthetic. She leads an extraterrestrial fairy-like existence, which is very much the overall style of the series.

Escapism is a significant theme in the series, especially since it’s set in the land of make-believe. Angelyne often dissociates from the world and slips into a fantasy, much like Harley Quinn’s post-slap “Diamonds Are a Girl’s Best Friend” sequence in Birds of Prey, which is fitting since series art director Jamie Hall also worked on that film. In the series, Angelyne expresses her desire for a painless existence like Barbie, which is heartbreaking and relatable for many.

Like Pam & Tommy, Angelyne looks at what it means to be famous, particularly as a woman. Angelyne fully embraces her sexuality and plays into the blonde bombshell role. Of course, that’s not enough for Hollywood. She’s mocked and belittled for her appearance, but still, people want more. Since she’s famous, every part of her belongs to the public, including her body and backstory. One scene shows her confidently turning down a very condescending Hugh Hefner, who, despite the clear understanding that she has no intention of taking off her clothes, thinks posing nude for Playboy will help “maximize her potential.” But for her, fame isn’t just notoriety and luxury — it’s the love of the world.

In 2017, Angelyne shared with L.A. Weekly: “And I hope to inspire people to become who they are to their maximum self, like pieces of artwork.”

You can compare her to today’s influencers or other “famous for being famous” personalities, but Angeline is wholly original, completely herself. Rossum and her masterful team of collaborators fully understood the assignment and created an immersive experience that is equal parts fun, tragic, magical, offbeat, and just as unique as its subject.

All five episodes of Angelyne premiere on May 19, 2022, on Peacock TV.