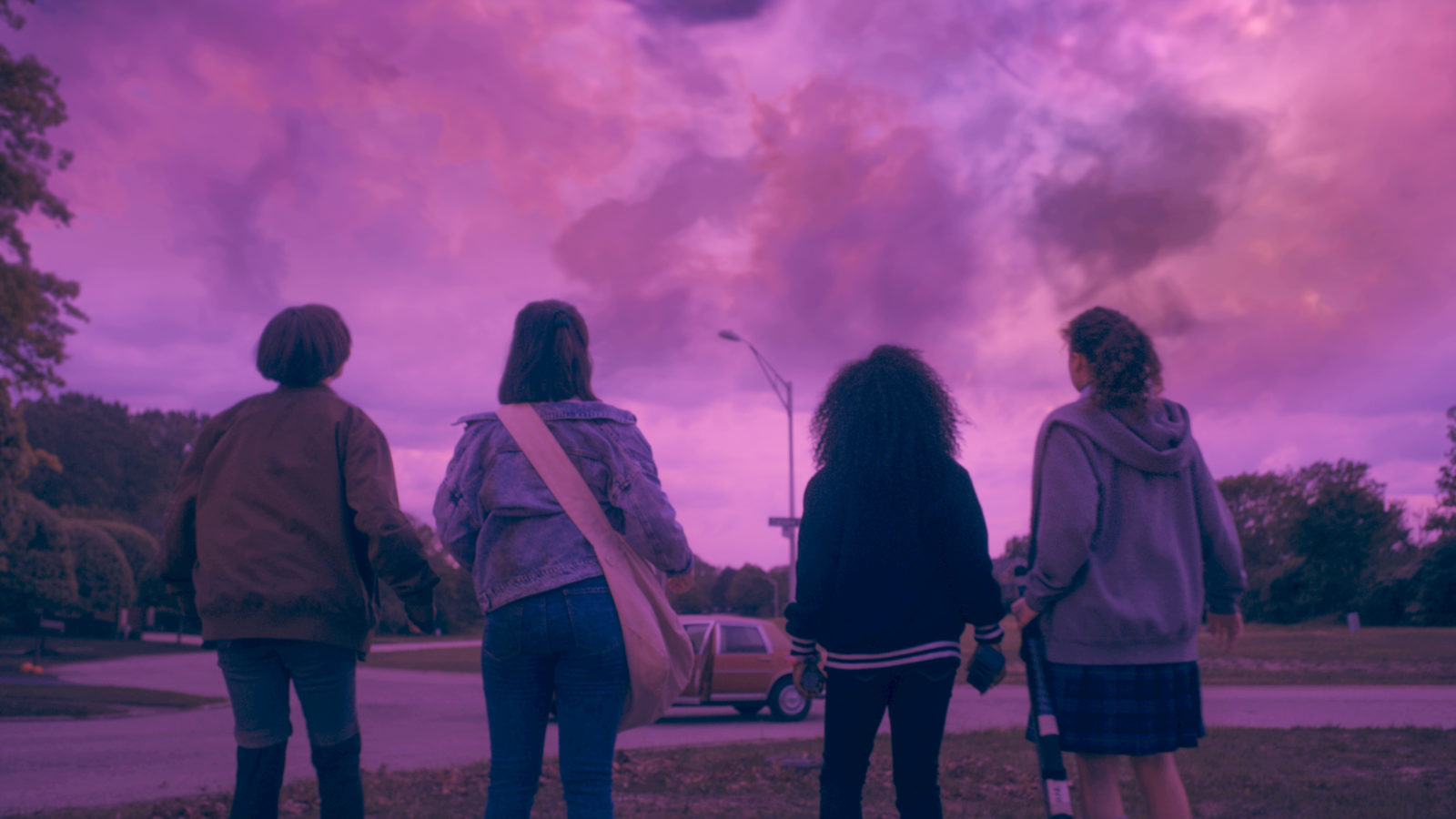 Based on the best-selling comic book of the same name written by Brian K. Vaughan and illustrated by Cliff Chiang, Prime Video’s latest sci-fi series Paper Girls follows, you guessed it, paper girls who start their day delivering newspapers and end up in a completely different time period.

The series, led by showrunner Christopher C. Rogers (Halt and Catch Fire), is set in the 1980s, so naturally, it’s already been compared to Stranger Things, but within the first few minutes, you’ll realize that other than kids on bikes encountering something supernatural, that’s where the similarities end.

Set in Cleveland, Ohio, the series begins in the early hours of November 1, 1988, aka Hell Day, as the titular paper girls prepare for their routes. We first meet Erin Tieng (Riley Lai Nelet), who has to assure her mother that she’ll be fine (spoiler: she won’t). But it’s a reasonable concern, because even in the 1980s, the idea of 12-year-olds delivering newspapers around town on bikes at five in the morning is questionable. Erin, who is called “New Girl” a lot of the time, meets veteran paper girls Tiffany “Tiff” Quilkin (Camryn Jones), Mac Coyle (Sofia Rosinsky), and KJ Brandman (Fina Strazza). They come across costumed teenage bullies, but the real obstacle is running from the suddenly stormy pink sky and stumbling into the year 2019.

The girls narrowly escape the laser gun wielding Old Watch soldiers, led by the futuristically dressed Prioress (Adina Porter). Little do they know they’re now in the middle of a time war between two factions, which makes returning home alive even more difficult. The disoriented young time travelers go to Erin’s house to regroup but instead of her mom and sister, they find adult Erin (Ali Wong). The two Erins have heart-to-hearts throughout the series, the youngest mostly feeling disappointed in her future self.

In their mind-boggling adventures, the girls meet Larry (Nate Corddry), a member of the Underground, the “good guys” side of the war. However, this war isn’t simply defined by right and wrong, or good and bad, so it gets messy.

Jason Mantzoukas has a mysterious role in the series. Fans of the comics might have an idea who he could be (but I’m not sure if it’s a spoiler for the show, so I’ll leave it at that). Adina Porter — a powerhouse from two of my all-time favorites, True Blood and American Horror Story — and Mantzoukas — cohost of the excellent How Did This Get Made podcast and voice my favorite Big Mouth character — in a show together is something I didn’t know I needed, but as it turns out, I did.

The heart of Paper Girls is the characters and the amazing young cast of leading ladies who embody them. There are four different personalities that don’t always mesh, leading to plenty of heated arguments. Each of them have their own personal issues they’re dealing with inside but they also share the typical feeling of being 12 years old.

Beginning the series with Erin allows us to connect with her right away, and Riley Lai Nelet makes that easy. Since we’re also new to this world of early morning paper delivery, we’re mostly in her point-of-view. We see some of the racism that Erin faces as a Chinese-American in what seems like a predominantly white town. Chiang told EW, “To be able to tell a story featuring an Asian-American character that’s not necessarily an immigrant story but a coming-of-age story … I kind of didn’t realize how much I needed it until I was drawing it.” He goes on to describe her “sweet nerdiness,” which is exactly how I would describe her. Erin is pretty quiet at first but becomes more assertive throughout each episode.

Tiff, the ultimate Black girl nerd, takes the lead when it comes to all the wild science and technology aspects of their sci-fi situation. What makes Tiff so lovable is that she’s displaying this high level of intelligence without being super serious all the time. The excitement she has for walkie talkies is equally hilarious and endearing. I won’t give too much away, but adult Tiff (Sekai Abeni) is just as cool and smart as hell.

KJ might be the most complex of the girls, because she’s very much in her head. However, she also shows kindness, impulsiveness, and strength just like her friends. It’s implied that she’s struggling with coming to terms with her queerness. Her time in the future gives her feelings of curiosity, confusion, fear, and a little clarity about her sexuality, all of which Fina Strazza conveys beautifully.

Mac is the loudest of the bunch, incredibly abrasive, and pretty much just angry at the world. These are all unpleasant traits but Sofia Rosinsky does a fantastic job showing Mac’s vulnerability underneath that tough exterior. With all this toughness comes a constant slew of curse words. Children cursing will never not be funny to me, so I greatly enjoyed it. But it also says a lot about the character. In an interview with BGN, Rosinsky said that as Mac is “letting her guard down a little bit more, she’s less reliant on the bad language.”

Paper Girls moves slower than one would expect for a show about kids and time travel but the slower pace accommodates the strong characters and their deep interactions with one another. Meeting your future or younger self gives you a lot to meditate about, and just wrapping your head around the whole time travel situation takes a while too.

The color palette of Paper Girls comics and TV series is simply gorgeous — truly the prettiest end of the world I’ve ever seen, almost like Color Out of Space. The series has a sort of indie film vibe. It’s a sci-fi mystery adventure, but it keeps the fantastical elements at a minimum in favor of more interpersonal moments.

As much as I love shows like Stranger Things, it’s nice to see something set in the ’80s that isn’t one nostalgia thing after another. At the Comic-Con 2022 panel, Strazza said, “We really made sure not to glorify it because the ’80s was not the best for a lot of people.” Honestly, other than Mac’s Walkman and Erin’s bangs, nothing about the series really screams 1980s. The music by Bobby Krlic, aka the Haxan Cloak (Midsommar), brings the synthy suspense but also encapsulates the fun, youthful moments amid the chaotic, tension-filled moments.

Paper Girls is a complex, character-driven time travel adventure with lots of heart, cool visuals, dope music, and incredibly talented cast. Fans of the source material will no doubt love the adaptation, and newcomers get to experience the beautiful, wild world for the first time.