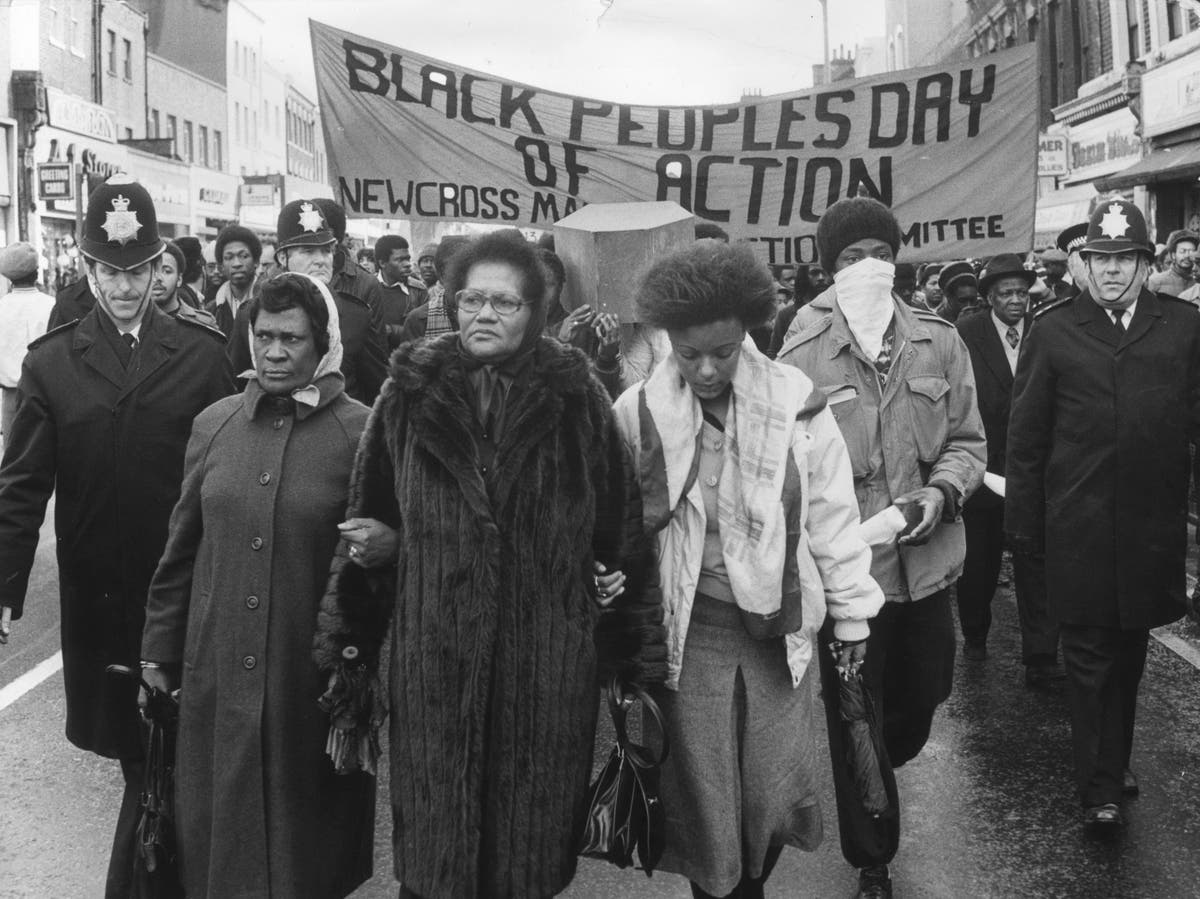 Amazon Prime Video’s Uprising is a compelling look at Britain’s violent history of racism and police brutality. Directed and produced by Steve McQueen (12 Years a Slave) and James Rogan (Stephen: The Murder That Changed a Nation), the three-part documentary series chronicles three life-changing events in 1981 — the New Cross House Fire, the Black People’s Day of Action march, and the Brixton riots.

On January 17, 1981, friends and family gathered at the home of Paul Ruddock on 439 New Cross Road to celebrate the birthdays of Yvonne Ruddock and Angela Jackson. The party commenced that Saturday night and lasted until 6 a.m. Sunday when a deadly fire broke out.

The first episode of Uprising, “Fire,” focuses on the rampant racism in 1970s Britain, and builds up to the events before and during the house fire. Archival news coverage highlights crime in Britain, referring to South London estates as “urban battlegrounds” and Black teens as “unemployed youngsters” mugging old white women. As councilor Russell Profitt says, this was “scapegoat politics.” The episode shows interviews with Black teens about the police harassment they faced on a daily basis.

In powerful, intimate interviews, the survivors’ faces light up as they remember the excitement leading up to the party, especially when talking about the Lover’s Rock music. Director of Photography Charlie Laing (Stephen: The Murder that Changed a Nation) uses close-ups to show their eyes as their smiles fade, revealing their complex emotions when thinking back to this tragedy.

As they go through the series of events, we hear sounds of exploding glass and crackling flames erupt over Wailing Souls’ “Kingdom Rise Kingdom Fall,” the last song Wayne remembers hearing that night. All background noise stops when they begin describing the chaotic moments after the fire broke — the intense heat, thick smoke, and darkness. Survivors recount the horrific experience of fighting their way out of the flames, scrambling to jump out of windows, and witnessing their friends scream in fear during the final moments of their lives.

The second episode, “Blame,” picks up the morning after the fire, detailing the immediate aftermath of the tragedy. It was believed (and still is today) that the fire was caused by racially motivated arson, considering the several firebombings of Black establishments in that area.

The inefficient police investigation angered the British Black community. The series interviews police and forensic investigators about the tactics used to determine the cause of the fire. Detective Sergeant Jackie Malton is defensive but admits to some failings on their end. Their theory that the fire started inside is widely detested by the survivors, families, and community as a whole.

Many of the survivors have permanent physical damage; all have lasting effects of trauma. Wayne talks about the agonizing physical therapy he endured in the hospital after his right leg and hip were shattered. Though unable to walk or leave the hospital, he wished he could have attended the revolutionary mass demonstration.

The New Cross Massacre Action Committee (NCMAC) organized the Black People’s Day of Action march, which commenced on March 2 of that year, drawing roughly 20,000 people. This was intended to disrupt London’s workday, forcing everyone to pay attention. Media coverage of the Royal family is juxtaposed with the fire, showing where the attention was at the time.

The third episode, “The Front Line,” delves into the increase in police presence and brutality and how it led to the Brixton Riots. Angered by the police’s launch of Operation Swamp, hundreds of Black teenagers fought back, which the police were wholly unprepared for. George Rhoden, a young Black officer at the time, felt conflicted during the riots. He was attacked and called a Judas for betraying his people.

Uprising thoroughly chronicles the before, during, and after of the New Cross Fire. Having this as a series allows time to fully understand the impact of this tragedy and the following events in 1981. The series explores the collective trauma among the survivors and offers a look into the Black experience in Britain, something scarcely represented. It’s a must-watch for anyone unfamiliar with Black history in the UK.

Uprising premiered on BBC One on July 20. The docuseries debuts on Amazon Prime Video on September 17.