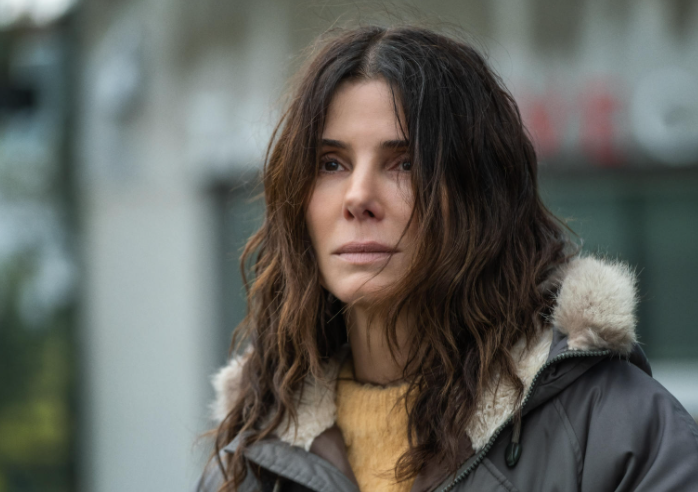 The Unforgivable, the second feature from German director Nora Fingscheidt, is a heartbreaking family drama wrapped in a frustrating package of white fragility, shockingly bad decisions, and miscommunication trope. Starring Sandra Bullock with appearances by Jon Bernthal, Viola Davis, and Vincent D’Onofrio, this is a questionable script expertly acted by some of Hollywood’s best.

Ruth Slater (Bullock) has spent 20 years in prison for the murder of local sheriff, Mac Whelan (W. Earl Brown). She gets out and tries to connect with her little sister Katherine “Katie” Malcolm (Aisling Franciosi), who was only 5 when the incident occurred and ended up in the foster care system. Katie is adopted by the Malcolm family and is a talented pianist. The only glimpses of the past she receives are in debilitating flashbacks to the fateful day when her family was torn apart.

Ruth gets out of prison and moves into a halfway house where she shares a room with three other women. Under the guidance of her unnecessarily cantankerous parole officer, Vincent Cross (Rob Morgan), Ruth finds a job and begins to get her life together. But she can’t leave the past behind as she tries to locate her future.

Despite Ruth’s best efforts (and 20 years in prison), Sheriff Whelan’s family, Steve (Will Pullen) and Keith (Tom Guiry), see Ruth’s release for good behavior as an insult. They decide to take the law into their own hands and deliver to Ruth the justice they believe she deserves.

On the surface, the title, The Unforgivable, seems to apply to Ruth. Throughout the film she’s guilty, period, end of story. She’s a cop killer and doesn’t deserve basic human rights or access to her family. This is a premise that is taken universally as fact throughout the film, and it’s one of the things that makes it wholly frustrating.

There’s a popular drama in which a couple is revealing their murderous secrets to one another. An eavesdropper has scaled their house to peek in and, upon discovering the secret, startles and falls to her death. The wife tells her husband they must hide and dispose of the body because if they say she simply fell, the police ask why she was snooping in the first place and they’ll have to tell them.

It’s one thing to be caught between a rock and a hard place, and yet another to own leases for both. The Unforgivable is full of solutions and no justification for why they are never pursued. Below the surface, The Unforgivable can refer to a lot of things, and the film rides a line between intentionally vague and coincidentally poignant.

Ruth and Katie are the main family, but they are only one of many. Outside of Jon Bernthal’s character (Blake) and Victor, the rest of the main characters are mostly paired up. Michael and Rachel Malcolm (Richard Thomas and Linda Emond respectively) are Katherine’s adoptive parents. They are equal parts loving and withholding with Katherine and their biological daughter Emily (Emma Nelson). Then we have Liz and John Ingram (Davis and D’Onofrio respectively), who have two teen sons and are living in Ruth’s old house, the one that her desperate hold of upended her entire life. John is a lawyer who specializes in corporate law but agrees to help Ruth with contacting Katie. Finally, we have the Whelan brothers and Steve’s wife and daughter.

Each family presents a unique perspective on Ruth’s situation. The Malcolms believe Ruth is dangerous, and John Ingram is sympathetic to Ruth’s plight and helps her meet Katie’s foster family. Liz on the other hand is angry that Ruth was dishonest about her background. She makes a very important comment that had it been either two of their Black sons who shot a cop, they would be dead. It’s a no-nonsense statement that Davis delivers beautifully. The Ingrams and the Malcolms are not villainous people, but something about protecting their home, their children, and family seem to turn off the empathetic part of their brains that makes them see Ruth is only trying to do the same.

It’s very hard to reconcile the way Ruth is treated. There’s a delicious irony to the idea of breaking the law in order to avenge a law enforcer. Whether it’s ethical or not, being shot at is an occupational hazard for the police. There’s a strange thread in the film that somehow this is not a fact, that a police officer should live until ripe old retirement age, and that anyone who dares to interfere with that plan is evil incarnate and not worthy of basic human rights.

Again, on the surface, this is not a wholly unreasonable take, but to hold this very rigid way of thinking without considering the circumstances of why the shooting happened in the first place is shortsighted and ultimately dangerous. The triumph of the film is showing this in subtle takes as we see Ruth trying to avoid succumbing to these obstacles.

The downfall of the film comes in expecting the audience to waive all the ways Ruth’s inaction and poor communication led directly to her being treated terribly. I wondered for a moment if Ruth accepting all of the vitriol thrown at her is a form of self-flagellation, but the truth of the matter is that it’s hard to root for someone who feels entitled to something but won’t explain why her actions don’t match her desires.

Ruth goes from just wanting to know if Katie is okay to insisting that she be able to see her and accusing the Malcolms of being deceptive. But all the while, she’s holding information inside that would at the very least give her more of a leg to stand on. While this may be a subconscious ploy for the audience to explore their own biases, it doesn’t serve the film as well as it should.

The cinematography of the film is beautiful, and the performances by all are grounded and well done. Sandra Bullock in drama mode is sometimes very hit or miss. She’s an exceptional actor, but there’s a difference between when she goes into drama mode naturally, like in A Time to Kill, and when it appears more forced and intentional, like Crash. She plays Ruth with a heady and frighteningly accurate mixture of stupidity and pride. She shows Ruth both as a gun-toting member of the Trump demographic and a woman scorned by the very system that was never going to protect her in the first place.

While there are many exceptional elements to the film, in my opinion, they are undone nearly two hours into this slow-paced film. I can’t say that I recommend it, though it’s not at its heart a bad film. If you’re in the mood for solid performances despite a shaky narrative, this may be a welcome entry.

The Unforgivable is currently airing on Netflix.