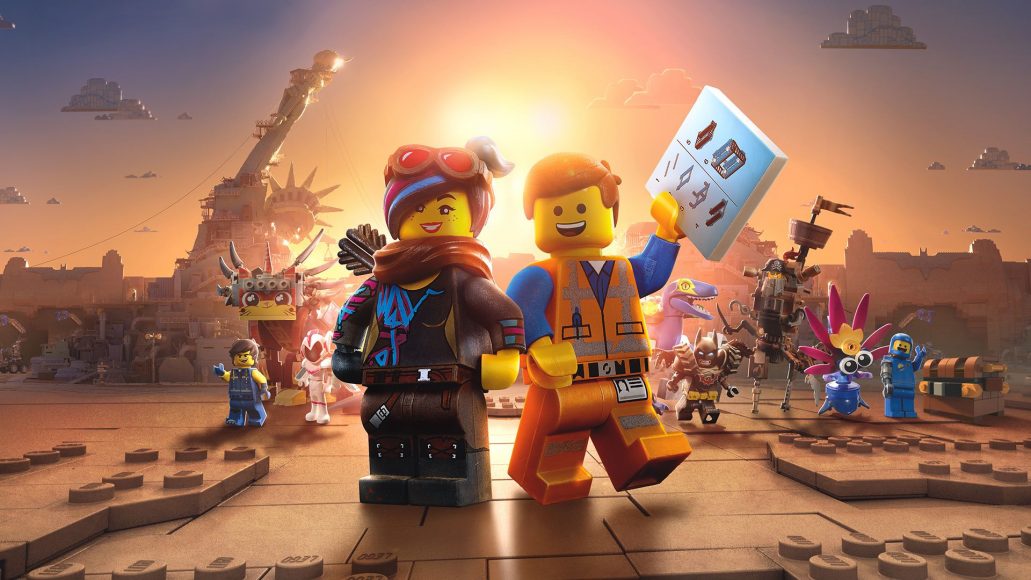 The Lego Movie, which followed the unforgettable everyman Emmet (Chris Pratt) on his epic quest to save his friends and his hometown of Bricksburg, had one of the most satisfying surprises in an animated film that I have seen! Justifiably, The Lego Movie 2: The Second Part had some very large shoes to fill and (dare I say it) it was awesome!

The Lego Movie 2 was an ambitious film to say the least. The film is extremely meta, and rather than getting overly compounded or loss within all the films realities, the filmmakers were able to simplify the story with a hilarious and beautiful execution.

The film opens up with a new threat from Finn’s younger sister, Bianca, and her DUPLO block creations. Right away, the film submerges us into the shared imaginations of Finn and Bianca through the Lego-verse. The thematic question the story explores is stated in its own unique and funny way, “can we play together? The animated debate between Finn and Bianca plays out in an intrinsic and imaginative way amongst the Lego characters. The divergence of the children’s ages and genders are clearly shown with the introduction of new lego characters, the language, the visuals, and more.

The film takes us through the setup of the story as we follow our hero, Emmet “the special/master builder.” He is happily living amongst his friends in Bricksburg when out of nowhere the DUPLO’s invade the town. The once vibrant and awesome town of Bricksburg is transformed into Apocalypseburg (the lego-verse version of a Mad Max dystopian town). The townspeople have all seemingly adapted into a survival, brooding like attitude akin to Emmet’s best friend, Lucy or better known as Wyldstyle (Elizabeth Banks). In the words of writer and producer Christopher Miller: “Everyone except for Emmet of course. He’s still the same gee-whiz, aww-shucks, naive guy he ever was.” Lucy voices her concerns to Emmet that he isn’t tough enough for their new harsh reality, where everything is not awesome. Out of fear of losing his friend, Emmet begins his existential journey of “growing up,” but after several meta twists and hilarious events, Lucy develops a bit of buyers remorse.

The set up of the film was in my opinion the least inventive of the story. It relied heavily on the same beats from the first film and played out a bit slow. However, the ambitious promise of the premise was extremely intriguing and with the introduction of the new character and much larger world in act two, the film ultimately exceeded all of my expectations.

After a twist in events that is (sort of, kind of, most definitely) Emmet’s fault, some of our favorite characters from the original Lego Movie, Lucy, Batman (Will Arnett), Unikitty (Alison Brie), MetalBeard (Nick Offerman), and Benny (Charlie Day) are kidnapped by a mysterious new character named General Mayham and put into her space mobile to bring to Queen Watevra Wa’Nabi (Tiffany Haddish). As expected, the master builder himself takes it upon himself to set out and rescue his friends. He quickly crosses paths with a drifter in space, Rex Dangervest who serves as Emmet’s guide to rescue his friends from the cleverly named galaxy of the Systar System. Now, if Bricksburg was vibrant, then the Systar System is absolutely vivacious!

Queen Watevra Wa’Nabi is a shape shifting queen with suspicious motivations who creates several hilarious moments, including one of my new favorite songs, “Not Evil.”  Tiffany Haddish’s talent and presence is so undeniable in this sequel. She changes into 40 distinctly different looks and not once was I ever not aware of her presence. She is simply brilliant.

Rex Dangervest is voiced by Chris Pratt. Rex is a galaxy defending archeologist, cowboy, and Raptor trainer. He helps Emmet travel to the Systar System to save his friends. Emmet develops a slight man crush on Rex, because he represent who Emmet believes Lucy wants him to be. Rex is absolutely hilarious and he comes with Raptors that are able to communicate and it is wildly entertaining!

After and Emmet and the crew feel like everything has been lost, The Lego Movie 2 : The Second Part asks another question: What do you do when everything is not awesome? The film provides a simple answer. Everything is not always going to be awesome, and that’s ok. I love that message not only for children, but with our current social and political climate, it feels like a relevant message that we are all in this together. The film ends on a high note that is very satisfying!

The Lego Movie 2: The Second Part was the most entertaining film that I have seen so far this year. It challenges the conflation that occurs often between perception versus perspective. It’s execution is entertainingly well done without diminishing from it’s emotional truth. Also, the music is better and catchier! There are several new songs that are equally hilarious as they are genius (especially the end credits song).