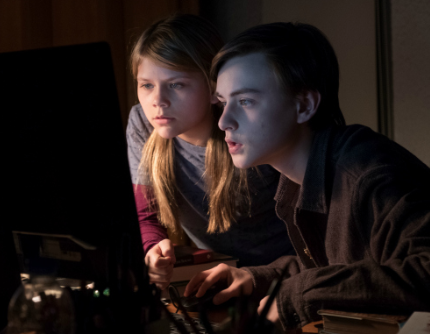 Doll-obsessed children and family dynamics that are far from the norm are at the center of the new horror movie, The Lodge.

The film comes from the production and distribution company Neon after being shared as an official selection in 2019 at the Sundance Film Festival, from writers and directors Veronika Franz and Severin Fiala, known for 2014’s Goodnight Mommy. The Lodge stars Riley Keough (Mad Max: Fury Road), Jaeden Martell (IT), Richard Armitage (The Hobbit), Lia McHugh, and Alicia Silverstone (Clueless). The twisted film is reminiscent of past iconic horror films like The Shining (1980), Hereditary (2018), and The Witch (2015), with twinges of Flowers in the Attic (1987) and The Crush (1993), ironically Alicia Silverstone’s debut film. There are clever moments throughout The Lodge. You don’t quite know where the film is going at times, but when it gets there it’s intense.

The Lodge follows a family who travels to their remote cabin in the mountains over the Christmas holiday after an arduous rest of the year. The father, Richard (Richard Armitage), is forced to leave the winter vacation for work. He leaves his children, Aiden (Jaeden Martell) and Mia (Lia McHugh), in the care of his new fiance, Grace (Riley Keough). The kids are no friend to Grace as they blame her for the separation and divorce between their mother, Laura (Alicia Silverstone), and their father. Not to mention, when Grace was 12, her father was the leader of a cult that ended with mass suicide. She was the sole survivor. Isolated and alone, a blizzard traps the three of them inside the lodge as terrifying events related to Grace’s dark past occur. This would be disturbing enough, but it’s accelerated to another level in the film. The Lodge truly keeps you on your toes. It keeps you intrigued all the way through. When the credits rise you will need to take a moment to catch your breath.

The acting in The Lodge is truly on point. Martell has proven to have great acting chops in IT and Knives Out. McHugh is fairly new to the scene but is making her mark as she expands from this horror film to Eternals, set to release later this year. Silverstone is barely recognizable in this film but proves she can still hold your attention on the screen, even with limited time. Keough as the troubled woman seeking love and approval from her boyfriend’s family is haunting. You can visually see she’s not all right. You can visually see how much she wants normalcy. There’s a way about her, performed so well, that you don’t know whether to feel sorry for her or be afraid of her.

The Lodge gives us a view of cults and faith that is beyond your stream of murders and things that go bump in the night. It truly is a lesson on how far people will go for their beliefs. The setting contributes to the film as well. The use of snow and cold play on the emotions, temperament, and actions of the characters. It’s like a blank canvas where anything can happen.

The structure, story, and idea are all brilliant. Yes, the film plays on notions we’ve seen before, but the overall accomplishment is truly memorable. A layer of dread slowly covers the entire film, much like the blanket of snow that covers the lodge, trapping its viewers inside. Visually, The Lodge is crafted with the audience in mind. It’s strikingly tense and paced almost to perfection, making every creak, every sigh, every dark corner necessary and spine chilling. Every scene is deliberate and thought out. The themes that run through the film, including grief, family, and mental health, are done with care. The characters are given time on screen to fully deliver on the emotions and instability that these themes cause. The level of uncomfortableness steadily rises, transitioning seamlessly between drama and horror.

The pace is truly my favorite part of this film. It spins a tale of absolute dread. It’s a steady flow of information and revelation. The rhythm and timing of the overall story work to its full potential. The use of dialogue and action is utilized in a smart way. Certain scenes do well with less dialogue while others use it wisely. Again, everything is done on purpose. The pace allows the audience to fully feel the weight of the emotions on screen as well. It’s a feeling of desperation and hopelessness amidst loss at an early age. The loss comes in all forms.

This film is a great addition to the horror genre. It creeps up on you. You will walk away scared but not for the reason you imagine. The Lodge is in theaters Friday, February 7.