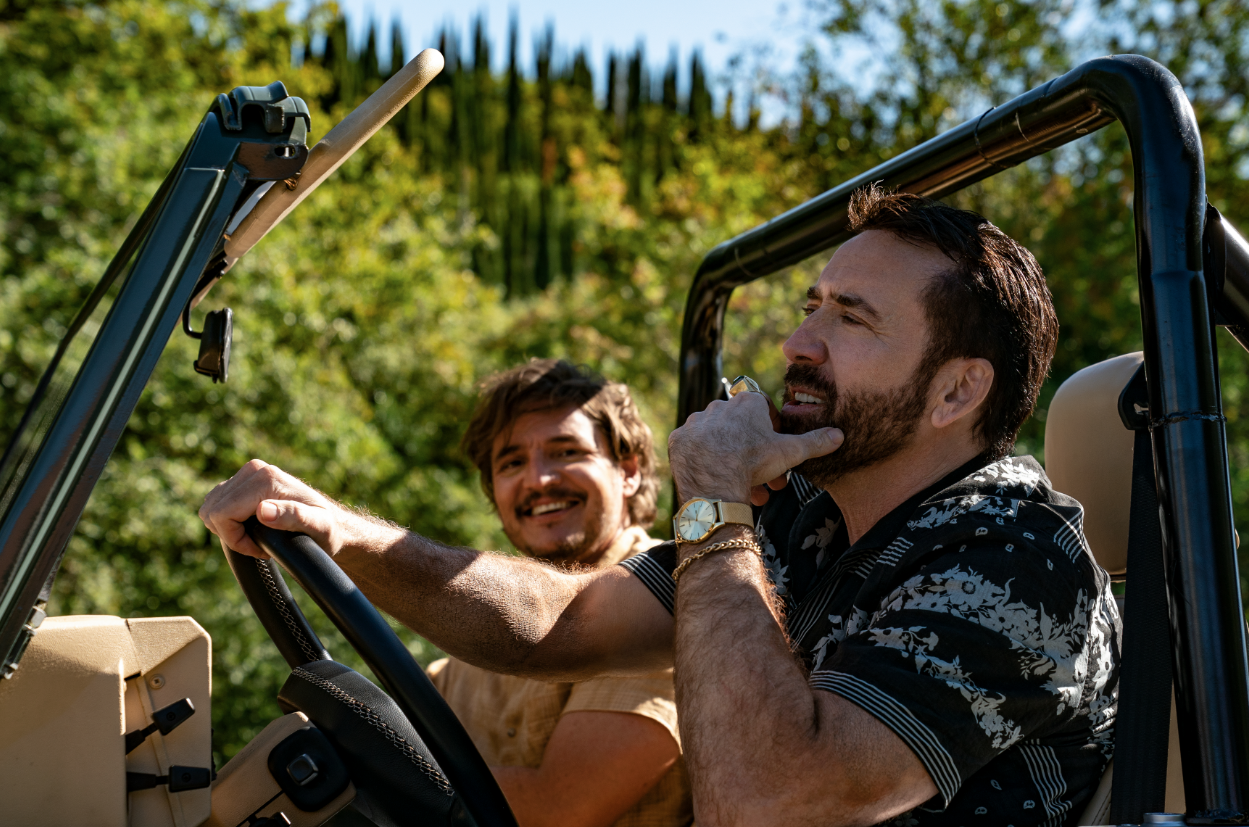 From Being John Malkovich to Steve Coogan in The Trip and literally anything starring Jeff Goldblum, presenting the mystery of one’s international appeal through self-referential comedy has produced several fantastic meta-adventures. The Unbearable Weight of Massive Talent is a love letter from Nicolas Cage to Nic Cage, and It’s a fascinating and utterly delightful ride.

Starring Nicolas Cage as himselves and Pedro Pascal as his number one fan, Massive Talent takes a look at the co-dependent relationship between fan and superstar. Pascal plays “Javi” a rich Spaniard who invites Nic to his birthday party in Mallorca. He offers a million dollars, which Nic takes after some career pratfalls (and some arguments with his alter ego, Nicky). Nic arrives and is instantly enamored with Javi (who wouldn’t be) before he learns the news that may change not only his entire perspective, but the trajectory of his life.

What makes projects like these successful is the ability to shed ego and be vulnerable. It’s one of the reasons Tom Cruise’s Les Grossman was such a beloved and surprising take. It ripped the veil of an aloof action star and showed someone aware and introspective.

It’s refreshing and serves as a reminder that no matter how high we hold these people, they are still just that, people. In the film, Cage mentions that he always thought of it as a “job.” He’s got bills to pay and mouths to feed. But we see that he’s clearly in it for more than the money. The validation is just as important, and he gets not just from a job well done but a job well received.

The movie serves as a film within a film. Javi has written a script that he wants Nic to read, and Nic uses the script as an opportunity to help the CIA take Javi down. Oh yeah, did I mention there’s an entire side plot involving the abduction of a rival president’s daughter (who is also a Nic Cage fan) and bringing down Javi’s alleged criminal empire?

With Ike Barinholtz and Tiffany Haddish playing CIA operatives, Nic finds himself in hot water. As he and Javi talk about the film they plan to make, we see said film play out in front of our very eyes. There are so many references to Cage’s past roles that if you had any fascination with Cage’s acting persona, you’ll be thrilled. If you have no idea who Cage even is and are just showing up for an action-comedy, you’ll still be thrilled.

While Cage is playing himself, writers Tom Gormican and Kevin Etten turned him into a slightly trumped-up version that makes him vapider and un-self-aware. It’s particularly effective when presented with the estranged relationship between Nic and his daughter Addie (Lily Sheen) and his ex-wife Gabriella (Alessandra Mastronardi).

He’s not evil or villainous. He’s simply a hot mess and needs to — as Gabriella tells him lovingly — get his sh*t together. Nic’s journey through the film comes with him realizing how his actions affect the lives of those around him, and how they extend past just acting”. It’s beautifully done and thoughtfully nuanced. And couched in between scenes where Javi and Nic trip acid and jump off cliffs.

The pacing of the film is pitch-perfect. At 1hr and 46mn, there are plenty of opportunities for the film to lag or lose the audience, but yet the film perseveres. There are quiet(er) moments to give you a break from the action, but they are still engaging and packed with inside jokes and meta-references. The location of Mallorca was splendid to see in all its glory and create a perfect backdrop that lived up to the drama of Nic Cage himself.

Now you’ll have to excuse me while I take an entire paragraph to gush over Pedro Pascal. Many know him from Narcos or The Mandalorian, but I knew him first as Prince Oberyn Martell from Game of Thrones. The Red Viper of Dorne skillfully sauntered his way into my heart. His sexuality was almost as fluid as his sword skills, and his thirst for passion and vengeance was enough to have you rooting for him instantly.

It’s easy to attribute these traits to the character and the writing, but sometimes, it’s the actor that makes the character. Pedro Pascal has eyes that can vacillate from calm warmth to fiery anger on a dime. But either way, there’s a passion that burns just behind his iris and you know that regardless of the emotion, it will be declared fully and without reserve.

There are ways the character serves as a representation of Gormican himself. He told Vanity Fair, “This guy’s a true original, an American oddball. He’s so weird in the best possible way.” It’s a realness that speaks to Javi and seems to validate a part of his spirit. Pascal — who is a huge Nic Cage fan himself — delivers this desire to matter beautifully.

It’s not over the top, it’s not slapstick, it’s just pure commiserate strangeness, and it works. The chemistry between Cage and Pascal is sure to go down in history as one of the best bromances along with icons like Corey and Shawn (Ben Savage and Rider Strong, Boy Meets World), JD and Turk (Zach Braff and Donald Faison, Scrubs) and Abed and Troy (Danny Pudi and Donald Glover, Community). They are delicious to watch and a true treat.

I can’t recommend this film enough. It’s so fun, and reverent to a man that his literally given himself over to his own spectacle and both he and we are better for it.

For more movie fun, check out our interviews with the cast. The Unbearable Weight of Massive Talent is currently playing in theaters.