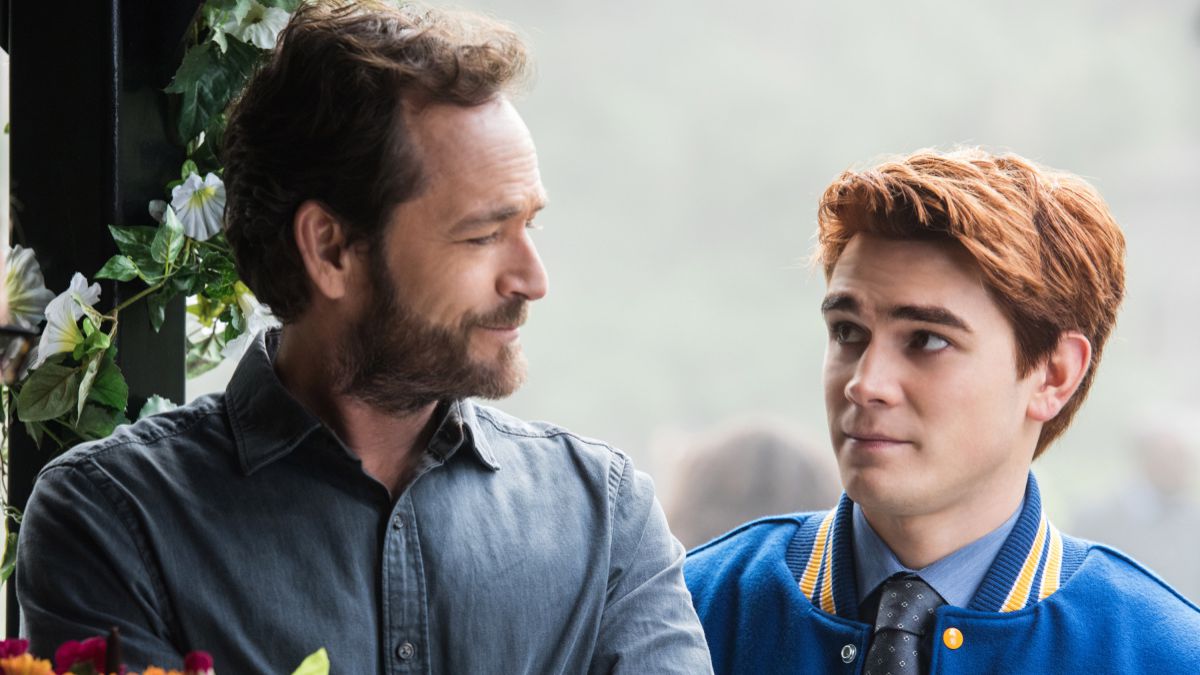 I probably shouldn’t have watched a Law & Order: SVU marathon before sitting down for this week’s episode of Riverdale. Where the Archie/Grundy storyline was already a special kind of painful, watching “The Last Picture Show” after seeing the Special Victims Unit arrest women like Geraldine Grundy makes it all the more ridiculous. And not in a good way. Since the show started, I’ve anticipated the moment Riverdale would finally cut the character loose. I had no idea it would come this soon, but I should have guessed it would be disappointing.

After taking every available opportunity to present Archie/Grundy as a sexy scandal/forbidden romance, Riverdale pretending it believes Grundy is a child predator would be dishonest, but it still doesn’t know how to navigate the waters it made murky by hooking Archie up with his teacher. Framing matters a great deal in stories, and Riverdale has made its stance clear from the jump. Imagine if the show hadn’t cast a 34-year-old Sarah Habel but an actress closer in age and appearance to the original Geraldine Grundy — it definitely wouldn’t try to pass off the relationship as anything remotely acceptable, but since Habel is hot (as we’re reminded again and again), this is what we get.

Even if we try to ignore the problematic elements of this coupling, Grundy simply turns Archie into a narrative wet mop. With “Last Picture Show” investing more fully in Grundy and Archie than previous episodes, there’s not a single respite. There’s no sign of the charming and lighthearted Archie of the previous episode, traded in for one an annoyingly tedious one who goes around town defending what he and Grundy “have” to anyone who suggests there’s something weird about a grown woman being into a fifteen year old.

It almost looks like things may pick up when Betty and Veronica uncover Grundy’s real name (Jennifer Gibson), a gun, and learn Grundy was once doing independent study with Jason Blossom. But if the conspicuous lack of the real Geraldine Grundy (whose photo appeared in the episode’s promo) indicates, there were plot points that landed on the cutting room floor, and we’re supposed to assume their relationship was innocent. If they were more than student and teacher, that would make it mostly impossible to pretend she wasn’t a sexual predator, and Riverdale waffles on affixing the label to her.

By making Alice Cooper the one to figure this whole thing out, Grundy’s conveniently cast as an innocent caught up in Alice’s vendetta against Archie. But it’s probably accidental that Riverdale proves the very point it’s been bending over backward not to make: Grundy wasn’t responsible enough not to sleep with an underage student, and now Archie bears the weight.

He spends the episode defending her and agrees with Alice that he’s stupid and selfish and unworthy of Betty’s friendship. When he resolves to end their relationship, it’s him ending it (after Betty tells him that maybe he should consider if this relationship is a good for Grundy) as if there’s not an adult in this scenario who should be, you know, adulting. It’s Archie crying in his dad’s car when all is said and done. Meanwhile, Grundy leaves town in her heart-shaped sunglasses, fake identity still intact, looking hardly broken up but a lot like she’s about to find a new teen boy to sleep with.

So what was the point of this? There’s no forward momentum on anything, (Riverdale couldn’t even bother to have Grundy contribute some new hint to why Jason might have been killed) so it’s all the more evident that the show was just desperate for something to up its scandal quotient. And that’s more than annoying, it’s harmful. I’m not a teenager, but there are some watching Riverdale, and the show has only furthered the already-too-prevalent notion that teenage boys should be proud of the sexual attention of adult women rather than freaked the f_ck out.

The only saving grace of this storyline is Betty. Her quickness to figure out Grundy and Archie’s connection saves us all a lot of time, and her dragging Veronica along to break into Grundy’s car is cute. She even demands Alice stop being so controlling (here’s hoping we don’t have to listen to any more diatribes). Riverdale clearly has a soft spot for its girl next door (one this reviewer definitely shares), one that ensures her more cohesive and more entertaining fare each week, but it’s becoming more glaring that the show doesn’t know how to do that for anyone else — including Veronica.

Despite Kevin’s opinion that Riverdale has been totally changed by Veronica’s appearance, it’s hard to see how. Veronica’s massive wealth (or lack thereof) hasn’t been a focal point so much as way, way in the backdrop. Whatever glamor she’s brought with her to town is invisible to us, as she fits in perfectly. Unlike her comic book counterpart, who can’t fathom how anyone survives without piles of money, this Veronica hasn’t blinked an eye at her diminished financial status. When Hermione lists all the privileges the Lodges once had, ones they could possibly reclaim by assisting in Hiram’s jailbird business dealings, it feels hollow because we’ve seen little evidence of the Lodges’ struggle, despite Hermione’s meager wages as a waitress. Her shady deal with Riverdale’s local gang, the Southside Serpents, is boring and only made significant by a revelation about Jughead.

But you have to wait until the end of the episode to get to it. So in the meantime, we’re treated to Jughead’s humdrum efforts at saving at the Twilight Drive-In, which no one (not us, not anyone in town) cares about. It’s all very tedious except a couple mentions of Jughead’s family: a dad who stole from Fred’s construction sites and a sister named Jellybean. This is also mostly meaningless (though, where is Jellybean?) until we realize Jughead’s been living at the drive-in, presumably a step-up from living with his Southside Serpent father. It makes no sense that no one in a town as small as Riverdale knows Jughead’s homeless, but since it’s just about the only thing in this episode making me eager for the next one, I’m rolling with it.