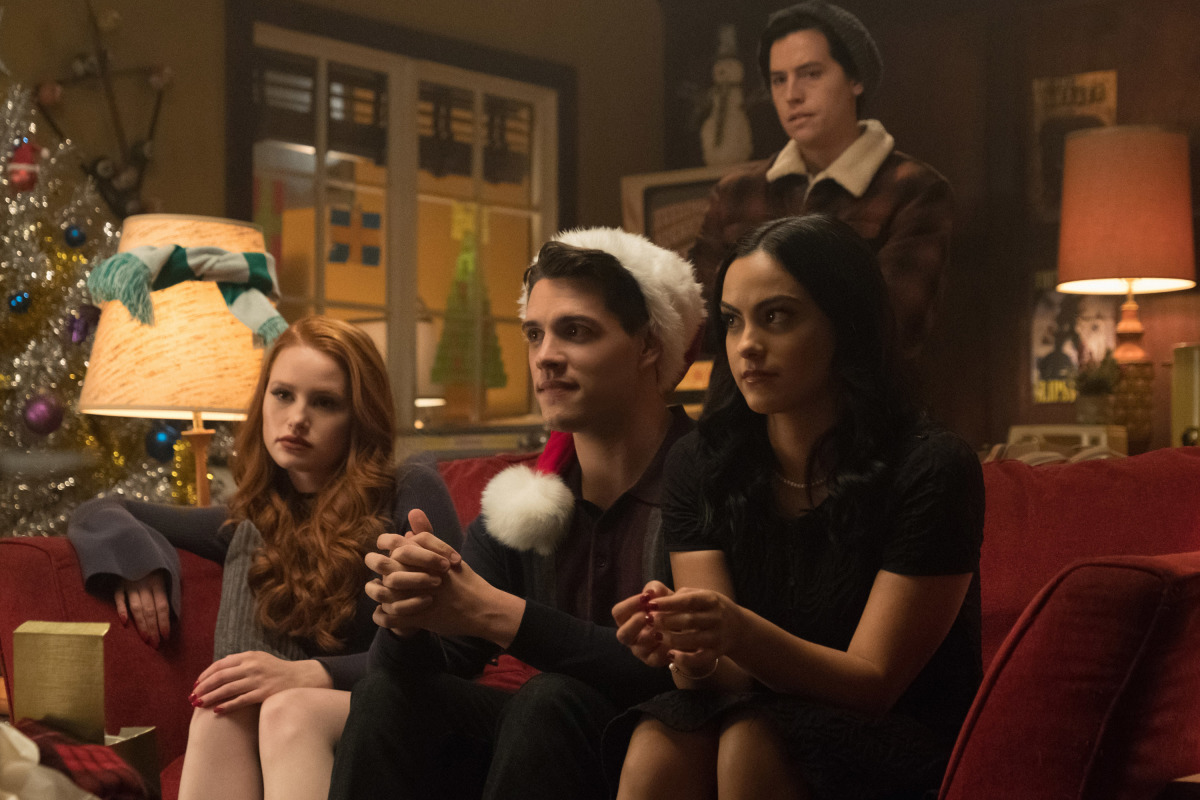 I’m still not convinced Riverdale actually has seasons (more like perpetual winter if you ask me), but apparently, it’s winter — and also Christmas time — in the tiny, mostly-grayscale town. I wish “Silent Night” had leaned in a bit more into the Christmas festivities, but it does a fairly good job at imbuing the Christmas spirit with a resounding dread. (I’m actually very surprised we weren’t treated to a Christmas Carol-esque episode but there’s always next year!) Besides the Black Hood’s lingering presence, no one’s having very happy holidays. Fred has a fat hospital bill he can’t pay, FP’s return to the Serpents has Jughead riddled with anxiety, and everyone’s broken up.

Betty and Jughead and Archie and Veronica are still pretending to be friends with each other. They are, of course, but both are still in their uncertain post-breakup phases, awkwardly exchanging Christmas gifts and trying to straddle the line between supportive friends and supportive love interests. These breakups still feel meaningless, but this is at least a break from the monotony of two established couples pairing up all the time. Betty and Archie’s friendship has been on the backburner this season so it’s a nice change to see them hanging out again, teaming up to find the Creepy Janitor, who’s been kidnapped by the Black Hood after his confession to Archie and Veronica.

I love Archie and Betty as co-investigators (please, please let Jughead and Veronica do some sleuthing together too!), but I’m a little bitter that it’s only because they’ll soon become some iteration of BettyandArchie that it’s happening. And I’m a lot bitter that what forced Archie and Betty into a liplock was angsting over Betty’s uber-annoying, long-dead grandfather (last heard being somehow involved into last season’s incest) who we learn took part in the execution of the innocent man Creepy Janitor claimed murdered his family. I’m so ready to get into the complexities of a love quadrangle, especially among a group of teenagers who are painfully polite to one another and almost-always super respectful of their friendships. But this is how they kick it off. Really? With Grandpappy Cooper?

I’m sure Veronica and Jughead will be devastated, but they could also just be too wrapped up in their own dramas to care. Or, and this is more likely, they’ll both start to wilt beneath the weight of their respective messes. There’s Veronica, finally wringing the whole truth from her parents (we don’t get to hear it, of course) and allying herself with them (but only if they pay off Fred’s hospital bills), and there’s Jughead, ejecting Penny from Riverdale to save his dad and the Serpents. Veronica’s new partnership with her parents will definitely go poorly, and Penny will definitely cross that county line back into Riverdale soon. I’m sure both will have perfectly mature reactions to their former significant others having a thing with each other. That will be fine.

It will surely be better than Betty being held at gunpoint and forced to bury Archie alive. And it’ll definitely be better than Archie having to be buried alive. And probably better than shooting and killing a man. For a moment, I thought Riverdale might leave us on a cliffhanger, with Archie in the coffin and Betty spirited away by the Black Hood. In retrospect, I might have preferred it to the underwhelming reveal of the Black Hood’s identity.

I hope Riverdale doesn’t think this is an at-all satisfying conclusion to the Black Hood mystery. There’s no way. Right? I’m inclined to believe it’s a fake-out because 1) we only met Creepy a few episodes ago so 2) no one cares and 3) this will have no lasting impact on anyone in Riverdale. Hell, the Black Hood’s barely having an effect as it is! Besides, there’s way more narrative meat to Archie having killed an innocent man, one perhaps forced to do the Black Hood’s bidding by the actual Black Hood.

Of course, Riverdale’s mysteries are not its most winning trait, but let’s be optimistic: it’s the holidays after all.

Riverdale will be back on January 17. See you back here then.