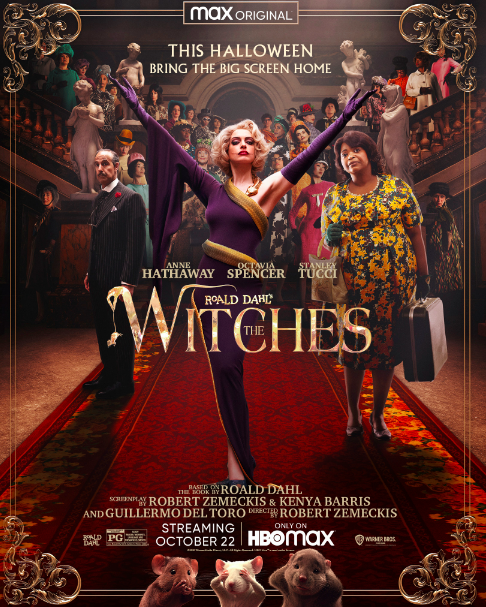 The 1990 film The Witches, based on the Roald Dahl book of the same name is a classic and a fan favorite.

Oscar-winning filmmaker Robert Zemeckis has re-imagined the children’s story in the form of a wickedly funny and heartwarming tale about a young boy who stumbles upon a secret coven of witches. With the help of his loving grandmother, he must try to stop their evil plan to turn all the world’s children into mice. Roald Dahl’s The Witches is the film the whole family can enjoy together this Halloween season.

Here are some first look photos below:

The incredible cast includes powerhouse performances by Anne Hathaway as the sly, menacing Grand High Witch and Octavia Spencer as the tough but loving grandmother who will fight her to the end. Stanley Tucci is the hotel manager unwittingly hosting the witches’ convention; Kristin Chenoweth lends her familiar voice and energy to the action; and the heart of the film is the young boy, played by Jahzir Bruno [adult narration by Chris Rock], who becomes a brave but unlikely hero by teaming with his friends and grandma to stop the witches’ evil plan.

Director/producer/co-writer Robert Zemeckis is joined by a world-class team of filmmakers, including Alfonso Cuaron, Guillermo del Toro, and Kenya Barris.

Roald Dahl’s The Witches will be flying into your homes and premiering exclusively on HBO Max on October 22.