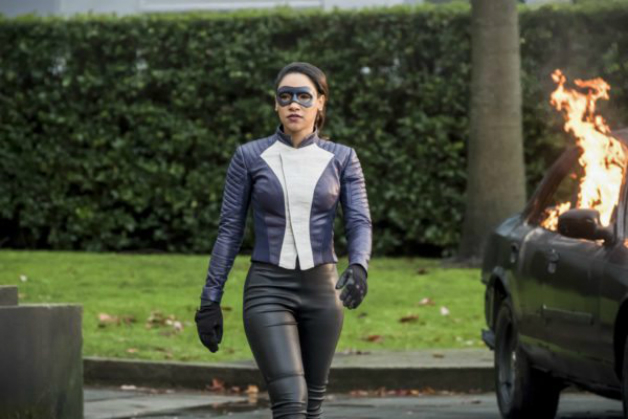 The Flash swapped meta-human powers in probably the best episode of the season with Iris West-Allen inheriting Barry’s speedster powers. With Barry powerless back at Star Labs taking on the role that Iris usually fills as team leader, the change in dynamic was great! I mean, how can you be mad about Iris speeding around Central City saving citizens from burning buildings and taking out villains with speedster tidal waves? You just can’t!

Iris was so badass this episode. Not only did she have to adapt to her new meta-human skills, she dealt with Human Resources issues (Ralph Dibny losing all hope and kind of being a jerk), and learned to believe in herself. Additionally, you can tell throughout the episode that Candice Patton enjoyed the change of pace, and as always, she exceled when given the chance to expand her character’s narrative. Here are some highlights from season’s 16th episode, “Run, Iris, Run!”

The beginning of Iris’ speedster journey takes place in a bank, during a robbery. A meta-human with the ability to blast solar plasma from his hands terrorizes bankers as he melts a hole in the bank’s safe. A man in a dark hoodie confronts the meta-human, informing him that using his power to commit crimes is wrong. A scuffle ensures and after some skin to skin contact with the robber, the man in the hoodie, who is later identified as EMT Matthew Kim, absorbs the robber’s powers and passes them on to one of the bank hostages. This decisions was a life saving one, as seconds later, the robber attempts to blast Kim with his solar plasma energy, only to find that he no longer has them. When the police arrive to apprehend the robber, Kim mysteriously disappears.

Back at Star Labs, Team Flash reviews the bank robber case curious as to why the robber lost his meta-human abilities. As they mull over the mystery, a sulking Ralph Dibny refuses to help the team 1), figure out the mystery, and 2), find the last few bus metas. After a brief confrontation with Iris, Dibny accuses her of never being in real danger because she commands Team Flash from the safety of Star Labs. He’s so wrong though. Iris has faced more than her share of danger, I mean, hasn’t Team Flash informed Dibny about this terrorizing fool?

Anyway, Iris, though she has proven that she is a confident and fearless woman time and time again, starts to doubt herself. With Dibny’s grumbling still fresh in her mind, Iris jumps at the chance to go into the “field” as they investigate the bank robber meta mystery. She joins her father in the investigation and they track down Kim who takes Iris hostage. Barry speeds to her rescue, and bam, his powers are transferred to a surprised and vibrating Iris. Yes!

The Introduction of Speedster Iris

With her DNA changed to that of a speedster, Iris immediately starts her speedster training. With Barry out of commission, Central City still needs protection. So, Team Flash focuses on tracking down Kim and getting Iris up to superhero speed. Some of the old fun Barry training scenes were replicated in these portions of the episode, with Iris defeated by the Star Labs treadmill, and her loving the famous Star Labs speedster laps. Everyone seems impressed by Iris’ new abilities, and Cisco, when he wasn’t fighting with Harry about his harebrained idea to replicate DeVoe’s thinking cap technology, totally approves of speedster Iris. I mean, is this the most approving look or what?

Barry, on the other hand, is less than thrilled by the loss of his powers, and on occasion, he sulks because of its absence. Barry is also worried that Iris won’t have enough training before the next catastrophe hits Central City, or that DeVoe will make an untimely appearance. Iris, on the other hand, appears comfortable with her new meta-human abilities. It’s not long before she puts her knowledge of the Speed Force to use when a burning apartment building pops up on Star Lab’s monitoring system and Iris uses her speedster skills to rush everyone from the building.

After successfully putting out the building fire with some of her speedster tricks, Iris is confronted with the meta-human created by Kim at the beginning of the episode (solar plasma dude’s powers). The newly minted meta-human threatens Central City with his solar energy plasma and fire hurricanes, proving difficult to apprehend. However, with the help of Team Flash, Iris ends up creating a tsunami wave and essentially puts out the villainous meta-human like an old campfire.

The episode ends with Iris convincing Kim to swap her speedster power back to a relieved Barry and join Team Flash. Kim obliges, and after apologizing to Iris, Dibny has a new outlook on facing his future. The only bad thing about “Run, Iris, Run” was the fact that Iris is no longer a speedster by the end of it. Boo! I need more!