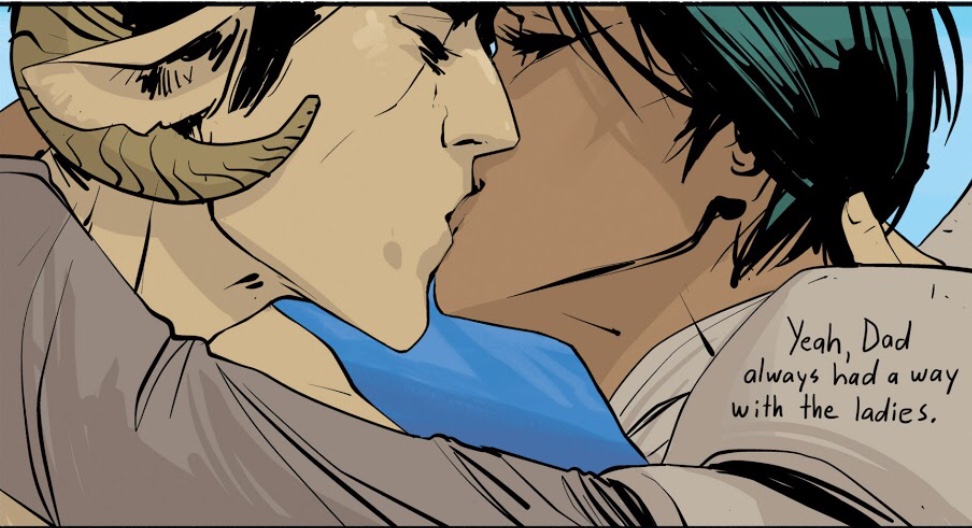 Saga, an ongoing intergalactic comic series, tells the story of interracial couple Alana and Marko as they run for their lives in their vast galaxy. The lovers are from two different planets — Landfall and its moon, Wreath — that have been at war for years. They each belong to a different species. A different culture. A different way of life. In their worlds, consorting with an enemy is punishable by death.

It’s rare to see in an interracial couple of color in a comic series but, for me, their relationship dynamic hits home. I’m in an interracial relationship and in some moments it can be difficult for us to connect and understand one another. What I really like about the coupling is that despite their racial differences, they’ve found a way to respect and honor one another even during this terrifying time of their lives.

Gettin’ my swirl on

What would my family say? Would they approve of my non-Black lover? Would I be comfortable talking about issues that plague the Black community with him? Would he care about these issues as much as I do? More importantly, though, would he understand them?

Being the stubborn woman that I am, I decided to assume that the answers to these questions would be:

No. Meh. Nope. Probably not and fuck no.

I decided that I wouldn’t speak about anything related to the Black experience, Black culture, Black issues, my experiences with racism, my intense admiration of Black love and Black beauty with my new beau. I felt it would make feel too vulnerable, too accessible, and too much like myself. Maybe it sounds strange because when you enter into a relationship one should try to be as authentic as possible, but in my mind at the time, I favored retaining my deepest thoughts and feelings over being completely open. I chose to think if he was “the one,” then I’d hopefully reach a point in our relationship where I felt like he deserved or earned the right to meet my authentic self and fully unpack the many layers of my psyche.

Another why I refused to speak on racism at the start of our budding relationship was because it makes me really emotional. I mean, how could I not be emotional when I hear of stories of my people being killed, slaughtered, and tortured every day? I remember when I learned of Philando Castille’s killing; I broke down and cried. It angered me and deeply saddened me at the same time.It wasn’t until the day of Castille’s brutal murder, that I realized why I needed to share my feelings regarding police brutality with my boyfriend, Carlos, a Cuban man. 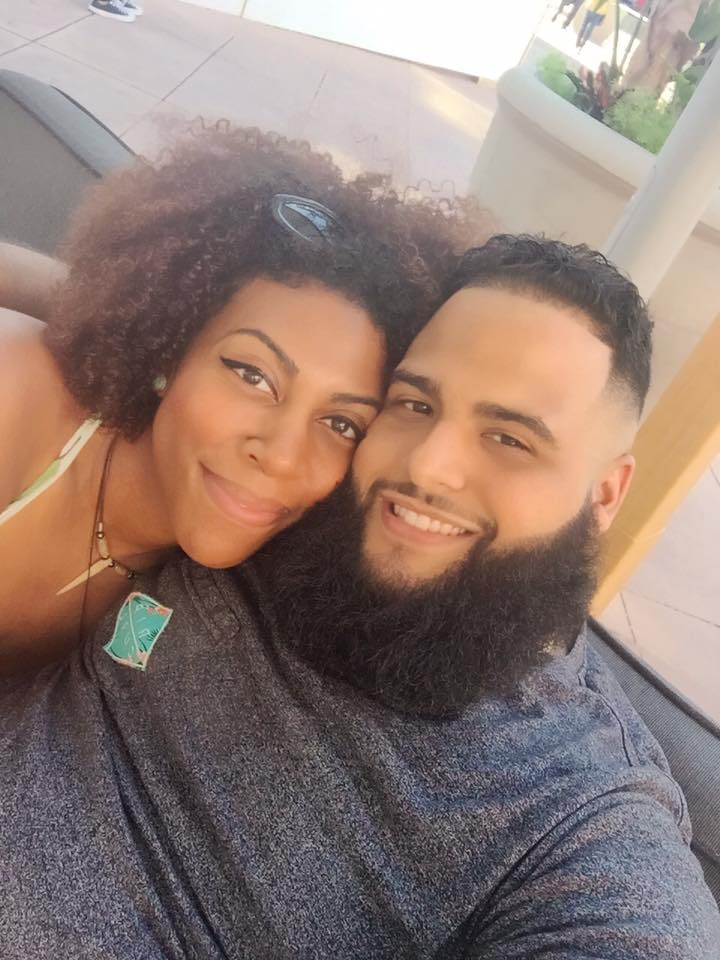 I needed to share my anger and pain with him because I needed him to understand Philando could have been me, my father, my uncle, my sister or my mother. During that time, I thought it would be an injustice to my family if I didn’t show him how much it meant to me. I thought: if I don’t mention this to him, who will? As a Black woman, it’s my duty to speak up in when injustice plagues the news. Staying quiet during a time like that would have been a disservice to my people, to my family and to myself. No one can learn if people are silent.

Marko and Alana’s relationship is basically like mine… minus the bloodshed, space travel, and magic

In Saga Issue 8, a flashback depicts the time when Marko was being held prisoner under Alana’s watch because he was an enemy combatant. She denied him food, demanded he never speak in his native tongue, and would beat him if he disobeyed. She went so far as to call him a “Moony,” which is basically the n-word for people who hail from Wreath. After reading one of her favorite love stories, A Night Time Smoke penned by a cyclops novelist named D. Oswald Heist, to him in their Secret Book Club, she eventually began to see him in a different light. Alana learned to understand Marko is a living being just like she is.

In Issue 10, they both find hidden meaning in the love story and come to realize the war is simply an endless cycle of violence that “has to be stopped. Alana frees him and they share their first kiss. This scene shows how love and understanding can quell feelings of doubt, mistrust, and prejudice.

The dissimilar characteristics between the protagonists are striking. Alana has wings, Marko has horns. Marko had a supportive and loving family while Alana’s kin was entangled in mistrust and resentment. The people of Landfall are technologically advanced while the people of Wreath rely heavily on magic. They may be mismatched in terms of their physical traits and heritage, but they use their differences to educate one another; this keeps balance in their relationship. Furthermore, Alana and Marko possess seemingly incompatible personality traits, which was highlighted in their hilarious yet passionate love-making scene in Issue 11.

Alana is worrisome, anxious, and stubborn. Marko is laid-back, even-tempered, and more compromising than she is. Carlos has brown skin and mine is black. He was lucky enough to attend racially diverse schools, while I was one of the few black students in mine. I’m the bull-headed Taurus and he’s the free-spirited Sagittarius. We’re both composed of endless tales of contrasting realities and it gives us quite a bit to talk about.

The duo has their similarities as well. They each appreciate the thrill of visiting other planets, share a fondness for D. Oswald Heist, and dote on their daughter, Hazel. Carlos and I like trying new restaurants and we both enjoy anime!  It’s the little things that help to keep us together. My race is a significant part of my makeup, but its presence doesn’t have to dictate the success of my relationship. In Issue 15, Marko says he and Alana are “good collaborators,” and I believe my boyfriend and I are as well.

Even though Carlos and I have similar interests and have learned to accept some of our differences, we do run into obstacles from time to time. Initially, my father wasn’t so accepting of me choosing a non-Black partner; this was similar to how Marko’s mother Klara says in Issue 8 that she wasn’t fond of his choice in Alana because she’s an “overgrown fly that he [Marko] decided to bed down with.” She’s much harsher than my father because Klara blatantly disrespects Alana and mentions her preference for Marko’s ex, Gwendolyn, a fellow Wreather. Even though my experience wasn’t as dramatic, it still caused some tension early on.

Furthermore, not every experience of mine is so simple for me to express.

These were tough feelings for me to express to someone who’s never quite felt that way. In short, our relationship consists of a lot of explanations. I explain my feelings, my thoughts, the whys, the whats, my lack of trust in people, and my fears. Even if Carlos may not fully grasp my feelings, he’s at least very attentive to them. I think this is why our relationship actually does work.

In Saga Issue 1, Marko mentions he’s made a personal vow to reject violence. Alana doesn’t always quite understand because she thinks violence is the only way to survive sometimes. In Issue 2, he has to explain again why he won’t use his sword to cut them free from the vines that have trapped them. Certain topics take more explaining than others and Alana handles it well as she still loves and accepts him even though she doesn’t agree. More importantly, she doesn’t force him to change his beliefs.

I’m much more reserved in comparison to Carlos; he’s an open book but he never forces me to tell him my feelings and he waits until I’m ready. Since he’s given me the space I needed to express myself, I’ve found that I’ve been able to share bits of and pieces of myself that I’ve never shared with anyone else. I never thought I would reach a point where I could be as open with my feelings as I am now, but I’ve come to realize my feelings make me who I am. My silence would keep my relationship from blossoming. It would keep me from allowing someone to know the real me.

Since I’ve shared so much with him, when he says, “I love you,” I know he’s really saying, “I love you because we have so much to share with each other, I love where you come from, your ancestors, your spiraled hair, your chocolate skin. I admire your people because they made you, I love the passion you have for your Blackness, and I’ll help you preserve it.”

Overall, I see my relationship in Marko and Alana’s and it’s a blessing to see an interracial couple have the spotlight in a comic. Their differences aren’t hidden and they’re not characterized as ignorant people who say they “don’t see color,” or “I have [insert race here] friends, so I can’t be racist.” Everyone sees color, and most people suffer from feelings of prejudice towards others. We can’t control our initial perceptions of others, but we can control how we treat others when we learn of their differences. Do we condemn them, assault them, and kill them, or do we learn to accept them? Marko and Alana chose the latter and so have I. If everyone tried to be more understanding, the world would be a little bit more peaceful.

Author Bio: Ayana, a BGN intern, is a makeup-obsessed geeky Black girl. She’s passionate about racial issues, comics, and prides herself on being a strong Black woman. She aspires to get her Masters degree in Journalism and when she’s not writing, she’s watching any show, a slice of pepperoni pizza in hand, featuring a black female lead. When she’s not eating, she’s drooling over kitten photos on the web!

Review: ‘The Photograph’ is a Love Story for a New Generation of Romantics