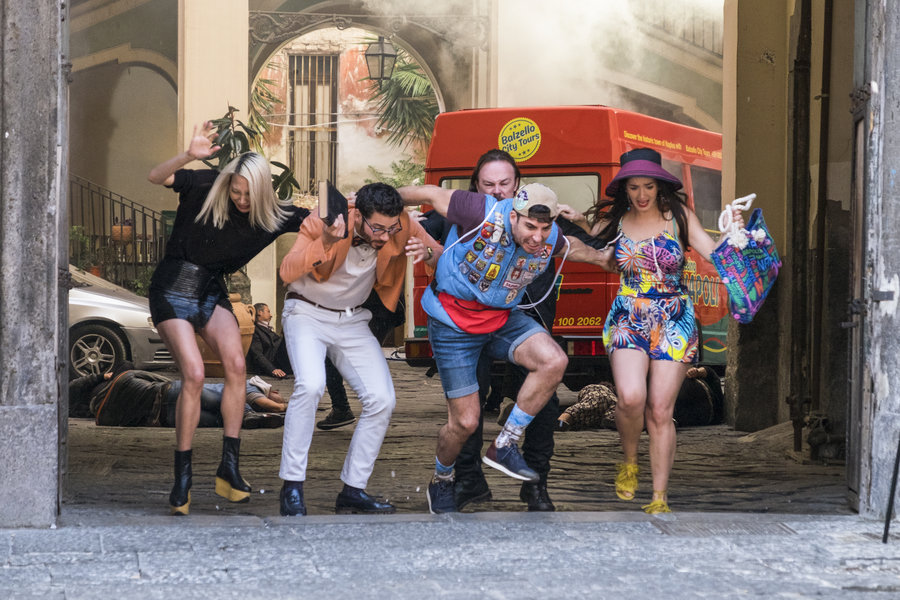 We finally got closure on all of our beloved Sense8 characters and just in time for #PrideMonth. When we left our team, Wolfgang (Max Riemelt) had been captured by the evil group, called the BPO (Biological Preservation Agency) hellbent on hunting the cluster down. But, our favorite cluster had Whispers (Terrence Mann) captured and hidden away, the serial killer who had the sensory connection that the cluster shared but used it to hunt the others. They also had a mysterious man, Jonas (Naveen Andrews), who we never really know a full backstory on.

Despite the loss of a member, the cluster was together: Lito (Miguel Angel Silvestre), Nomi (Jamie Clayton), Will (Brian J. Smith), Sun (Bae Doona), Riley (Tuppence Middleton), Kala (Tina Desai), Capheus Aml Ameen and later by Toby Onwumere), along with the nonsensory partners Amanita (Freema Agyeman), Daniela (Erendira Ibarra) and Hernando (Alfonso Herrera). The cluster becomes a family of sorts when they are joined by Kala’s husband and Bug, Nomi’s mentor. However, the togetherness doesn’t last long, as this is Sense8 and there’s a lot of unfinished business.

The two-hour episode does succeed in giving fans a fully fleshed out tale, complete with the backstory on the rest of the cluster.  This time, its Wolfgang’s turn. We find out about his disturbing origins and the childhood that essentially drove a boy to become a killer. Jonas and Angelica’s history is revealed and with it, the role Whispers played in the creation of the BPO. Other sensates are introduced who all want to work to get rid of the BPO.

While the action is going on, so are the families that are so unique to Sense8’ storyworld—an element that I love about the series. Lito, Hernando, and Daniella are a family, whose love is no for anyone to define—and the group doesn’t. The same occurs when Wolfgang is reunited with Kala, who also has her husband Rajan joins the group on the run. They begin to morph into an organic unit that no one understands. Any questions are satisfied with a shrug as the cluster has turned themselves over to fate, nature, the universe, or whatever higher power they call it.

Creators of the show Lana and Lilly Wachowski, who also run and direct several episodes, formed a complex science fiction narrative. Under the cat and mouse format and the fantastic concepts, Sense8  toys with an idea of the way life and love are supposed to work. The show reflects what happens when the people involved in a relationship know what they are doing, figuring out how they fit in each others’ lives. Their life together affects no one else, so outsiders need not comment on the relationship or even attempt to define it. Lito simply called their trio, “family,” which is the most fitting word for things. It’s also all the information that someone outside the group should have.

And it works. The Wachowskis expertly weave in a romantic element that is fitting for Pride Month.

Aside from the relationships, Sense8 also feeds our penchant for the science fiction and fantasy. From the beautifully choreographed fights Sun, WIll, and Wolfgang stand in for, to the highly complex origins of Whispers and the BPO, there is plenty here to satisfy the nerd soul. There’s loads of computer hacking, high-speed car fights, foot chases, and sting operations that use a wacky comedic Lucille Ball-like script to fake out the bad guys. There is never a dull moment. Even the closure that’s given (I won’t give it away, no spoilers), is more than enough to leave us simply sad at the close of the series and not wanting for answers. The fans get all we need before the credits roll.

If nothing else, the ending seals all the romantic holes (no pun intended). The small groups in their private love-making build to a crescendo of bodies that symbolize how intertwined the cluster truly is. It is also a statement of love, especially in the different kinds of sex being practiced freely, without judgment, punishment, or undue pressure. This finale begins with everyone together and ends that way too. It is the essential romance narrative for Pride.

If you are worried about crying your eyes out at the Sense8 finale, don’t. The Wachowskis made a great tribute to our favorite cluster and closed with an outpouring of love so powerful that it flows from the screen. If you do cry, it will be happy tears, I promise.

Saying Goodbye to ‘Sense8’, One of the Most Inclusive Television Shows of All Time

In Preparation for Coming Out: A Mother’s Wish for Pride