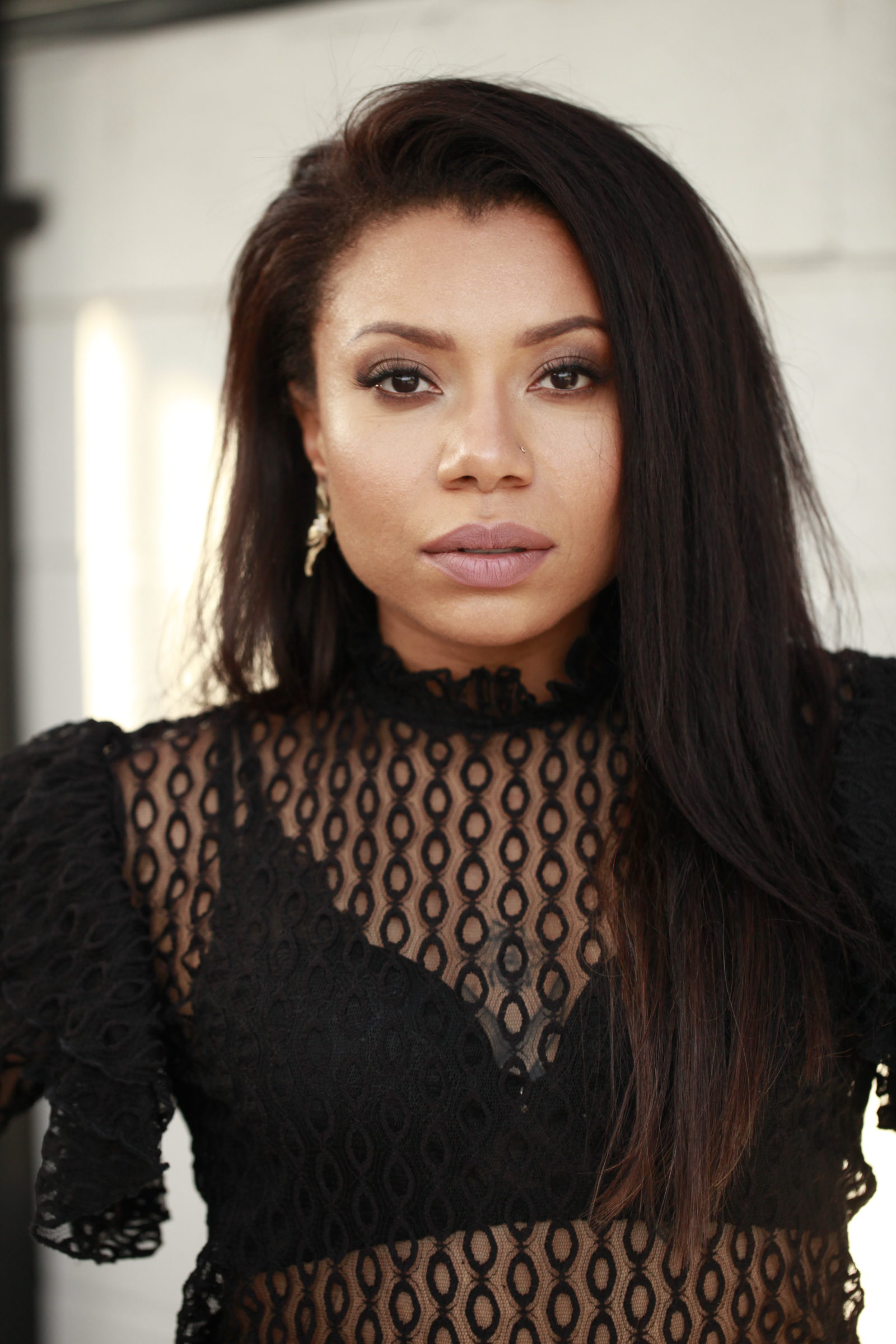 Star of stage and screen Shalita Grant is paving her own lane as she takes Hollywood by storm. The Tony-nominated actress naturally elevates any role with her fearless acumen and talent. Even at 4’11”, she’s a huge presence and commands the attention of any room she enters.

I first became aware of Grant in her role as Cassidy on HBO Max’s Search Party. The show follows a group of millenials as a simple search for a missing girl turns to murder, cover-up, conviction, and abduction. During Season 3, we see Dory (Alia Shawkat) on trial, and through a favor, Cassidy is assigned as her lawyer. It’s her first case ever, and at first she appears more concerned with her couture than the actual case. She’s in a handful of episodes, but each time she graces the screen, it’s easier to become enamoured with her. I went from thinking she was a vapid neophyte to openly rooting for her. I wondered to myself, “Who is this actor?”

She’s Black, she’s beautiful, and her timing is impeccable. I had to learn more! This is the effect Grant has, so I was excited to speak with her on the phone about her career.

“Oh wow! So, Miss Stacey, it was all luck and happenstance for me!” A practiced raconteur, that’s how Grant jovially begins to tell me how she got started in the business. “Between my two parents I’m the only child, but I’m really the oldest of something like nine kids. So there was a lot of chaos and moving. I went to six different elementary schools because I was moving so much.”

Grant managed to stay in the same middle school, but was worried about yet another move. That’s when she received news that the Appomattox Regional Governor’s School for the Arts and Technology was opening and would accept students from all over the region. Desperate for stability, Grant was sure she could act. She didn’t just prepare a monologue — she prepared an entire scene from A Raisin in the Sun.

“I played Mama and Beneatha, where Beneatha tells Mama she doesn’t believe in God,” Grant says. “And Mama slaps her, so I slapped myself and then I turned and received the slap! And I got into the school!” You’d think it would have been smooth sailing from there, but first Grant had to shed some past baggage and the weight of teenage rebellion.

“I don’t know if you watch TED Talks, but there’s this thing called the ‘Expectation Gap,’” she says. “You have this expectation of what a thing is going to be, and then there’s the reality of the thing. The gap between your expectation and the reality is the amount of unhappiness you experience. Basically that was me.” A stellar audition may have gotten Grant into the school, but she’d need more to succeed. “They were challenging me, and I would audition and not get parts. So being a sour teenager by this point, I was like ‘F*ck this school!’”

Grant laughs a little; it’s clearly a frustratingly fond memory. She recalls the ups and downs of the next few months; ex-rolling from the school, hanging out with drug dealers and gang bangers, and being sent to Baltimore to live with her dad’s family. “My dad left school in sixth grade so he assumed that nobody wanted to go to school. So after Governor’s school, I go to his house, I look up, and it’s a month later and I’m the nanny. He had four other kids, so I was walking them to school and cooking and watching Maury. I knew I didn’t want that life. I wanted to get out. I wanting to go back to f*cking school!”

Grant started to campaign to go back to school and knew instantly she wasn’t made for public schools. She found Baltimore School for the Arts in the middle of what was supposed to be her 10th grade year, and asked to audition. “We were so blessed,” she says, “I explained that I knew they weren’t auditioning now but could I get an audition? I was like, I can do it right now! The head of the program, a man named Donald Hicken, said to come back in a week and I could audition.” You’d think it would be at this part of the story that she says, “And the rest was history,” but there are still more twists and turns.

“I had an acting teacher who asked me if I was interested in college. I was thinking about going into nursing, but they said I should audition for Juilliard. And I was like, ‘What’s that?’” Grant laughs brightly. “I knew the name from that movie Save the Last Dance, but that was it. So I auditioned there, University of the Arts, and University of Minnesota, and I got into all three, but Juilliard gave me the most money. It wasn’t until midway through orientation where they’re talking about the history of Juilliard School, and it’s only 18 of us in the drama division each year, that I found out that I got into the best school in the country for what I wanted to do. So that’s how I got into the business. It saved my life.”

It’s an amazing story that showcases the resilience and tenacity of Grant’s indefatigable spirit. Soon after graduating Juilliard, Grant moved to Broadway, becoming a Tony-nominated actress in under three years. Then after a move to LA to try television, she booked a series regular role after only a year. Some of the rebellious nature still resides inside of Grant as she is always looking for the next mountain to climb. “It’s not a career I would ever tell people to go into for stability. But it has been the most consistent thing that’s gotten me the furthest I’ve ever gone in the world.”

About Grant’s two characters: While Search Party’s Cassidy is terrible, she’s the least terrible in a group of monsters. You’s Sherry Conrad appears to be the entire group of monsters. Where Cassidy has naivety on her side, Sherry is a kind of Lawful Evil. She knows she’s terrible, and she knows how to put on a good face to cover it.

“That’s almost verbatim the way I describe Cassidy vs. Sherry,” Grant replies when asked about this. “Cassidy isn’t aware of how horrible she is, but she has a heart of gold. Sherry is aware, and you might find at the end that she actually does have a heart of gold. The marriage is real, and her love is real. What I love about Season 3 [of You] is that 1–4 is your introduction to Madre Linda.” Madre Linda is the suburban NorCal setting for the next season. We see Joe (Penn Badgely) and Love (Victoria Pedretti) settle there with their new baby boy Henry Forty Quinn-Goldberg in tow. Also… there’s murder. “Episodes 5–8 flip everything you expect to happen upside down. Then 8–10, it’s like the top of the roller coaster, and you just hold on for dear life. So I would say Sherry makes a horrible first impression, but things could change.”

Grant can be found on Instagram @shalitagrant where you can see her poling vids and learn more about her new line of Black hair care.

The third season of You premieres Friday, October 15, on Netflix.