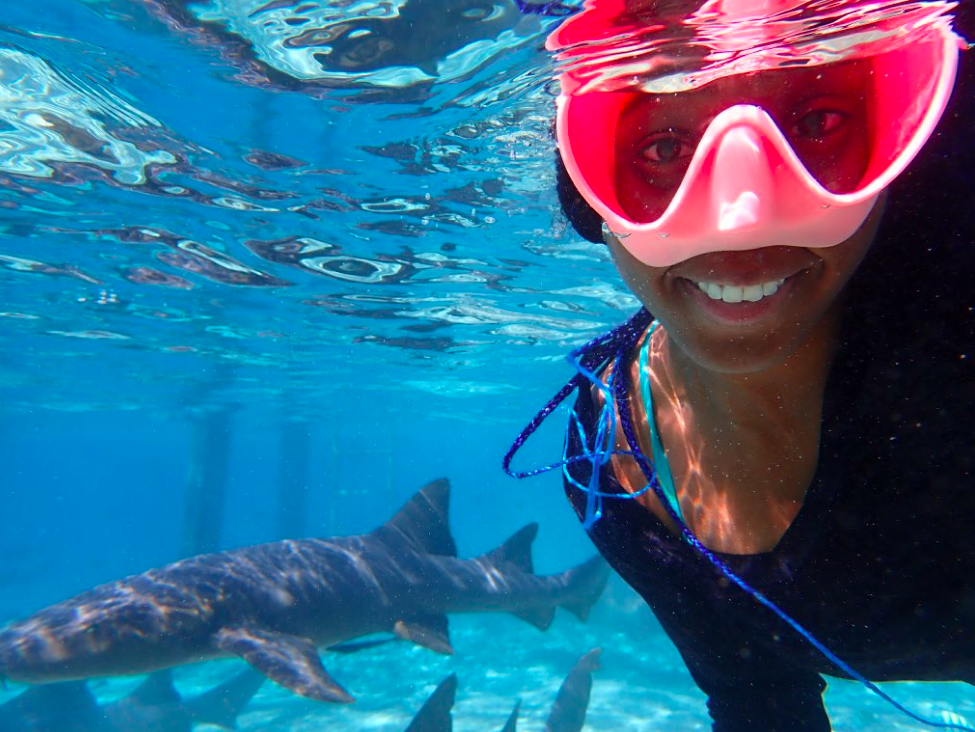 National Geographic’s SharkFest program has it all: from beautiful ocean views to experts speaking on the issues, to footage of a variety of sharks, all of which kicked off July 5 and spans over six weeks.

Early in August, this writer had the fortuitous opportunity to have an online interview with an actual marine biologist in the field, Carlee Jackson. Jackson is not only a marine biologist but is also a sea turtle conservationist and shark expert who is championing diversity in the world of science. Catch Jackson in Shark Attack Files, where she educates viewers on how to coexist with sharks.

Jackson speaks on her experiences and the challenges she overcame as a minority during schooling/training. She also co-founded the non-profit MISS (Minorities in Shark Sciences), which is aimed at encouraging women of color to pursue a career in shark sciences. Carlee has a message for POC and women, she wants to educate and recruit you to join her in the field of marine biology.

What inspired you to pursue a career in marine biology?

I knew at a young age that I wanted to be a marine biologist, and it stuck with me as I got older. The ocean was, and still is, so mysterious to me!

What do you believe is the biggest myth that surrounds sharks and sea turtles?

There are so many huge myths surrounding sharks, but one of my favorites is that sharks are all the same. Sharks are one of the most diverse species of animal in the ocean! There are over 500 different species of shark, spread across the entire Earth. Each species comes in different colors, patterns, and shapes. The majority of shark species are at most five feet long.

A fun myth about sea turtles is that they are slow-moving and not strong. Sea turtles are, in fact, very fast in the water! And out of the water they are strong — and not nice in my experience!

There are so many sea animals — why sharks?

I vividly remember being in a bookstore with my mom when a thin paperback book with a shark on its cover caught my eye. Something told me that I needed to read that book, so I begged my mom to buy the book for me. After reading the book, I was absolutely hooked on sharks! I can’t remember exactly what it was, but something about them fascinated me and I knew I wanted to learn more about them and work with sharks in the future. I grew up in Detroit, Michigan, with no access to the ocean. My only access to sharks was through books.

Can you speak about your daily activities? Are your responsibilities different from other marine biologists?

There are a variety of careers within marine biology. Every marine biologist has a different role that contributes to some aspect of marine biology. My previous jobs have ranged from education to field technician-related duties. As an educator, my daily activities included teaching kids about marine biology with hands-on field activities. My technician job consisted of conducting sea turtle beach surveys at the crack of dawn every day for eight months and working in a sea turtle rehabilitation facility. My current job as a research associate has more office work weaved into it. I work on planning and preparing experiments, doing some work out in the field, writing protocols and proposals, and analyzing data.

To date, what is your most memorable accomplishment?

The completion and defending my master’s thesis. There is a lot of time, blood, sweat, and tears that are put into a master’s thesis. I sacrificed a lot of my mental health and sanity during graduate school. I am immensely proud of myself for pushing through, planning research for the first time, and completing my thesis during a global pandemic. It was the first time I truly felt like a shark scientist.

What do you hope your audiences will gain from this series?

In the National Geographic series, Shark Attack Files, I hope the audience pays attention to the science. Shark attacks are shown, but we debunk a lot of the myths associated with shark/human encounters. I encourage the audience to take notice of the unique features and superpowers the different shark species shown have. We try to convey that sharks are not mindless eating machines, but are in fact intelligent, fascinating predators.

What can everyday citizens do to ensure the safety of sharks and other marine life?

A common misconception is that you need to live near the coast to have an impact on marine life and the ocean. That is completely false. Some simple things everyday citizens can do include recycling, reducing their use of single-use plastics, and eating sustainable seafood. Another way to help sharks is to increase your awareness. Finally, many shark-focused organizations are nonprofits. Donating to these organizations directly contributes to shark science.

What do you hope will happen when more women of color join the mostly male-dominated field?

Having a very monotonous group of people doing shark science means there’s most likely a monotonous way of thinking and approaching scientific questions. Diversity in people yields a diverse way of thinking, which leads to innovation. So, I wholeheartedly believe we will be making many new discoveries in shark science at a faster pace when more women of color join this field!

What skills or qualities would you say are needed to be an effective marine biologist?

A particularly important skill across the board is communication. Being able to communicate your science is extremely useful when it comes to educating the public or your peers. I personally believe all marine biologists should develop science communication skills.

What advice can you offer our readers here at Black Girl Nerds who want to pursue a career in marine biology?

As a Black woman navigating through this field, I was often discouraged from pursuing this career and told I wouldn’t really go anywhere. I chose to ignore those people and pursue my passion.

Another piece of advice is to try different things. There are so many different subjects you can focus on, but it’s especially important to try things out first.

Can you tell us a fun fact about sharks?

One of my favorite facts is that the Greenland shark is the oldest living vertebrate known to date. They can live for up to 500 years and live the majority of their life completely blind. They grow extremely slow (less than 1 centimeter per year), which is one way we know how long they can live.

Shark Attack Files is currently available to view on available on Nat Geo WILD and Disney+.