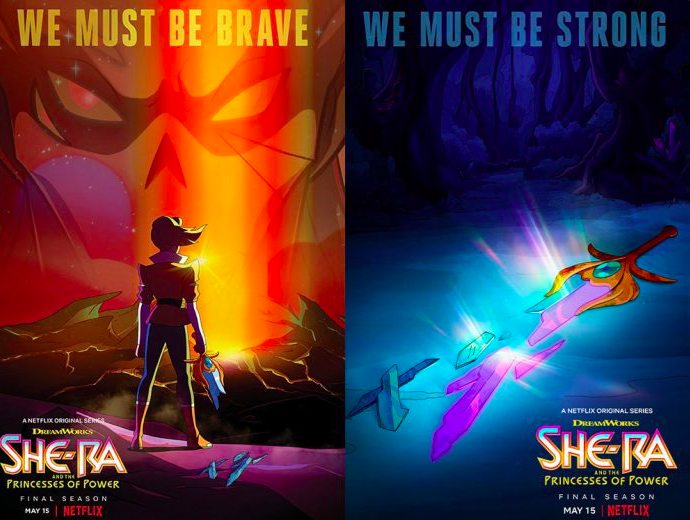 With a heavy heart, I must write the final review of one of the most beloved reboots. She-Ra and the Princesses of Power animated series is a culmination of many young queer people’s dreams of seeing representation on the small screen.

While its time was brief, only adding up to less than two years and fifty-two episodes, it was a work that has touched the lives of many of its viewers. This final season is filled with devastating emotional revelations, gentle moments of love, and brief instances of laughter.

Director Noelle Stevenson’s work has raised the bar for queer representation in media. The re-imagined nostalgic new animated series, which was especially created for young audiences, has appealed to a larger audience with its colorful characters and creative storylines. Released in 2018, the series has taken to task the status-quo and redefined what it means to be a hero.

I was lucky enough to be among a very few selected individuals to interview the show-runner and creator Noelle Stevenson, as well as She-Ra’s voice actor Aimee Carrero (this interview can be found here). The series has been one of the most refreshing that I have seen in a long time. Every scene was so jam-packed with great content that a second watch is recommended, nay, required to get all aspects that might have been missed in the first viewing.

The fifth season starts off with Glimmer (Karen Fukuhara) captured by Horde Prime (Keston John), and Catra (AJ Michalka) having to start over with a new Horde leader. She-Ra’s sword is broken, and the team must work together to fight off the ever-advancing Horde Prime. Each character must try to find a way to overcome their obstacles.

The best part of this series is that it develops the characters in meaningful ways. Two of my personal favorite “villains” are Catra and Shadow Weaver. These two are also probably the most developed characters in the series. As you trace their development in the show, these two are unable to fully express how they feel to one another, their community, or even to themselves. Shadow Weaver is portrayed as phlegmatic, always wearing a mask to hide her facial expressions and being seen as a harsh authoritarian mother figure. But her ultimate goal was always to make Adora and Catra better and stronger. She is hard on them because she knows the world will be harder.

The toxic, destructive, and hard to love (at times) Catra finally receives her redemption arc. Catra has always seemed so recalcitrant, fighting against her own feelings of insecurity, unfairness, and desire to be loved. The final scene of Catra and Shadow Weaver could not have been more beautiful. When they are finally able to express to each other how they feel, the words somehow feel like enough.

Every character’s arc is explored, and while Entrapta (Christine Woods) has always been a pinnacle princess in the advancement of technology, her role becomes far more important as she helps to outmaneuver her competitors. Entrapta’s scenes in which she forges the link between empathy and technology will break your heart. So many of the characters come from broken homes. Each one feels moments of imperfection, loneliness, and vulnerability. As they struggle to find their destiny, they attempt to harness the power they hold to protect the ones they care so deeply about.

The last season explores the severed connection between She-Ra and the sword. “When I broke the sword, I thought I could make my own destiny; I don’t know what my destiny is anymore.” The sword was so closely knit to a previously defined fate. Once Adora breaks the sword, it allows her to be free from the past. This realization is complicated as she gains a better understanding as to what her own feelings and desires are. Adora is able to find her own path but is unsure of how. She is no longer bound and discovers she is more than what she can offer others. Adora is still filled with doubt, uncertainty, and fear, all of which she must find a way to overcome before the final battle. The final scene with Adora and her friends is one of pure elation. These scenes allow us to see both Catra and Adora in a whole new light.

The final season of She-Ra highlights so much inclusion and representation, it is amazing. It brings princess of many ages, shapes, colors, and loves together into a show that has a lot of heart. Growing up, these kinds of cartoons were not allowed in my household, if they were even made. This series allows for many, myself included, to feel less alone.

Being one of the many who experienced the series finale on May 15 when it aired on Netflix, I got the chance to see this lifelong dream realized. It was magical. It explored the message of queerness that has been oversexualized by other media and showed it in a less aggressive, more compassionate way. This might be what makes this series so wonderful to watch.

There is still time to catch up and see what made this series so magical. If there is one fault about this show, it’s that it does not continue. But maybe that is what makes this work so wonderful. It allows us to imagine the series as we want, and maybe that’s enough. My hope is that this series will inspire many others to create works that are as magnificent as this one.

Review: ‘She-Ra and the Princesses of Power’ Is Worthy of Your Time and My Personal Female Icon