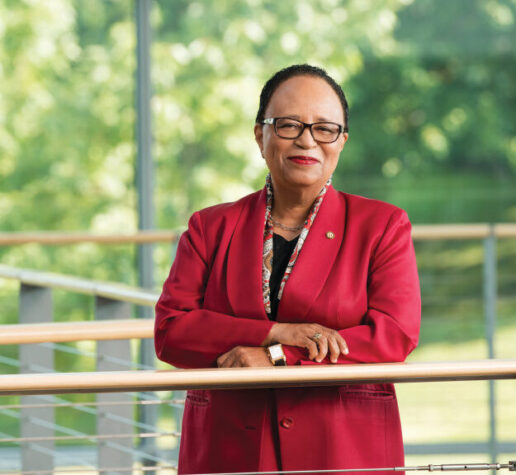 The world of academia has not always welcomed people of color, let alone Black women. According to Amy Diehl, Ph.D. who told Forbes, “Women leaders of color in higher education face a double-jeopardy of race and gender bias.” This barrier hinders their career advancement. Also, less than 20 percent of lecturers, professors, and chairpersons in college settings are represented by women of color.

Yet, Dr. Shirley Ann Jackson has been and continues to be a groundbreaking leader in the world of technology, science, and academia. Born in Washington, DC, on August 5, 1946, she grew up in a household that treasured education. She attended Roosevelt High School, where she was in the accelerated programs in both science and math. In 1964 she graduated as valedictorian. Shortly after Dr. Jackson attended the Massachusetts Institute of Technology and received an S.B. in Physics and a Ph. D. in Theoretical Elementary Particle Physics. When she started, she was one of twenty African American students. She was the only one studying theoretical physics and became the first African American to receive a degree at MIT.

When she first began university in 1964, she felt isolated. She was often shunned by her classmates and not accepted into study groups. But, she didn’t give up. She knew what she was capable of and focused on her work. Throughout her time at MIT, she organized a Black Student Union and helped increase the entrance rates of Black students. For Women’s History Month, let’s look at Jackson’s long list of accomplishments and why they matter for women of color.

What do fiber optic cells, touch-tone phones, fax machines, and caller ID all have in common? They were all made possible by Dr. Jackson. Her research laid the foundation for the previously mentioned inventions. Although physics is not a popular subject amongst the masses, Dr. Jackson excelled in it. So much so that at the beginning of her career she worked with AT&T Bell Laboratories in the Theoretical Physics Research Department.

As one of the top scientists in her field, she caught the attention of President Bill Clinton. In 1995 she was the first African American woman to serve as Chairman of the U.S. Nuclear Regulatory Commission.

Her run-ins with presidents didn’t stop with Clinton. On May 19, 2016, President Barack Obama presented her with the National Medal of Honor. This is the highest scientific achievement that is presented by the U.S. government. Under President Obama, she was a part of the President’s Council of Advisors on Science and Technology (PCAST). During her time with PCAST, she focused on issues surrounding cybersecurity, digital technology, and national and global security.

She also brings in the money. Since her tenure, she has created The Rensselaer Plan, a $1.3 billion project. Her work at Rensselaer includes the Transformative: Campaign for Global Change started in October 2017. The three pillars of this project are student and faculty support and expanding scholarships and financial aid. In 2001 she secured one of the largest anonymous donations for a university in the United States and brought in $360 million.

She’s helped diversify the student body and faculty through gender, ethnicity, and geographic background, along with quadrupling research funding. The funding of graduate students’ research is of great importance and an element that she refers to as “the basis of our innovation ecosystem.”

One of her more notable awards is being the first woman to win the Black Engineer of the Year Award by US Black Engineer & Information Technology Magazine, in February 2001. In March 2000, from the National Society of Black Engineers. Dr. Jackson was awarded the Golden Torch Award for Lifetime Achievement in Academia.

Why her story matters

For decades, the images of Black women have been associated with being a maid, anger, or a sex symbol. Jackson helps to put all those stereotypes to rest.

Almost everything that Dr. Jackson does, she thinks of the long-term effects by creating opportunities for others. She sees the future molded by university students and university graduates. She fights against inequality and racism by opening doors for those eager to make a difference.

Amongst all her accomplishments, the most inspiring thing about Dr. Jackson is that she is still going. She is still striving to support the next generation.

As Dr. Jackson said in a promotional video: “Someone helped us to get to where we are, someone enabled the education, the world-class education that allowed us to make a difference in the world, now we have the opportunity to help the next generations of students…students that are just as eager, just as capable…they know the challenges we face, they see opportunities in those challenges.”

PODCAST: Dr. Anthony Fauci and Living with the Vaccine in 2021