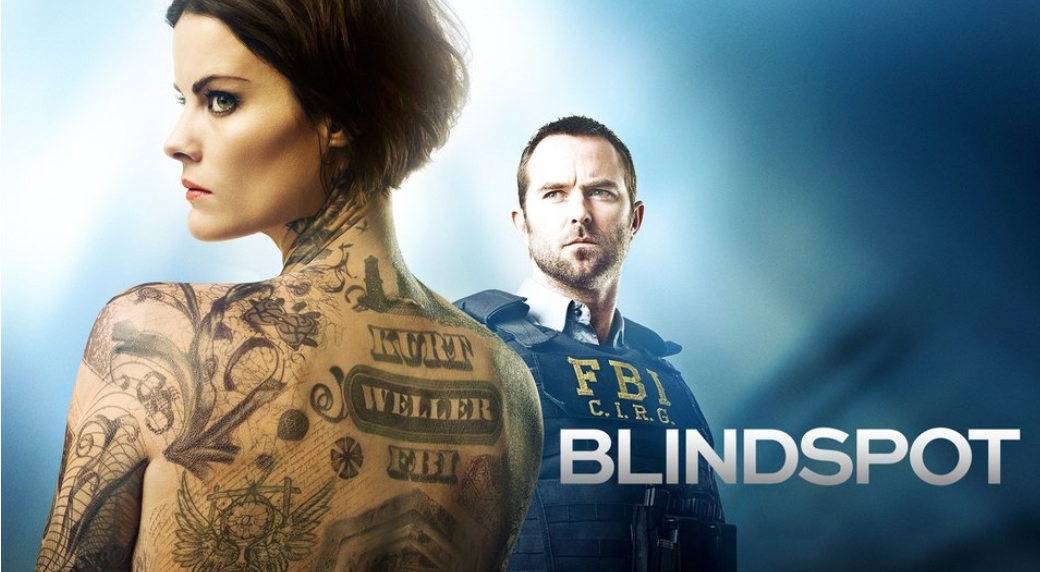 Blindspot left us all hanging, and I don’t know what I will do until January. I just wanted to put that out there. This fall finale episode had a lot happen in an hour.

To kick things off, Roman takes Jane in on the action. She manages to swipe his phone and reaches out to the team. She tells them all she saw and heard, sends photos, and, together, Jane and the crew decide Phase 2 is to blow all the transformers, sending the country into darkness. It was nice to get some insight into phase 2, but for it to be just to blow transformers? A blackout? Oh. We are so scared. Shaking in our boots over here.

Jane is nervous but confident her team will come in and save the day. She has a cute moment with brother Roman when they chew some gum they used to enjoy as kids. Roman is chewing away and staring at Jane. It’s then I realize something is wrong… Jane says the gum tastes funny and passes out.

While Jane is passed out, Weller gets a call telling him Allie has been in a car accident and he needs to come to the hospital ASAP.

Jane wakes up, and it’s obvious that Roman told Sheppard everything. Roman didn’t really have to say much because Sheppard tells Jane she never trusted her. Jane’s act was a waste, and Sheppard was just getting her to a point where she could make her pay. That, and Romans plea to Sheppard that he could turn her.

Sheppard then reveals to Jane that Phase 2 isn’t happening and forces her to watch as she blows up Jane’s team. Then Sheppard  tells Roman to kill Jane. Luckily, blood wins in this case, and he turns on Sheppard. Sheppard holds her own against her well-trained children, but after many kicks and punches, a gunshot from Sheppard takes her down. Jane wants to take Roman to a hospital to fix a wound he got in the fight, but, of course, he refuses and demands they go to a safe house.

At the safe house I got really sad. Jane was clearly torn between having a life with her brother and protecting herself and him. She put her big sister pants on, stealthily loaded a needle with the same memory-erasing drugs used on her, and tearfully injected Roman. She wishes him a good life and a chance to start over. So sad.

Then things get emotional. Reade says he loves Zapata and was there as the coach died, and he didn’t call help for him and apologized for lying. I’m glad he finally told Zapata, it’s a shame he waited so long to say something. I mean she helped cover for him when she thought she killed a man, stole evidence and they were in his apartment in their underwear a few episodes back. Don’t they know #RelationshipGoals when they see them?!

Next up, we get the reveal that Dr. Borden is the mole, the seemingly innocent, can’t hurt a fly Dr. Borden…. the same Dr. Borden who had the cutest geekiest relationship with Patterson. I had suspected him initially but then figured it had to be Patterson because she just knows everything.

Dr. Borden turned soon after an explosion in Afghanistan. Borden and his wife nursed Jane back to health and hid her when the military came looking for her. His wife, Chris, got killed when their home is bombed in an attempt to be sure Jane and all her secret black ops crew were wiped out. As Dr. Borden is reminiscing and preparing to skip town Patterson comes in. She sees the ring and quickly pieces everything together. Now a woman scorned and trying to  do the right thing, she puts Borden under arrest. He runs, and a fight ensues. They both get their hands on a gun, struggle, and then Boom!

The gun has gone off, and Patterson or Dr. Borden will be on the receiving end of a shot to the abdomen.

I just hope it’s Dr. Borden, Patterson is everything to me as a fellow geek, and she is the brains of Wellers’ team.