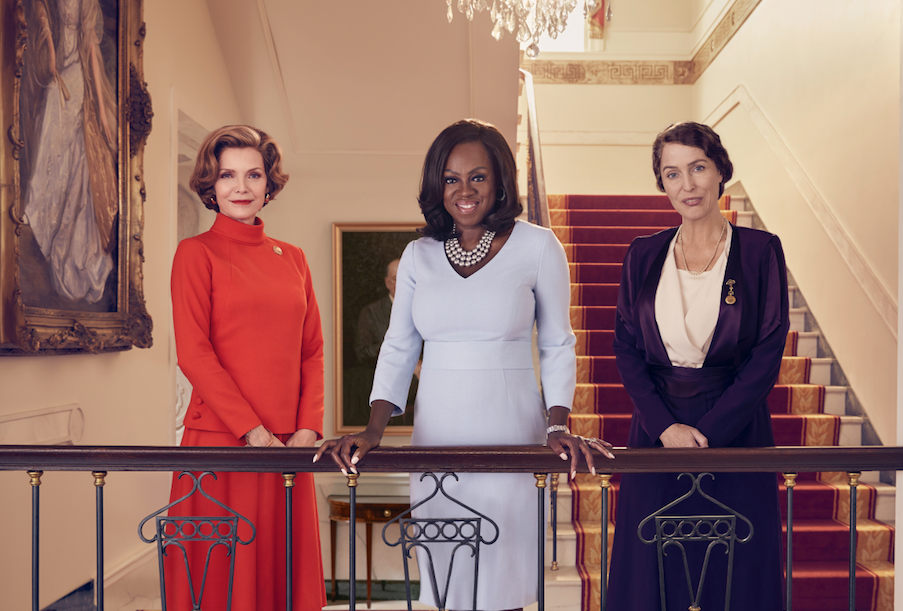 All my life, I attracted ambitious men because I am ambitious, too. They saw in me someone who understood what it was to want more for yourself and thus from, but never thought that, as a woman, I would want the same. Somehow, my power was to support theirs. Showtime’s The First Lady spotlights three generations of wives who watched their husbands become “Leaders of The Free World” and, inadvertently, chained them.

Premiering April 17, The First Lady juxtaposes the experiences of Betty Ford (Michelle Pfeiffer), Michelle Obama (Viola Davis), and Eleanor Roosevelt (Gillian Anderson). They were all women married to powerful men that wanted to be historical. Created by Aaron Cooley, the show intelligently weaves their lives together to make each episode feel thematic.

It’s as if they are chapters on the many sacrifices and existential crises that occur to you when you are more defined by what happens for others than what happens to you. Because each episode features all three of these dynamite actresses, you never get bored. Moreover, it is easy to imagine the plethora of storytelling future seasons can carry as you see them bring to life what has to be one of the most insane roles to ever take up: the first lady.

Davis, Pfeiffer, and Anderson shine in displaying that when you are the First Lady, you are, by all means, married to the nation: at times, more so than your husband. Davis captures the strength, intelligence, and sweetness of Michelle Obama in understanding the gravity of being the first black First Lady while also struggling with the weight of such a public feat.

To the world, she is a symbol of progress and married to a man who embodies change. Yet to her, she is a mother of two black girls that will be scoped for their every move, especially in terms of beauty.

Davis emotes Michelle’s desire to both hide from and face off with the very world her husband is trying to lead, especially as the rise of Trump brews under a backdrop of her sincere questions: Are people grateful? Does this world want leaders to clean up their messes or teach them how to stop making them? Pfeiffer is not far behind in balancing the woes of being a public figure and a private person, but either way, dissected for her supposed weaknesses.

I have to say I was shooketh by Michelle Pfeiffer’s role. She immerses herself into Betty Ford’s flaws, struggles for sobriety, and the crackling pain of being pushed further into the spotlight when you have so many painful secrets. She wears her First Lady duties like one does a Halloween mask. It is fascinating to see how Pfeiffer portrays Betty’s ability to be the perfect wife in front of everyone and, to put it simply, feel like death when no one is looking.

This dynamic becomes highlighted as her daughter, Dakota Fanning as Susan Ford, becomes her “stability” after years of feeling like Gerald Ford’s malfunctioning, political prop. In many facets, she becomes a center to a weaving thread throughout The First Lady that connects all three women: depression.

Eleanor Roosevelt is historically iconic because, oddly, she was our first female president. She was heavily prominent in Franklin D. Roosevelt’s political campaigns and choices, and her power would only grow as his health declined. The two had immense trust in each other’s wisdom as displayed by Anderson’s chemistry with Kiefer Sutherland as Franklin.

The way they capture the mannerisms and mechanics of their physical and emotional presence is phenomenal, and out of all the featured Presidents like, OT Fagbenle doing a great Obama or Paul Wilson as Richard Nixon, he is the one that most appears and feels equal if not, at times, less powerful than his wife. Betty and Michelle’s struggles lie in the shades of the limelight, but Eleanor is the limelight. She is not handling “first ladyship” as much as a presidency heading into WWII.

Yet, despite being a beacon of empowerment, like the other first wives, all her ideas and desires go into building the Roosevelt name for its men. Meanwhile, she must remain in the shadows when it comes to loving the woman that knows she deserves more than equality, she deserves honor.

To be frank, the husbands take a real back-burner part in this series as they should. For the first time, it is not about you, Mr. President! Instead, the women and their relationships with other women build this show as an important, intriguing historical piece.

I loved watching Eleanor and Hick blossom in romance tension, and I really loved seeing Michelle with her daughters (Saniyya Sidney as Sasha and Lexi Underwood as Malia). So often, we barely recall the first ladies’ presence in their husbands’ administration so it was genuinely enjoyable to see their bonds with other women come to the forefront.

Ultimately, The First Lady is a series on the sadness and strength that manifests in feeling like the most powerful person to be disenfranchised. On Sundays at 9 PM, on Showtime, I was enamored by these women’s journeys and how the series can become so intricate and raw in displaying their vulnerabilities without being exploitative or preachy.