I first heard about Bozoma Saint John in the summer of 2017. She was featured in a New York Times article titled, “Is This the Woman Who Will Save Uber?” It profiled Saint John’s recent selection as Chief Brand Officer of Uber.  Besides the article was a picture of Saint John: cocoa-colored in pink lipstick with long box braids cascading over one shoulder, and linear drop gold earnings dangling above the other. Ya’ll. I was filled with so much pride. Not just because she was a woman or because she was black (which, truth be told, was at least 70% of my pride) but because she looked like someone I’d want to be friends with.  She wasn’t photographed with a politician-bob, pearls, and a power suit, she was unique and unapologetic. There was something tremendously dope about that.

I went on to learn this Wesleyan graduate of Ghanaian descent is a f#cking rockstar.  She worked her way up from being a temporary assistant for Spike Lee to managing major marketing campaigns for Pepsi, Beats and later, Head of Global Consumer Marketing at Apple (she is responsible for the classic commercial featuring Mary J. Blige, Kerry Washington and Taraji P. Henson rocking out to break up songs). She is also a mama and has been open about navigating personal tragedy when she lost her husband to Burkitt Lymphoma in 2013.  Whether it’s her style, resilience or penchant for dope ass lady-crews (as seen on her always popping Instagram account @badassboz), Saint John was someone I had to learn more about! Thankfully, she was kind enough to trade words with Black Girl Nerds. 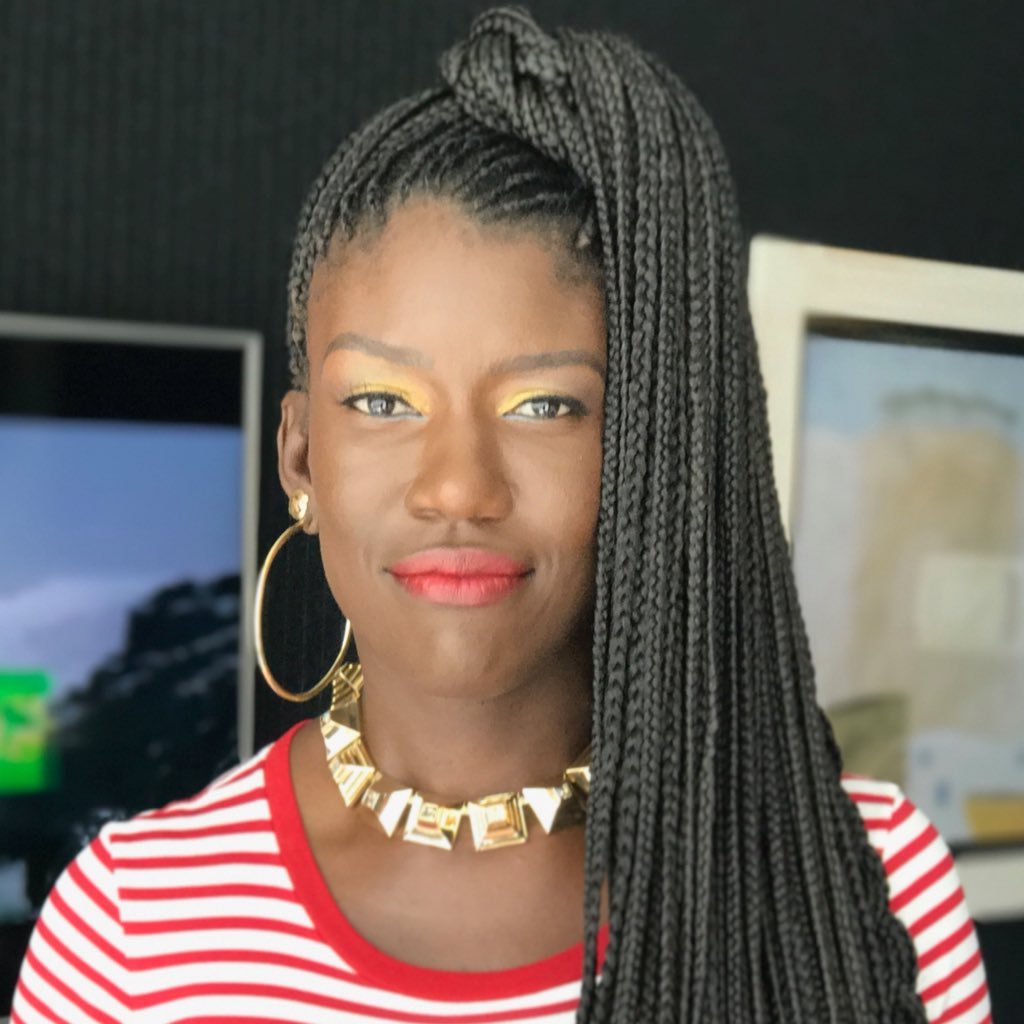 Faye: Congratulations on your recent honor as one of the Ebony Power 100!  As a black woman, it is just a fantastic time to be part of the tribe.  There is you, Viola Davis, Issa, Luvie, Jessica Williams, Yvonne Orji, Lupita, Danai Gurira, Franchesca Ramsey, I could go on… just a beautiful, visible tribe of women walking through this world and dominating the space you choose to occupy.  I find myself thinking, if only you all were around when I was a teenager struggling to find my self-worth, things may have been easier. Like many women, I spent entirely too much of my younger adulthood waiting for someone to give me permission to be who I wanted to be. However, as a 30-something, it means the world to me to see you all surviving and thriving – and supporting one another while you do it! For those brown girls still wondering if they have a right to take the path that is calling them and to dream of existing in places where they do not see faces like their own: how did you find the strength to navigate the feeling of “otherness”? What did you draw on to build a sense of confidence or is it a constant work in progress?

Bozoma:  “Otherness” has always been part of my identity.  And in fact, I’m trying to recall if I know any brown girls who feel otherwise… I don’t know any.  But rather than rebel against that, I celebrate my “otherness”, and I use it as a competitive advantage against those who would diminish me instead.  It’s my unique perspective that makes me look at situations with a different eye, so instead of trying to see things the way the mainstream sees situations, obstacles, and problems, I revel in bringing a different opinion.  It has helped more times than not in being able to use that platform as a way to join projects that are suffering from an inability to solve complex issues.  I’m a complex individual who lives in a complex world so who better to solve those complex challenges.  So to those brown girls who are trying to navigate these spaces, celebrate the “otherness” and reject “sameness”.

Faye: I listened to your interview with Lewis Howes where you talked about getting your first major job with Spike Lee and how that job led to Pepsi, Apple and now, Uber. I just love that you came to work for Spike through a temp agency!  It is a true example of doing the best in a situation because you never know where it may lead.  At the same time, your record of accomplishment demonstrates you are not afraid to bounce and take on new opportunities, even if that means picking up and moving across the country.  So many of us have big dreams. However, our dreams are not always reflected in our day-to-day hustle.  How did you know when an environment was no longer the right fit for where you ultimately aspired to be?

Bozoma: Perspective is everything; especially when looking at our day-to-day hustle vs the big dream picture.  I have always viewed my hustle as the means to achieving the big dream, and the only way to navigate once I started to realize those big dreams coming true.  I still hustle today because I know I’m still building on what is to come. There is no experience too small, or irrelevant to our future goals.  The question isn’t “when am I going to be able to do what I ultimately want to do”, but “what can I take from what I’m doing today to make me ready for success in executing my big dreams.”  I still do that today.

The sooner you show up as yourself, proudly and without apology, the faster you’ll find an environment which encourages you to thrive and contribute at 100.

Faye: I want to talk about personal branding. Recently a 2010 video resurfaced about Rochelle Ritchie, a news anchor who transitioned to natural hair on her path to self-acceptance. She was honest about how difficult it was because she believed straight hair was more accepted in the world of journalism. She worried her natural hair would be a threat to her success. I admire how bold you are in your personal image. You seem to have no hesitation in rocking your natural hair or wearing bright colors.  Have you always embraced a unique personal image? Do you feel a certain level of conformity is necessary for success? Have you ever found yourself compromising elements of who you are to fit into an environment?

Bozoma: Early on in my career, I did try to “dress for the part I want” and I found out that it was a crock of %$#&.  First of all, if someone isn’t going to accept me in my natural state, then they’re never going to accept me at all– it’s better to learn that early.  The larger, more damaging psychological issue with trying to fit into somebody else’s idea of a successful personal brand, is that it completely diminishes who you are, and undercuts your worth.  So then we end up walking around and participating in meetings/idea sessions as if we’re not good enough.  The sooner you show up as yourself, proudly and without apology, the faster you’ll find an environment which encourages you to thrive and contribute at 100.

Faye: Congratulations on your position as Chief Brand Officer for Uber.  In preparing for this interview, I found the topic of Uber very polarizing. In light of past (and not so past) scandals, either folks were on board with Uber or really, really not. However, everyone I talked to was Team ‘You’.  They are solidly Team Boz and all you stand for. Obviously, you would not have jumped on board with Uber (lending your expertise and personal brand) if you did not believe in the mission of the company. What would you say to folks who are feeling some hesitation about riding with Uber? What would you say to get those folks who have deleted the app back on board?

I am eternally grateful that I have Team Boz; it is validating and humbling to know that my support network is so strong.  I want us all to have that kind of support network in knowing that we always have each other’s back.  I have made the decision to come to Uber because I’m able to be a visible part of a company who is learning from its past mistakes and putting in the effort to correct itself.  If we can’t course correct, then we are all admitting that the industries we’re in can’t change for the better for women and people of color.  We need to able to prove that theory wrong.  I also sincerely believe in the future of the product.  It has substantially changed our world, and I intend to help continuing shifting the narrative for  good.  And I will proudly wave the flag for us that we are not only capable of doing the tough jobs but we are capable shining bright while doing it!