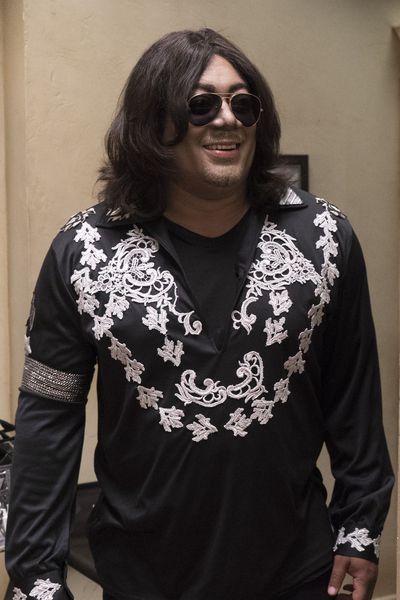 Halloween is upon us. What usually occurs is an eruption of Halloween themed episodes and Speechless delivers.

Most shows that I watch cater to the fun holiday and swing away from the plot. Some like to intertwine and move the plot along while adding some Halloween shenanigans. The good thing about Speechless is the bigger plot is one that can be showcased in numerous ways. This Halloween episode was full of the holiday spirit while also committed to letting us learn more about the DiMeos and Kenneth. In this episode, the young DiMeos eat sixty-year-old candy hidden in a wall and all end up having extremely vivid bad dreams all while Kenneth models his Michael Jackson Halloween outfits. I say outfits instead of costumes because these things were legit.

First on the candy rampage was JJ. He stuffed himself with half a bag of the rotten candy. After going through hallucinations and watching a scene from The Exorcist on TV, JJ dreamt he had to use an Ouija Board as his word board and got possessed by a demon. Feeling empowered, JJ wreaks havoc on his school and kills the janitor that was blocking his ramp access. All the while, we received some nuggets of knowledge. JJ commented that he felt empowered being the bad guy. He mentioned earlier in the episode that people with disabilities, especially people in wheelchairs, are often portrayed weak and thoughtless in horror movies. While possessed, the demon commented on his misconceptions of people with disabilities and how awful insurance is. While it was informing, this episode was a little too concerned with teaching about people with disabilities, more so than usual. It was a little over the top and in your face and not as subtle or ordinary as typical episodes. Once we got past this small wrinkle of the episode, the rest was quite easy.

Dylan thought if she didn’t eat the same candy as JJ, she would be fine. WRONG. When JJ was feeling better, Dylan got sick and had a bad dream that mimicked the movie Freaky Friday. In the dream, she and Ray switched bodies from a magic Halloween candy bowl. Ray loved being Dylan because he didn’t have to worry about getting good grades, he was popular, and he could wear a romper. This boy is out of his mind, but I love it. Ray as Dylan as Dylan as Ray were committed to the psych ward because no one believes they switched bodies. When Dylan finally wakes from her dream, she pushes Ray away and says she will never wear a romper. I love that it was Ray and Dylan that switched bodies because they are so extremely different. There was no teaching moment, but it was hilarious.

Next up was Ray, who accidentally ate the bad candy when Kenneth accidentally put it in the “give to trick or treaters” pile. Ray’s dream mirrored real life, with his parents paying for the whole family (minus Kenneth) to go to an Escape Room. In the first stage of the escape room, all Maya has to do is be on time. She isn’t and the DiMeos spend the better half of their time getting shocked by the floor. At this point the narrator of the Escape Room lets them move on, otherwise, they would be there all day. In the second room, the key is to follow the rules. There are numerous keys on pillars that say “Don’t Touch.” Maya doesn’t listen and Ray ends up getting his hand chopped off. JJ knocks down the pillar, cheating the family’s way into the next room. The final Escape Room challenge is to dunk a basketball. Jimmy tries and fails, at which point a trap door opens and Jimmy falls to his doom. A poisonous gas starts to fill the room at which point Maya says she wishes Kenneth were here to dunk for them. Aha! Kenneth walks from behind a secret panel as he explains the Escape Room was his extravagant way of teaching the DiMeos a lesson. He wanted to be included in their outing. Maya apologizes and Kenneth agrees to dunk for them before they all die from the poisonous gas he released. He misses. Ray wakes up.

When Kenneth realizes he has been feeding trick or treaters the old candy, he opens the front door to find zombie children attacking the house. Jimmy and Maya eat a piece of candy and start to come after Kenneth. Kiss me they say. Hilariously awkward. Kenneth wakes up in his hot tub and chalks the whole thing to his “hot tub nap.” Kenneth and his hot tub is all we need to know. It appears he spends most of his time away from the DiMeos, in his hot tub. Alas, we have learned something new about Kenneth. He has a profound love for Michael Jackson. His Halloween outfits were spot on even from the skin tone! It was amazing. I wish we had more of that showcased on the show. Kenneth rocked every single one! It was hilarious and fantastic. I hope ABC gives us more of that.

This Halloween episode started off rocky but ended up being awesome. The scares, the costumes, and the use of candy were all on it. Way to go Speechless, your holiday episodes continue their comical antics.