For those of you who have not been blessed by the film Spider-Man: Homecoming and may still be on the fence, go read my article about why you should see it, then go see it, and then come back and read this to debrief! I get more in-depth, but remain just as spoiler-free.

For those who didn’t or won’t follow my instruction above, here is a recap: Spider-Man: Homecoming (#SpiderManHomecoming) is the newest iteration of your friendly, masked, teenage, neighborhood superhero, Spider-Man. In this version, Queens, New York resident Peter Parker is an ordinary high school student, with brains, and a huge crush on Liz Allen. He lives with his Aunt May after his uncle is killed, and gets bitten by a spider, giving him heightened senses, strength, and web-slinging abilities.

We don’t start this film with a spider bite, and we don’t see the impact his uncle’s death has on his character, but what we see is an ordinary boy coming fresh off an extraordinary trip (Captain America: Civil War), trying to juggle his daily life and his newfound superhero status. While some liked that they didn’t do the typical spider bite (I have had this debate with several people in my circle of film critics), I for one, would’ve loved to see a flashback of sorts (45 seconds or less, nothing too crazy) just briefly addressing it. At one point, a key figure close to Peter asks for specifics and he gives him the briefest rundown in history, which for me was not enough. To be fair, this is one of very few criticisms of mine, seeing as it was overall a dynamic piece of art.

Hailing as hands down my favorite film in any Spider-Man revival thus far, Holland knocks it out of the park, striking a perfect balance between awkward, bright, and eager high schooler Peter Parker, and as newly minted, Spider-Man, still figuring out superhero-dom. For me, Peter Parker has always had the smarts of Tony Stark with the heart and do right conscious of Steve Rogers, and I think Tom Holland captures this blend brilliantly. He and this version in particular are why most of us relate so effortlessly to this masked crusader. He has normal problems, not just the weight of the world; he struggles with what is right and heroism in day-to-day life, all while trying to figure out the complexities of high school and figuring who he is and the type of person he wants to be.

Peter is surrounded by his best friend Ned (portrayed by Jacob Batalon, who infectiously steals the show with the perfect blend of wit and intellect), intelligent go-getter crush Liz (portrayed by Laura Harrier, who is a delight on-screen and off), brooding, bright, and comedic classmate Michelle (portrayed by Zendaya who provides some of the best comic relief and should be utilized more in this franchise going forward), and the high school bully you love to hate, who is obviously jealous of Peter (portrayed by Tony Revolori). This high school crew rounds out this fresh film well and provides an on-screen bond reminiscent of actual high school students, giving a nod to the John Hughes golden age films we saw in The Breakfast Club and Ferris Bueller’s Day Off. This crew shines so brightly that you cannot help but hope to see more of them in this franchise and beyond. You leave the film knowing that they will continue to be bright stars, but even better human beings in this industry. 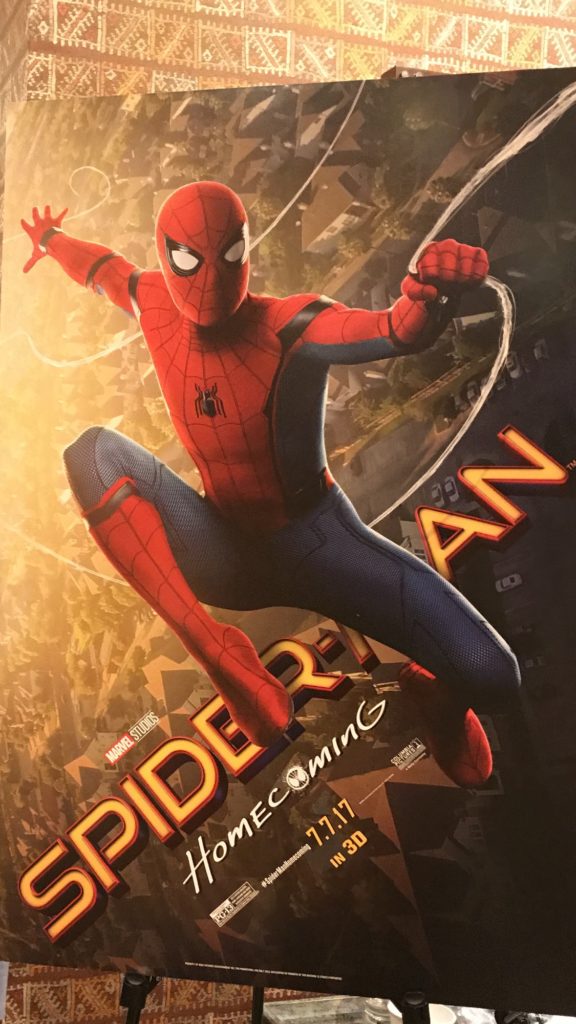 Highlighted strongly elsewhere in this film, is the mentor/mentee relationship between Tony Stark (Robert Downey Jr.) and Peter via the “Stark Internship,” as they affectionately call their secret crime fighting to hide it from Aunt May (Marisa Tomei) and everyone else. While you can see that Peter is trying to keep his secret identity under wraps — he starts off really strong, but then the first person finds out (although it’s not his fault that his cover was blown) — he then does a rather mediocre job after that containing his anonymity and hiding his face!

Which, as an aside, leads me to state, that we need to also find a better way for him to get into his Spidey suit, can’t just have him changing any and everywhere!

Back to the mentorship, it is here that we see a side of Tony as a Father figure type to Peter. Tony — still a bit self-absorbed, even in his superhero quests — meets Peter and immediately becomes someone that Peter aspires to be. With Peter’s uncle’s death serving as one of the catalysts in his life spurring him to want to see more justice in the world, Tony steps in at the right moment, with Peter eager for direction, mentorship, and approval. Tony initially views Peter as an extraordinary superhero, almost forgetting his age and lack of real world experience and knowledge prior to the events of Captain America: Civil War. Peter teaches Tony how to be a bit more forgiving, how to be patient, how to care selflessly for another human being outside of himself and Pepper. Through Peter, I think Tony starts to see the world through a different lens, and while teaching Peter a tough lesson on the responsibility of being a superhero, he gains a little more compassion and heart for the teen. I think they both learn and grow and become better versions of themselves through this unofficial mentor/mentee, father/son, brotherly relationship.

Let’s talk villains! Vulture (Michael Keaton) is a complex character who isn’t just a criminal for the sake of world domination so to speak, but to be a good provider and upstanding husband and father. Vulture emerges as a blue-collar worker who happens to find some Chitauri tech with his crew (on a top-secret salvaging job at the Avengers former headquarters none the less), that changes their lives. His salvaging team includes a pretty ambitious tech engineer, who takes this tech and makes weapons to sell on the black market.

While Vulture himself needs anger management courses, Keaton actually does the role a great justice, striking the right note between sleazy criminal and overly protective and doting family man. My favorite scene is a car scene that quite frankly best utilizes Keaton in this role. It is a part of a twist that I honestly saw coming, but to other filmgoers, including people I got to debrief with after the screening, they were genuinely surprised! While I will stay relatively mum, I will say that for me, this twist was the only natural way for Vulture to come to head with Spider-Man, which is how and why I figured it out to begin with. I will say, I could watch Keaton on-screen all the time, and while I had hoped that the content would’ve gone a little deeper into his character and given him the opportunity to show more range, my hope is that this isn’t the last we see of him in the Marvel Cinematic Universe.

While it does have some challenges and I would like to see certain aspects fleshed out in the films to come (coughs give me more of Aunt May and Peter! Let’s do a flashback of his uncle’s death and how they’ve built their bond thus far), but overall Spider-man: Homecoming is a fresh new take on Spidey that everyone needs to go see!

Bibi G. (aka Kay-B) is Contributor and Podcaster on Black Girl Nerds and writer on Just About Write reviewing TV and film.