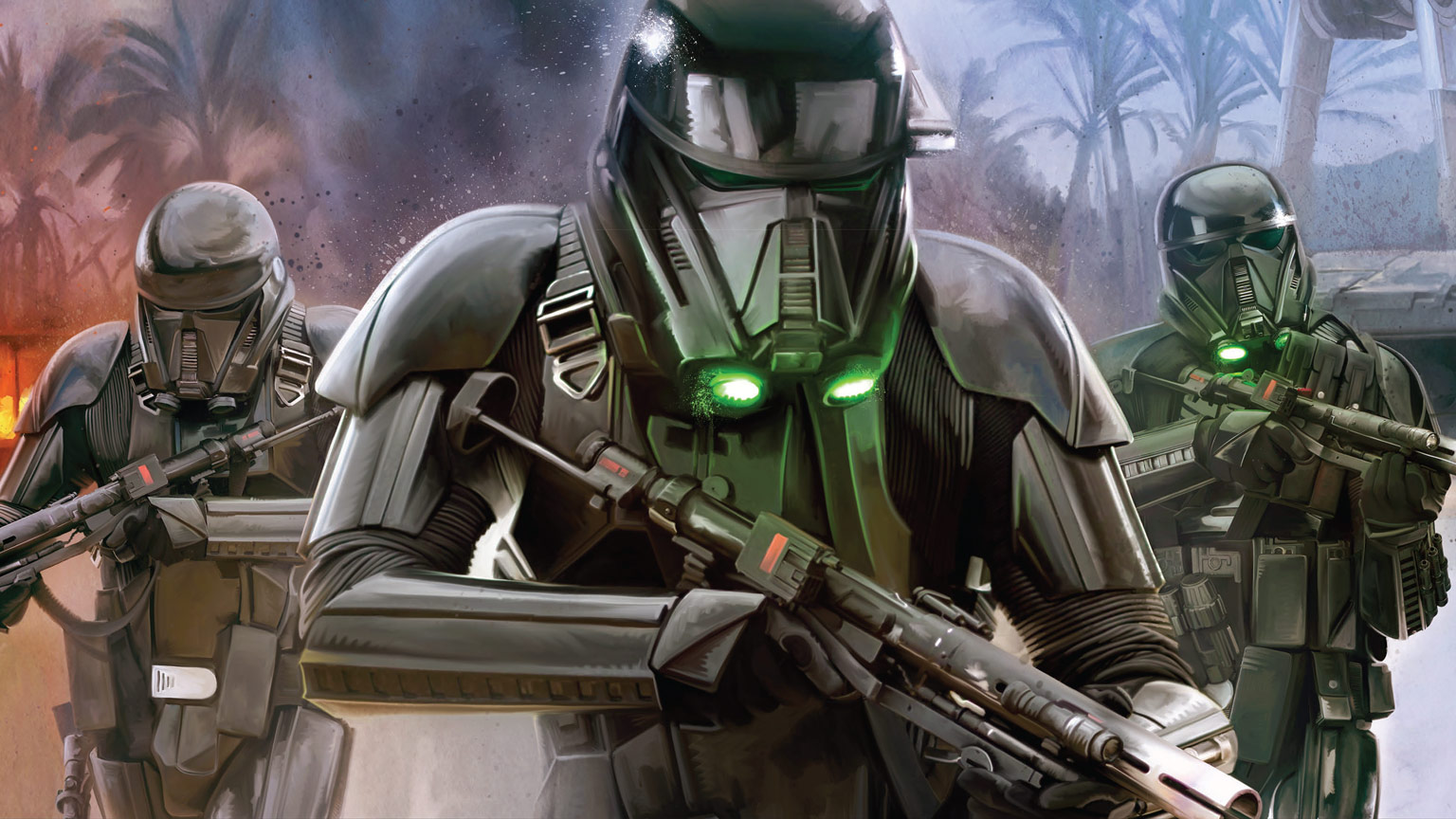 Thanks to Titan Books, I had the opportunity to receive a copy of the new book Star Wars On – The Front Lines by Daniel Wallace. This hardcover book is an exploration of some of the most defining battles in the Star Wars universe.

I also had the opportunity to ask Daniel some questions about the book and his fandom. At the end of the interview, I share my thoughts on the book.

Black Girl Nerds: What is your personal Star Wars story?

Daniel Wallace: I’m a lifelong lover of Star Wars, and after reigniting my fandom by connecting with other like-minded folks during the early days of the internet—I’m talking early ‘90s dial-up message boards here—I made some lucky connections at Lucasfilm that led to a successful publishing tryout. My first Star Wars book was The Essential Guide to Planets and Moons in 1998. Since then I’ve worked on dozens of Star Wars books, with a particular emphasis on nonfiction that explores various aspects of how this universe works.

On the Front Lines is the latest. It focuses on the important battles that have occurred throughout the saga, starting with the Battle of Naboo and running through the Battle of Starkiller Base. 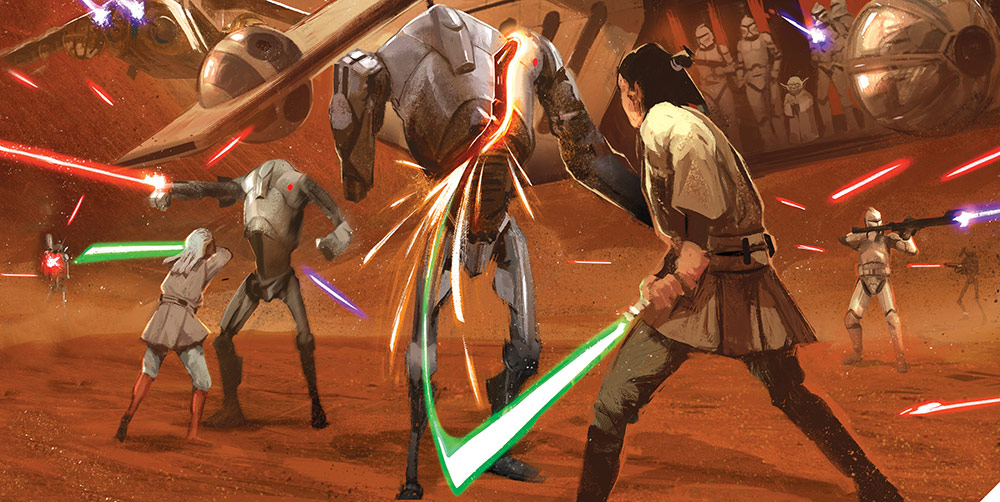 BGNs: Were there any challenges with this book since it is an “in universe read”?

DW: Writing nonfiction like it’s taking place “in universe” is one of my favorite things! In 2010 I wrote The Jedi Path, which was packaged to look as if it was an old textbook that had been issued to young Padawans in the Jedi Temple on Coruscant. That meant that every fact needed to be conveyed using the proper voice. I later used that approach on similar books including 2012’s Book of Sith and this year’s The Rebel Files, which is coming in November.

On the Front Lines is written as if a Star Wars historian is chronicling the facts, but because it’s essentially a history book, the writer tries to take a larger view of the events without personal bias. On the other hand, the book is filled with sidebars that give a voice to overlooked or all-new characters. These “I Was There” stories [are] told in first-person and provide unique takes on familiar events.

BGNs: What was your major source of research material?

DW: The films, mostly, plus the animated series The Clone Wars. That’s eight movies (the seven numbered episodes, plus Rogue One) and dozens of animated episodes which gave us plenty of material to draw upon.

The only battle in On the Front Lines that is never actually seen on a movie or TV screen is the Battle of Jakku—the conflict that led to all those crashed Star Destroyers littering the deserts of Rey’s homeworld. Here, the most useful sources were the books Lost Stars by Claudia Gray, Empire’s End by Chuck Wendig, and the video game Star Wars Battlefront. 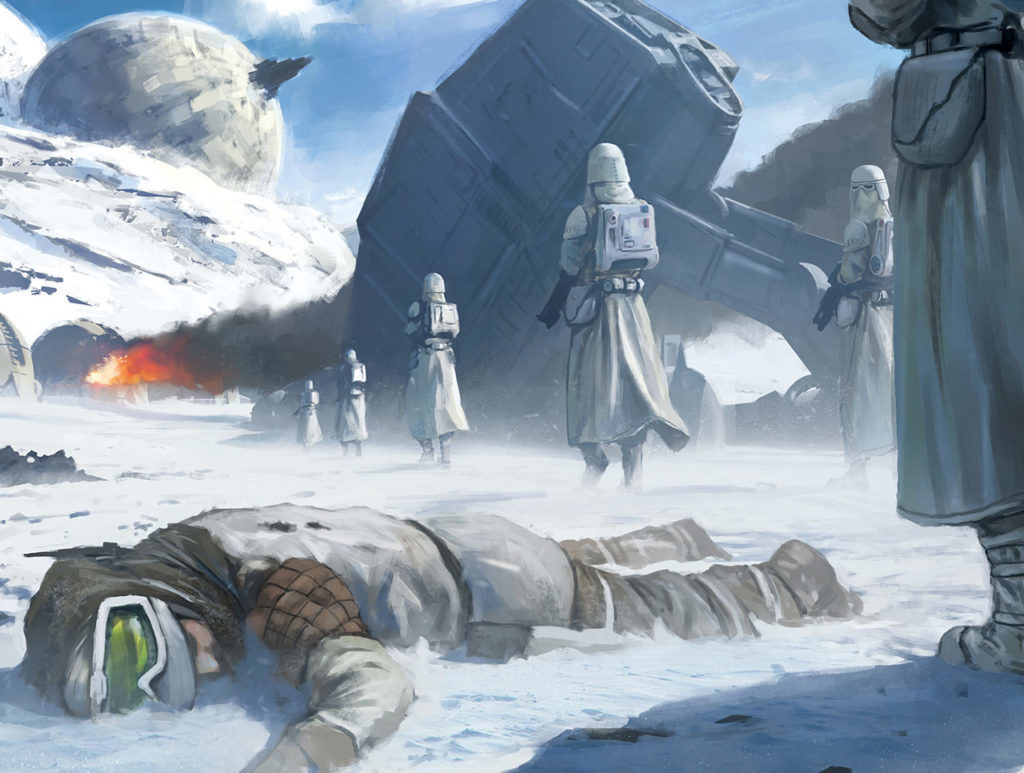 BGNs: What is the core experience you would like readers to take away from this book?

DW: When it comes to Star Wars, battles are a huge part of the saga—they’re the “star wars” in the name! So while On the Front Lines offers a military-centric view of the Star Wars story, it’s ultimately more interested in the people than the hardware.

To expand on that point, one thing we really wanted to stress in On the Front Lines is the POV of everyday soldiers. For example, while Luke Skywalker is mentioned in this book, it’s only for his role as an X-wing pilot attached to Red Squadron. Instead, much more of the book is spent getting to know more obscure, front-line characters like Echo Base Trooper Chanda Bethari, Gungan conscript Omo Prumba, and Jess “Testor” Pava, aka Blue Three from The Force Awakens.

This book is a visual and tactile delight! It’s an oversize hardcover that works perfectly as a coffee table book.

The book is also very solidly made which allows it to be opened easily so readers can immerse themselves in pages comfortably.

Instead of film stills from the movies, the book uses illustrations to break down the people, places and equipment from each battle.

Part One of the book focuses on The Clone Wars and focuses on major battles of the era including the Battle of Naboo.

Part Two covers The Galactic Civil War time period. It’s here the events from Rogue One are folded neatly into the battles we know very well : Yavin, Hoth, Endor. There is even a tie-in to the Aftermath series with the Battle of Jakku.

My favorite parts in this book were the Commander Profiles. For each battle there are two illustrations showing the commanders from opposing sides. Like for the Battle of Ryloth where Master Mace Windu was the Jedi leader while Emir Wat Tambor led the Separatists.

I also enjoyed the “I Was There” stories which included stories from Wedge Antilles, Bail Organa and Nien Nunb.

Overall, the book is a really nice volume. I especially liked how the stories came together. It’s a great book for a Star Wars fan’s shelf!