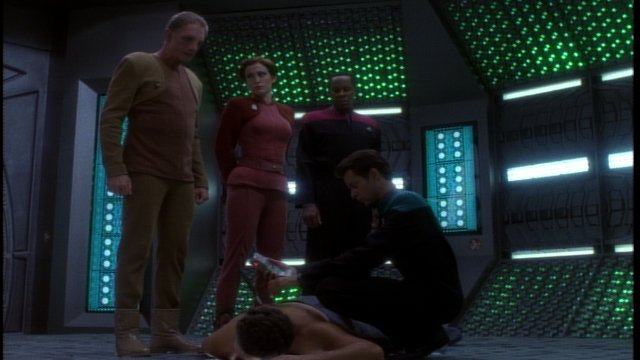 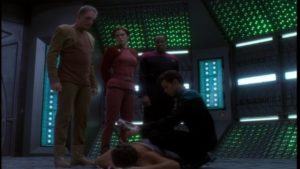 The second episode of DS9 has a different feel to it. The crew is not on a starship galivanting across the universe in close quarters. Instead, they are stationary and there is more opportunity to move and explore the space. Also, DS9 is the first in the Star Trek franchise to have a substantive non-Starfleet presence as evidenced by the inclusion of Major Kira (Bajoran Provisional Government), Odo (Station Security Chief), and Quark (Local proprietor). Now the process begins to develop this world and the characters in it. On the surface, “A Man Alone” finds Odo the prime suspect in a murder investigation of a Bajoran man name Ibudan. It is established early that Ibudan is an opportunistic snake who made himself rich by exploiting his fellow Bajorans. Odo is suddenly on the outs and his “otherness” as a shapeshifter is brought to the fore.

There are several themes explored in this episode. 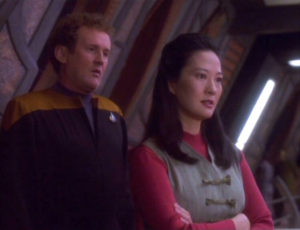 It was interesting to see how Miles attempts to satisfy his wife by recommending pet projects to keep her busy.

My first thought was boy, bye!

Keiko is a botanist not some interior decorator who is going to spruce up the station with plants. But, he did make up for it by suggesting his wife could sign up for short missions into the wormhole (seems we forgot about that in this episode) and collect specimens for study. He was willing to make it work but she shut that down.

Admittedly, I chaffed at the fact Keiko decided to go into teaching. Teaching is a noble profession and I have nothing against it. I was just surprised how quickly Keiko dispensed with being a botanist in favor of this new profession. I felt this was wrapped up a little too easily and by placing her in what is typically a traditional female profession. 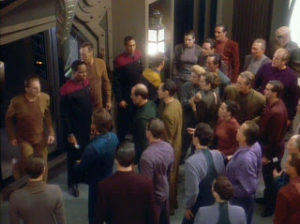 I would be remiss if I did not touch on the “othering” of Odo. He is a shapeshifter and the only one of his kind on the station. We do learn more about his species in that he must regenerate for several hours a day by returning to a liquid state. As Mr. Spock would say, fascinating. Unfortunately, that makes him a prime target for the fearful and hateful. It was interesting to see Sisko come to Odo’s aid. Not only as Commander of the station but as a black man given the history of the United States. The crowd was only a half a step away from turning into a lynch mob. This was alluded to by the head Bajoran goon looking to the crowd and agreeing with Sisko’s command to disperse. The Bajoran man turns to the crowd and says,

He’s right. How do you get a noose around a shapeshifter’s neck?

He smiled and I shuddered. Hate plus a mob mentality can lead to a deadly situation. A fight breaks out but it’s quickly over. Sisko makes it clear that Starfleet is not here to play.

At the same time, the othering of Odo reveals another side to Bajorans. In the pilot episode, they are presented as a people who have enduring occupation (aka colonialism) at the hands of the Cardassians that exploited them. At the same time, it’s briefly mentioned that there are factions within the Bajorans.

In “A Man Alone”, it’s evident that the Bajorans can go from victim to aggressor, especially when their target is different than them. Even in these two episodes, I like how DS9 is presenting more shades of grey.

So the dead Ibudan, it turns out, isn’t dead. Apparently, he held such a grudge against Odo that he learned about cloning, cloned himself, killed his clone, and made it look like Odo did it. The crew only learned this because Bashir collected samples from Ibudan’s quarters and grew a whole clone in the lab.

Did you catch all that? That’s about how fast that whole plot point went on the show. The real Ibudan ends up getting caught by Odo and sent to jail for killing his clone. During a voice over at the end, Sisko reports that the clone woke up and is living life now. Wait what? To quote, Kelly Kapoor from The Office: 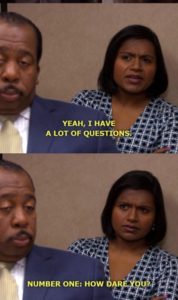 Thanks for reading. Next time, we’ll explore Episode Three: Past Prologue

Star Trek Redux is a bi-monthly examination of the themes, messages, and morals of the Star Trek Universe.