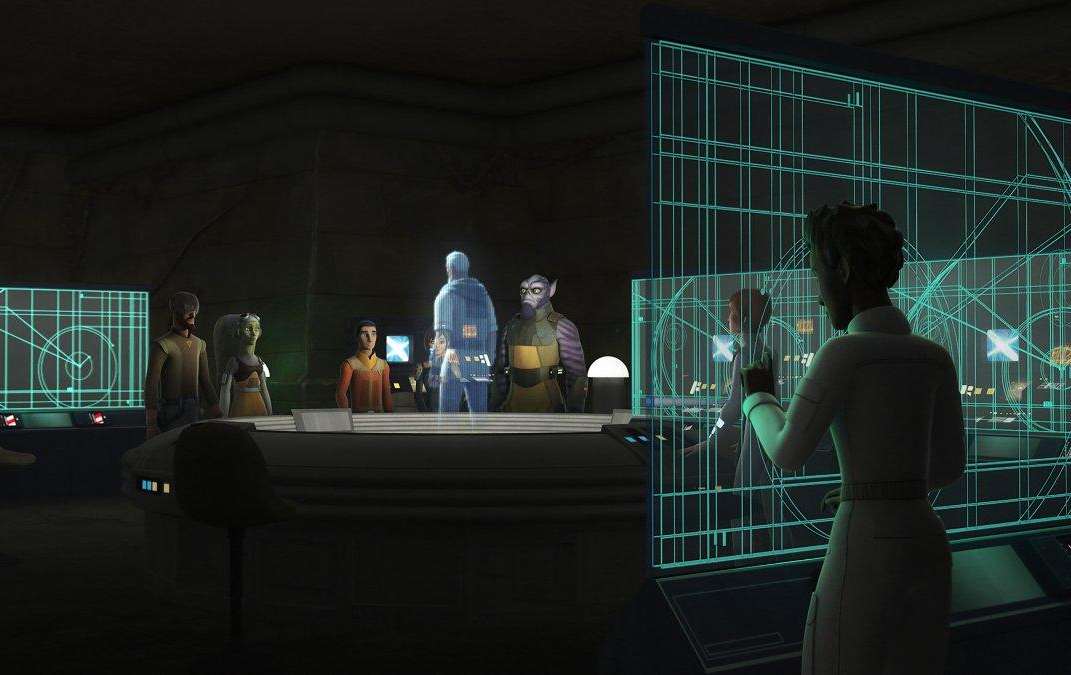 As he proves in this week’s Star Wars Rebels, Lothal has never been far from Ezra’s mind. If anything Saw’s conversation about losing his homeworld in the last episode increased Ezra’s need to save his. The episode opens with Ezra having a nightmare about Lothal in trouble. Kanan attributes it to anxiety but it turns out to be a prophetic dream.

After landing at the Yavin base, they are immediately summoned to a meeting with Mon Mothma. She received a transmission from Ryder Azadi, the leader of the Lothal rebel cell, about a new TIE ship being developed there. The transmission cut off before he could give any more details. The crew of the Ghost volunteers to go to Lothal to get the intelligence. Because of the heavy Imperial blockade, they have to get in through a smuggler and Mon Mothma makes them aware that Alliance won’t be able to pull them out.

We get a reversal of the beginning of the season. Instead of going to Sabine’s home planet, now they’re at Ezra’s. Both planets reveal the horror of Imperial control. Lothal is now a planet on fire. Smoke fills the landscape. Stormtroopers patrol the streets enforcing a curfew for the citizens. Reminiscent of Nazi-occupied cities, troopers harass citizens for their identification. The connection between the Empire and Nazi Germany has always been there but it was especially driven home this episode as Ezra traveled through his changed homeworld.

The final betrayal is finding out that Old Jho’s Pit Stop, a former safe haven for rebels, is now under Imperial control with Old Jho executed after being found helping the rebels. Ezra is wracked with guilt over leaving. While he was out having adventures, his home was systematically being destroyed. A part of him feels like he could have changed something by staying.

The group is split. Sabine, Ezra, and Chopper go on a mission to find information on Ryder leaving Kanan, Hera, and Zeb to search for transportation. This leads to a sweet moment between Kanan and Hera. “I wish I could see you,” he says. “You could always see me,” she replies as she takes off his glasses. They lean in for a kiss but are interrupted by Zeb who has found a transport they can take. Hera and Kanan’s relationship has been in a nebulous place between existing and not existing. Here’s hoping they move more towards the former before the end of the series.

They get their transport but as they’re picking up the rest of the group, they’re attacked by stormtroopers. Thanks to Jai Kell, a former Imperial Academy cadet who earlier helped Ezra and Sabine get out of the cantina, they’re saved. He leads them through sewer tunnels that should take them out of town. Unfortunately, they’re still pursued by Imperial probes and stormtroopers. They decide to split up again. What’s with all the splitting up? They eventually converge in the same area after following Sabine’s symbol in the tunnels. They climb up a tunnel and find Ryder.

Episode 5, “The Occupation,” is mostly set up for episode 6, “Flight of the Defender,” which begins with the Ezra, Sabine, Ryder, Zeb and random adorable loth-cats surveilling the Imperial base that the new TIE fighter is stationed at. With no chance of backup, they can’t chance destroying it. Instead, they can get as much intelligence on it as possible and send it back to the Alliance. The new ship has 3 fins and is faster than anything they have to throw against it. Rather than only using their distant photos and video, Sabine suggests they steal the flight recorder.

Sabine and Ezra sneak onto the landing field. They have a distraction in the form of loth-cats attacking the stormtroopers guarding the ship. Sabine makes her way onto the ship to take the flight data. Meanwhile, a ship lands at the base and none other than Grand Admiral Thrawn walks down the ramp increasing the danger.

We’ve had a lot of Sabine and Ezra working together this season. Their plans tend to be more improvisational and end in explosions. For instance rather than taking the flight recorder, Sabine opts to steal the entire ship after finding out it is equipped with a hyperdrive. They can use the ship to fly back to Yavin. They just have to destroy the transponder first. She picks up Ezra and fires on the landing field.

Ever calm in a chaotic situation, Thrawn uses the opportunity to see the ship in action against the interceptors sent against it. While Sabine works to deactivate the transponder, Ezra tries his best to defend against them. Knowing how they used her it’s even more satisfying to see Sabine continue to use her skills against the Empire. After she succeeds in deactivating the transponder, Thrawn orders the kill switch on the ship to be activated. Two of the fins immediately fall off causing the ship to crash land.

Sabine suggests they take the hyperdrive to power Ryder’s u-wing. It’s bulky and large. In addition to the flight recorder, it’s slowing them down in an area that will soon be crawling with Imperial troops. That’s when Ezra sees a white loth-cat. He follows it into a cave where they hide the hyperdrive.

In the last episode, they mixed bits of Jedi mysticism in the middle of the action with Ezra hearing the singing of the kyber crystal. In this episode, they ramp that mysticism up with the mysterious white loth-cat that only Ezra can see and later the loth-wolf, a creature that is almost a myth on Lothal. Ezra saw him at the Imperial base and he sees him again as he looms over Sabine. “Sleep,” he growls at her causing her to slump over. The white loth-cat is with the wolf further hinting at some kind of Jedi connection. The wolf takes them to where their group is hiding. Just before he leaves, he says one word to Ezra, “Dume.” Kanan’s real name is Caleb Dume. What is the wolf trying to tell Ezra?