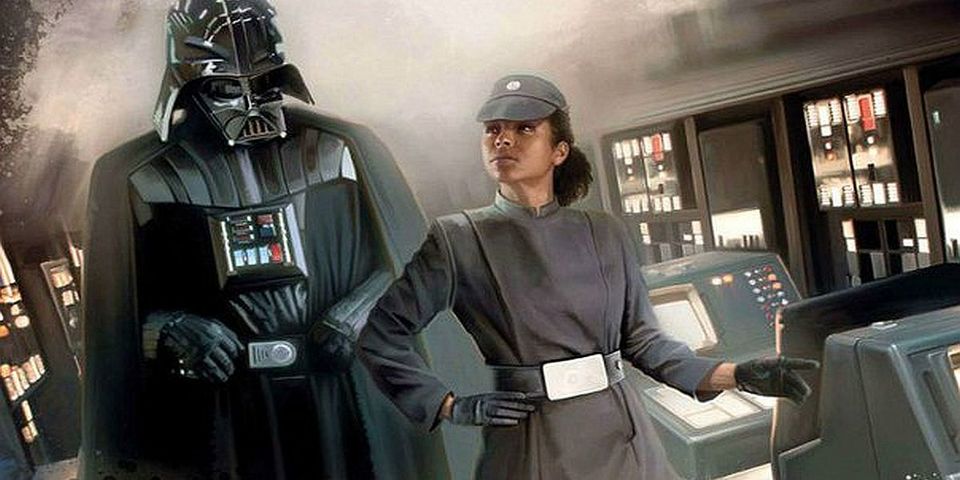 I love the new direction Star Wars is taking with The Force Awakens and now Rogue One: A Star Wars Story. I even support the fact that Rogue One is rumored to be the first Star Wars film not to begin with the classic Star Wars preamble crawl. Rogue One is also running with the diverse platform The Force Awakens started, featuring a woman as the main character (Felicity Jones) and a main ensemble cast featuring Forrest Whitaker, Riz Ahmed, Diego Luna, Donnie Yen, Fares Fares, Jimmy Smits, James Earl Jones (as the voice of Darth Vader, of course), and Genevieve O’Reilly.

But for the most part, Star Wars has only been killing it when it comes to white women and men of color. Once again, it’s time to ask the age-old question: What about the black women?

In the latest Rogue One trailer, this lovely lady makes an appearance:

But do we get to learn more about her? I already want to know the rest of her story and who she is in the resistance.

What’s the worst part of this erasure is that it’s not like Star Wars hasn’t prominently featured black women before? It’s just that the women are usually in the written tales of the franchise. For instance, Imperial naval officer Rae Sloane, who appears in various Star Wars books, her first appearance being A New Dawn.

But Disney and Lucasfilm might not have taken a prime opportunity to cast Sana or any other woman of color as Han Solo’s opposite in the upcoming Han Solo spinoff film. Emilia Clarke is set to play a prominent role in the Han Solo film, a role that Tessa Thompson, Zoe Kravitz, and Adria Arjona (Guatemalan/Puerto Rican) might have auditioned for. According to The Hollywood Reporter, it’s currently unclear if Clarke’s role is the same role the other actresses tried out for if the film will feature multiple women. As it stands right now, though, Clarke’s is the only name we’ve heard since the news of Alden Ehrenreich and Donald Glover landing the Han Solo and Lando Calrissian roles, respectively. That doesn’t bode well for black female Star Wars fans who have been waiting to see themselves represented in a big way in what’s supposed to be a highly diverse intergalactic universe.

Also, something that’s annoyed many a black woman fan—the fact that the one black woman we do have in the new Star Wars universe, Lupita Nyong’o, is playing Maz Kanata, a character that is completely CGI. (A similar annoyance with black men in sci-fi can be read about in this companion article concerning Idris Elba’s role in Star Trek Beyond.)

Another strike against Lucasfilm and the Star Wars universe is how often black women and other women of color are often cast as Twi’leks, whose women are often enslaved as sex objects. To quote Wookipedia:

“Since female Twi’leks were regarded as graceful and beautiful beings, many of them were forced into a life of slavery at the hands of the galaxy’s wealthy and powerful.”

It’s more than a little disturbing that while women of color are all but absent in the Star Wars universe, they are readily cast as women who are sold into a sexual slavery.

It’s even more disturbing that Oola, the only sex slave coded as a black woman due to the actress, gets killed moments after we see her on screen in Return of the Jedi. There could have been a better outcome for her instead of just being used as disposable eye-candy.

This isn’t to disparage against these actresses since I like all of them. But I’m trying to prove a point. Star Wars has a predilection, a tradition, in fact, of casting brunettes, when brunettes don’t signify all of the woman-kind. If Star Wars is going to be the franchise that puts women first, it’s got to put all women first. Black women and women of color, in general, have been historically forced to identify with women who do not look like us or experience life like us. You’d think that in a galaxy far far away, it’d be all too easy to find women of color and not just women of color who happen to be sex slaves. In a way, Star Wars reiterates a fact of life that has been apparent to many women of color; we’re usually more palatable heard and not seen, and if we are seen, then we have to be as vampy and erotic as possible to matter. That’s not the kind of message Star Wars needs to bring into something as uplifting and inspiring as a sci-fi space opera that preaches equality for all people.

Am I still going to see Rogue One? Of course. Supporting it means I’m supporting the actors of color who are prominently featured. But my dollars will hopefully act as a means for Star Wars to increase their focus on diversity. Hopefully, this will mean that someday soon, we’ll finally have a sistah in space.