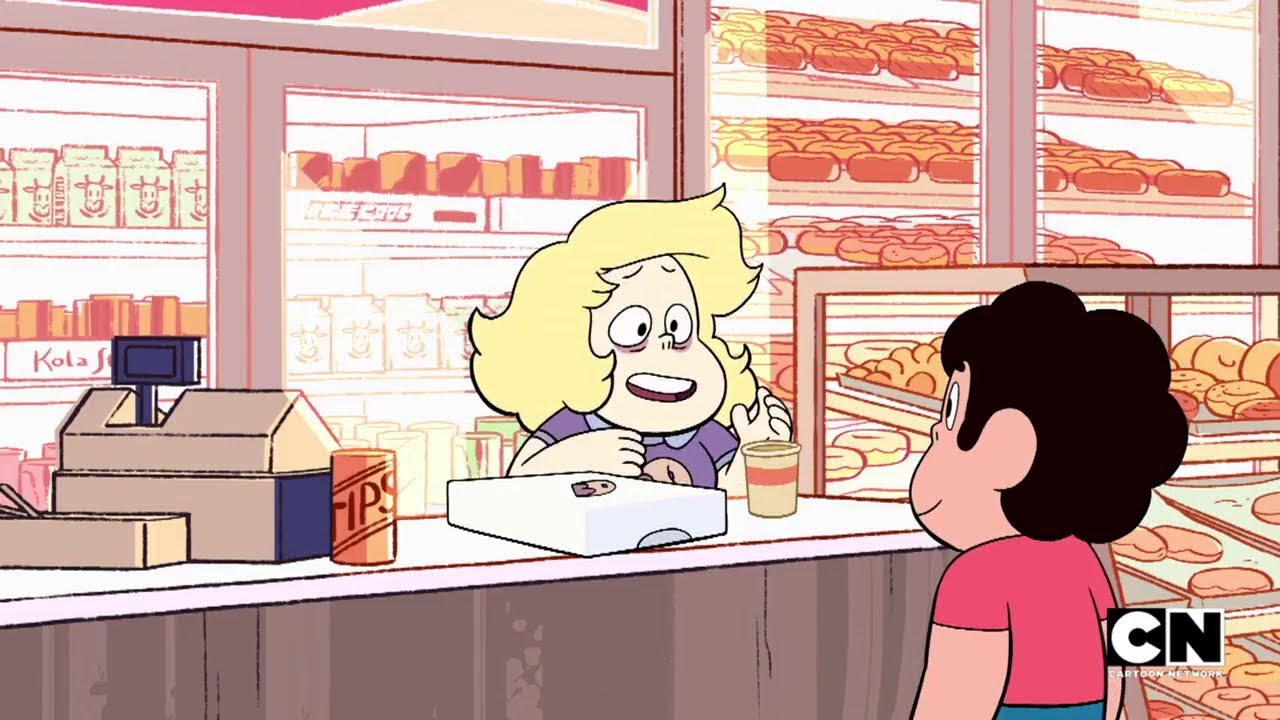 If there’s anybody who needs some #2018Affirmations right now, it’s Sadie Miller. That girl needs some changes in her life, and thankfully this episode of Steven Universe finally addresses it.

The episode starts off with Sadie exhaustedly manning the fort at the Big Donut. Ever since Lars has been stuck in space, she’s been handling the workload of two employees, because apparently, no one thought to hire someone new after his disappearance? Regardless, she’s slaving away when Steven shows up to order donuts for his new band with town cool kids Jenny, Buck, and Sour Cream. Steven notices how downtrodden she looks and asks her if she’s okay; she talks about how much she misses Lars and how it was nice having him around to talk to, even if he never did any work while they were together. (Man, I hate Lars.)

Steven heads to band practice where Buck tells them he’s got them a gig, even though they just started the band and don’t have a sound yet, let alone a name. They spend the rest of practice experimenting with sounds that don’t seem to work and as they’re wrapping it up, Sadie comes running up. She wanted to see them practice but couldn’t make it out to work in time. Her sadness and frustration with her situation resonates with everyone, and the next day they show up at her house with their band equipment to give her a private show. (It’s incredibly sweet, especially for someone like Sadie who doesn’t have a lot of people in her life to do things like that for her.)

It’s at her house, while watching classic horror films on her bed, that they finally get the inspiration for their sound. They sample the music in the film and get Sadie to sing for them, where she really lets loose and sings out the frustration of her menial job and her overwhelming loneliness. Sadie’s really shining here, in a way she doesn’t really get to do. They stare at her in awe as she finishes the song and beg her to join the band before their upcoming gig, but she won’t do it.

The next day, Steven comes to visit her while she’s at work to ask her help writing new songs, then asks her again if she’d think about coming to the upcoming gig. She responds “I’m the only employee at the stop, remember? I can’t just leave.” (Seriously, why haven’t they hired more people? I think some labor laws are being broken in Beach City, y’all.) She proceeds to confide in him that she doesn’t try to make positive changes in her life because all the crappy stuff, although crappy, is at least familiar and “normal” to her. As she puts it, “you ever feel so bad that you feel good?” RED FLAG by the way, and when Steven repeats what she just said to him she finally starts to hear it. Which is why, when Steven and the band start to drive off to their gig, Sadie appears out of nowhere, informs them she finally quit her job and is ready to become Sadie Killer, rock star!

Now, I’m not one to applaud someone quitting their job because they joined a band. But my girl Sadie needed something drastic to shake her life up. Her reasons for her apathy toward her own unhappiness explains a lot about her (like letting Lars treat her like she’s worthless — fuck you Lars) and also, it just makes me really sad, you guys. But now she’s finally taking control of her life and I, for one, am here for it!

Steven: “We’ve been trying to write some more spooky songs without you, but they sound so phony coming from me….you got any tips?”

Sadie: “Let’s see. First, lose your youth to your boring job. Then lose the only person you’ve ever felt truly close to. And then, lose your mind working all his shifts.”

Steven: “…I don’t think I can do all that before the show tomorrow.”