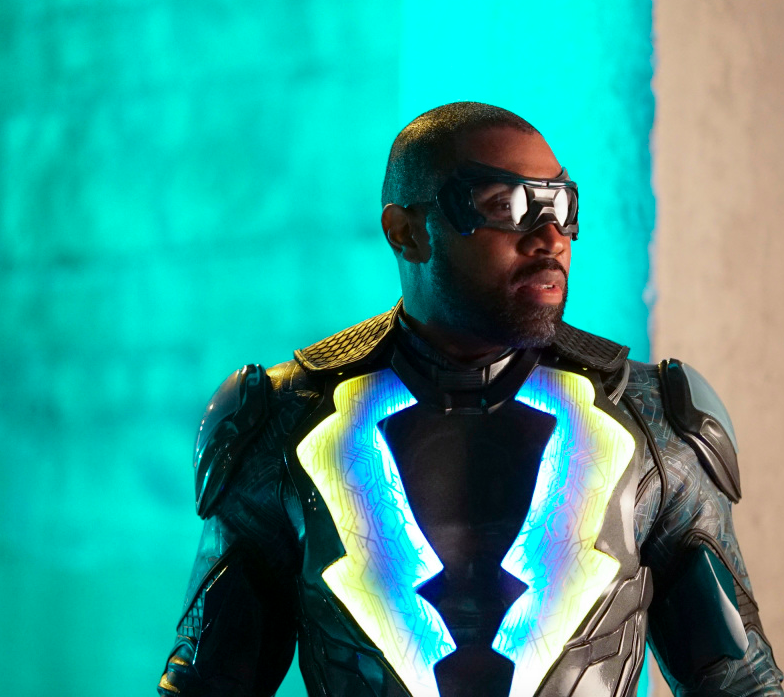 So now that we have all returned from our vacation to Wakanda, we are surrounded by the reality that is America. This return includes all the concerns and issues of the day.  While others are protecting New York, a hero returns to address the modern wrongs.  Created by Tony Isabella in 1977 for DC, the comic book Black Lightning originally was a crime-fighting educator in Metropolis.  In the television canon, Jefferson Pierce, is a high-school principal, working every day to educate, encourage, and protect his students and his family in the fictional city of Freeland.  An unfortunate decision by his younger daughter Jennifer results in her path crossing with a lieutenant from the local gang known as the One Hundred.  The gang kidnaps Jennifer and her older sister Anissa. This forces Black Lightning to return ostensibly just this once to save his daughters.  The title role is played by Cress Williams, and BGN got the opportunity to ask him a few questions in between signings at Awesomecon this year in Washington, DC. 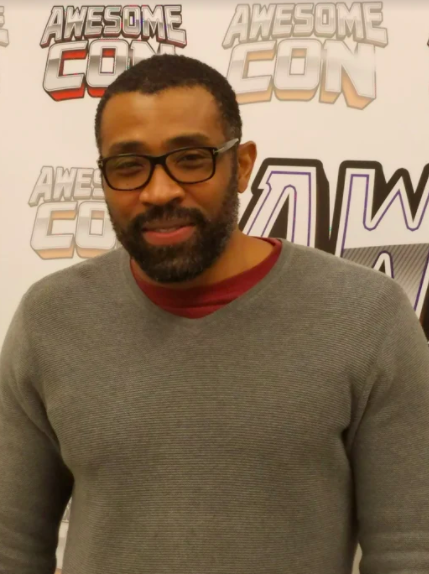 BGN: It looks like you earned your sci-fi cred debuting a certain species in the Star Trek universe. Tell us about Talak’talan.

BGN: What was it like, the makeup and everything?

Cress Williams: Yeah, it was. Interesting. The process of getting in makeup, they make a cast of your face. I thought it was like, “Are you going to be okay with it?” Because some people get claustrophobic about the whole process, but it was actually completely relaxing. I fell asleep.

The makeup process as far as getting ready was challenging because you had to get there. I think it was probably like three or four in the morning to start the whole process to get it on, and I had to be clean shaven every single day.

BGN: At the beginning of the year, the CW released the first episode of Black Lightning, but your involvement started several years before that. What kind of prep work did you have to do to get in character?

Cress Williams: Fortunately, I’m a huge fan of superheroes. I’ve been for years now working out on a pretty regular basis, so physically that wasn’t a shock to my system, but I did have to learn a lot about the fighting style. I know boxing. I know that style, but the martial arts style, my stunt double, Eric, is a great teacher, and I’ve trained with him. Then the rest of it thankfully is just being a father, and I am a father, so I just live my life.

BGN: Were you familiar with Black Lightning before working on the show?

Cress Williams: I wasn’t honestly because he hasn’t gotten a lot of love over the years. I always say I was too poor to afford comics, so I usually watched cartoons on television, which he didn’t show. But I quickly got into it, and the style of writing, not only from the comic, but our show, I think it’s being rooted in real life and a superhero who’s trying not necessarily to save the world, but save his community and his neighborhood is what really got me.

BGN: In the series, Jefferson is a high school principal. His wife is a neurosurgeon. His eldest daughter is in med school, and the youngest is a scholar-athlete. Are the Pierces the new model of a nuclear family?

Cress Williams: Yeah, I hope so. I think they’re the model of education being the answer, and I think both with Pierce and Lynn as great parents, they strive for greatness. They strive for excellence with their children. What I love about them, is that they have this emphasis not on just grades, but also just being well-rounded human beings with all their kids. I think it’s a standard to live by.

BGN: Black Lightning covers various issues with communities of color. Just since January, the show has touched on issues related to social activism, police corruption, the importance of a secondary level education, and acceptance in the black community of homosexuality. Jefferson Pierce’s nemesis, Tobias Whale, is an albino. In your view, has the show’s treatment of these issues been well-received? 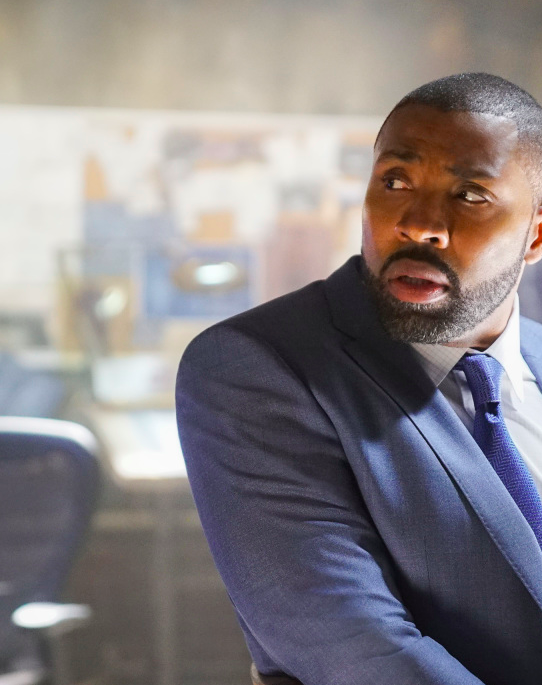 Cress Williams: I think people have been starving for it. The success of our show shows that people want more out of their fantasy superhero genre. I think for anything to sustain itself, it has to evolve, and so the next evolution was to go deeper and start dealing with real issues in these storylines.

I know from an artist’s standpoint, from a viewer’s standpoint, I love it. I’m happy to be a part of it, and I think people, that’s what I hear that people are really digging, is that we’re rooted in real life.

BGN: I guess a couple of episodes ago, there was a lot of commentary about your Black Panther [hoodie]. How did that come about?

Cress Williams: It was great. Our wardrobe lady got it, and it was the Black Panther hoodie, the food program, I believe it was, on the hoodie. She said, “Yeah, I got this, and I think it would be awesome if you wear it.” I was like, “Yes, let’s wear this.” She gave me one for Christmas to keep, so I have one of my own. It got such a great response and continues to get such a great response. It’s great to know that people still know and know their history.

BGN: What was it like the first time you saw yourself in the suit?

Cress Williams: I saw myself. When we probably put it all together, and I finally had the final fitting, there was a wall in front of me, and I was like, “I feel like I can run through this wall right now.” That’s how I really felt, and I was like, “Let’s go. I can deflect bullets and everything.” It was exciting.

BGN: I saw an advertisement of a Black Lightning statue. Is it odd to see yourself in toys and comic books and lunchboxes?

Cress Williams: It is. I’m still getting used to it. I want all the toys, and I want to create a Black Lightning room, but even today at Awesome Con as I’m signing pictures, you start to get desensitized. Then I look back, and I see my poster. I saw it in a fresh new light. I’m like, “Wow, this is crazy. That’s me up there. This is crazy.”

Cress Williams: Yeah, but in a great way. It’s something I’ve always wanted to happen. I’m a huge nerd myself. I’ve just finished my third time watching Battlestar Galactica. Honestly, as a kid I wasn’t watching the old series religiously. I would catch it here and there, but I didn’t watch it all the time. The newest one, I got the box set for Christmas. I’ve watched it when it was on the air, and I’ve been watching it like every time I work out. I still cried at the end. Still got me at the end.

BGN: Given the recent issues with various social media platforms has that affected how you use or consume social media?

Cress Williams: I guess on some level I’m new to social media. I was late to it years ago when I was doing Hart of Dixie, and at that time I was really only using it just to publicize it. As soon as that show ended, I got off of all social media. It didn’t come natural to me.

I was off of it for years until this show came back on. Having that time away from it, it allowed me to see that, okay, I should obviously use it as a platform for my show, but also to use it for something deeper than that. It brings awareness for me to issues that I’m not aware of, news that I’m not aware of. I’m not a big watcher of the 11 o’clock news because it depresses me, so social media is the way that I get it.

BGN: All right. Last question. What is your nerdiest habit or guilty pleasure?

Cress Williams: Okay, so my nerdiest habit is that my wife and I and a group of friends play Dungeons and Dragons. We used to play once a week when we all lived in the same state. Now, because we’re the only ones — we live in Atlanta, and they all still live in California, we play like once a month, but we still play.

BGN: What are you?

Cress Williams: As long as I can use some sort of magic. I’ve been sorcerers, rangers. I haven’t been a cleric or a thief yet.

Whether a sorcerer or superhero, Cress Williams appears as the genuine and good-hearted character he portrays. With a stellar cast around him let’s hope lightning strikes twice this year and another superhero of color captures and keeps the hearts and minds of the people.  Black Lightning can be seen on Tuesday nights on the CW network.