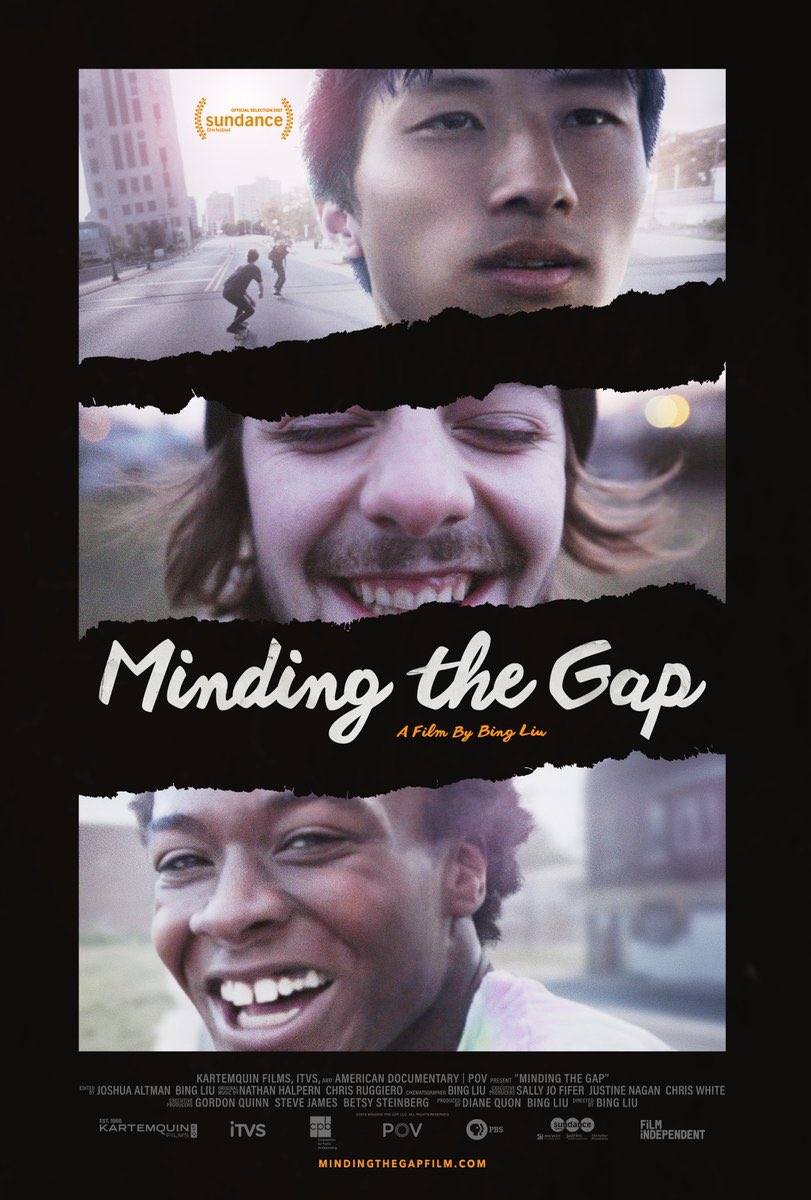 Skateboarding imagery is threaded throughout Minding the Gap, a documentary film directed by Bing Liu. The gliding motion is cut into the film almost every time someone talks about getting away or wanting to go away. Skating is also the metaphor, the crutch, the mother’s apron behind which these subjects hide when speaking of their pain, becoming the most stable thing about their lives.

It begins as a story of three friends—Bing, Keire, and Zach—drawn together by their love of skateboarding. The documentary winds through each boy’s life, using Liu’s amateur videos of their younger years like rough flashbacks while each boy narrates. We quickly find that they’ve slipped through several cracks, having been beaten, abandoned, and often forgotten by families too broke and preoccupied with their own business of living to bother. Although the boys are technically adults—with possibly the exception of Keire, who is 17 at the beginning of the film—it is obvious that these subjects have not finished growing up. When fatherhood comes calling for Zach, it’s too easy to feel as scared as the other characters are about the prospect. Imagine the idea of assuming a role when they haven’t even reconciled with their own fathers.

Although the documentary seems aimless at the start, taking a little longer than seems necessary to introduce the audience the subjects, it finds its footing quickly once the character backgrounds are complete. That’s when the documentary about three “lost” boys becomes a study in what makes a violent man. Liu’s process might appear sneaky, in that he allows the audience to fall in love with the boys, to begin rooting for them, only to later juxtapose the alleged abuser in the group, Zach, with the footage of Liu’s own mother. With tears streaming, the woman atones for the sin of letting another man brutalize her child’s body. The film cuts from her to Liu’s best friend, a man that he knows has physically assaulted the mother of his child at least twice. Cut back to a mother trying to excuse her ignorance, but realizing that she can only ask her child for forgiveness—then cut to Zach breaking down as he tries to figure out his own purpose for being, and for doing things he knows are toxic to his own family.

Liu uses the juxtaposition of the stories and confessional-style interviews of family members to explore the domestic violence version of the old adage, “What came first, the chicken or the egg?” Does the abandonment, abuse, and emotional neglect of a boy lead him to become violent to his children? Or does that tendency come from a man who is rudderless in the world, floating through it with no specific destination in mind? Furthermore, what role does the mother play in allowing these men into their lives?
Minding the Gap is an engaging yet tricky little documentary that originally sets itself up as a coming-of-age film. However, it becomes quickly apparent that Liu has more for the audience to ponder. His focus isn’t on boys coming into their own, but a study of violence, abuse, and estrangement in families. Instead of providing us with concrete answers, this study only confirms what we already know: domestic abuse is more complex than we may ever fully understand. Attempting to assign blame is as tricky as trying to catch one of these boys gliding by on their skateboards.