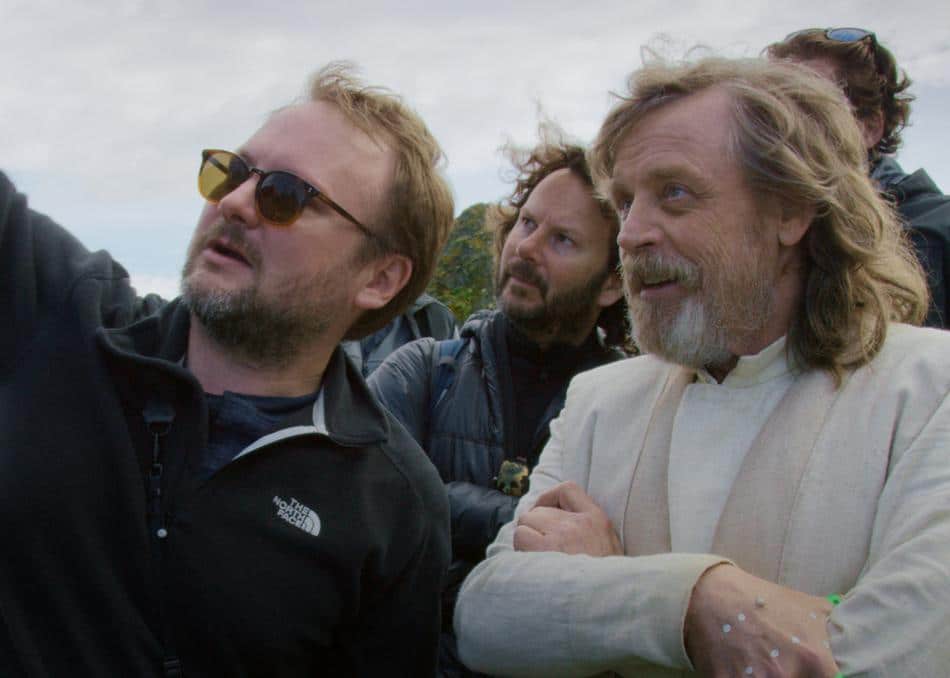 I could really sum up my review of The Director and the Jedi by telling everyone to have their box of Kleenex at the ready because tears will fall from your eyes and snot will run from your nose. But…since I need to put more words in this article than that, here we go.

From the beginning, what stands out about The Director and the Jedi (directed by Anthony Wonke) is the fact that it is actually a documentary film and not just a “behind the scenes look” piece of extra 20 minute footage or a “making of” The Last Jedi you get as a bonus feature for a film. There is a deep dive into the making of the film, but the heart of the story is the relationship between Rian Johnson and Mark Hamill.

Rian Johnson was a newbie director who felt immense pressure everyday to get things right. He compared his experience to “laying down your chips with experienced poker players” but stepped up to the challenge. In the film, you get a strong sense of his directorial style and the process by which he dissected the characters. He knew he had to mix the scope of the mythical universe with the intimacy of the character’s stories. For example, he wanted to portray Kylo Ren and Rey as being two sides of the protagonist.

However, some of his character decisions were met with resistance. Hamill (as we know) makes it very clear that he did not agree or like Johnson’s decision to end his character’s life. But once he emphatically told Johnson how he felt, he let Johnson do his thing. “It’s not my character to decide,” says Hamill. “It belongs to other people. They just rent it out to me.”

Of course the most striking moments of the film are the scenes with Carrie Fisher. This is where the Kleenex comes in. There are times when Carrie is laughing and cracking jokes about Rian Johnson, which had the entire theater cracking up during the premiere. But watching Carrie film her final scenes and the lines delivered to her will strike a chord with those of us who hold the franchise near and dear to our hearts.

At its best, The Director and the Jedi succeeds when the focus is on its titular characters: Rian Johnson and Mark Hamill. The heart of Star Wars is much better than the making of Star Wars, and fans will get appreciate the former over the latter.