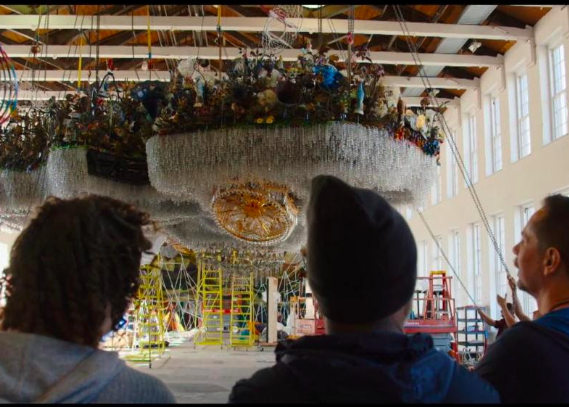 Nestled in the foothills of the Berkshires, the Massachusetts Museum of Contemporary Art — or MASS MoCA — has a story as fascinating as the art it holds. What originally began as a series of mills and later the Sprague Electric factory, MASS MoCA is now the world’s largest museum of contemporary art as well as home to some of the largest art installations ever created. As one of its co-creators, director Jennifer Trainer’s Museum Town traces MASS MoCA’s history with a loving touch that encapsulates the power of the space she helped begin build decades ago.

Like many stories of rural America, North Adams was a mill and factory town until the mid-1980s when its last factory closed down turning the once-thriving village into a veritable ghost town. Sprague Electric had provided jobs not just for the men in the area, but also for the women. In 1943 during the Second World War, the townswomen of North Adams became real-life Rosie the Riveters after most of the male population was sent abroad to fight. But even after the war, the women maintained their jobs and North Adams was at its peak with a bustling high street filled with shops, restaurants, bars, and a movie theatre. Ruth Yarter, a MASS MoCA volunteer worked at Sprague Electric for 43 years and her reminiscences of how the town once was were poignant. As she drives down the now decrepit main street she talks about how now nobody has any money, but the majority of the old storefronts are now banks. This is late-stage capitalism at its most painful.

Because Sprague Electric was the heart of North Adams economic, social, and cultural life when it closed it left a void that destroyed the few left behind. Teen pregnancy, illiteracy, domestic violence, and drug addiction boomed in the wake of Sprague’s exit. And it wasn’t until Thomas Krens, who had just returned from an art exhibit in a huge warehouse in Cologne, Germany, got the mad idea to turn the old factory into a contemporary art space. A professor at William and Mary College nearby, Krens felt stifled by the confines of traditional art and the stodgy museum spaces that felt dated and out of touch. With the help of Jennifer Trainer and Joseph Thompson, who later took on MASS MoCA without further assistance from Krens, they began lobbying politicians for state funds to develop the space and revitalize the town of North Adams. This process was a rollercoaster of yes’s and no’s depending on whether a Democrat or Republican got elected.

Not to mention, most of the remaining residents of North Adams didn’t know what contemporary art even was, let alone understand how to approach or process it. The old met the new, and the old didn’t quite like the new at first or want anything to do with it.

With alternate plans to turn the old Sprague factory into either a prison or flood the town so that nearby Williamstown could enjoy new lakefront properties, Trainer and Thompson had to convince lawmakers that this museum wouldn’t just be some pretentious space for New Yorkers to visit on their weekends. This museum would bring much needed economic development to the area. But it wasn’t until David Byrne’s “lyrical collage” installation Desire in 1996 that MASS MoCA got a permanent endowment from the state: as it turned out, Republican governor William Weld was a huge Talking Heads fan and thought the museum project was “just counterintuitive enough to work.” Yet another testament to the unifying power of music and art.

Featuring beautiful music and gorgeous, sweeping cinematography that demonstrated the sheer immensity of the cavernous space and its installations, Museum Town isn’t just about how art can save a place from economic and social ruin. One of MASS MoCA’s galleries is larger than a football field, just to give you an idea of the scope we are talking about here. On a more technical level, Museum Town details how an enormous large-scale installation comes to fruition from concept to design to the actual building and installing, leading up to the eventual opening night. Following artist Nick Cave as he builds his UNTIL exhibition — a commentary on race, nostalgia, and violence in America — we have the privilege of going backstage and witnessing all the moving parts it requires to create a huge show like this one. I found myself moved to tears often while watching these scenes. I had no idea how much actually goes into creating these large-scale installations, and the next time I see one in person I will be even more awed than usual.

Featuring music by Wilco, Laurie Anderson, David Byrne, and others, along with the stupendous camera work made me feel like I’d actually been to MASS MoCA. And the museum has even expanded into not just huge-scale art installations but also to a variety of indoor and outdoor performance spaces. This is the kind of museum you could come to once a week and see something new each time even if the exhibit is the same.

Museum Town takes the series of repurposed buildings now called MASS MoCA and turns them into what feels like a living, breathing organism that constantly produces beautiful, controversial, and mind-altering art. Director Jennifer Trainer’s deep love for MASS MoCA is on full display here. And after spending just over an hour with her baby, I’m rather in love with them too now.