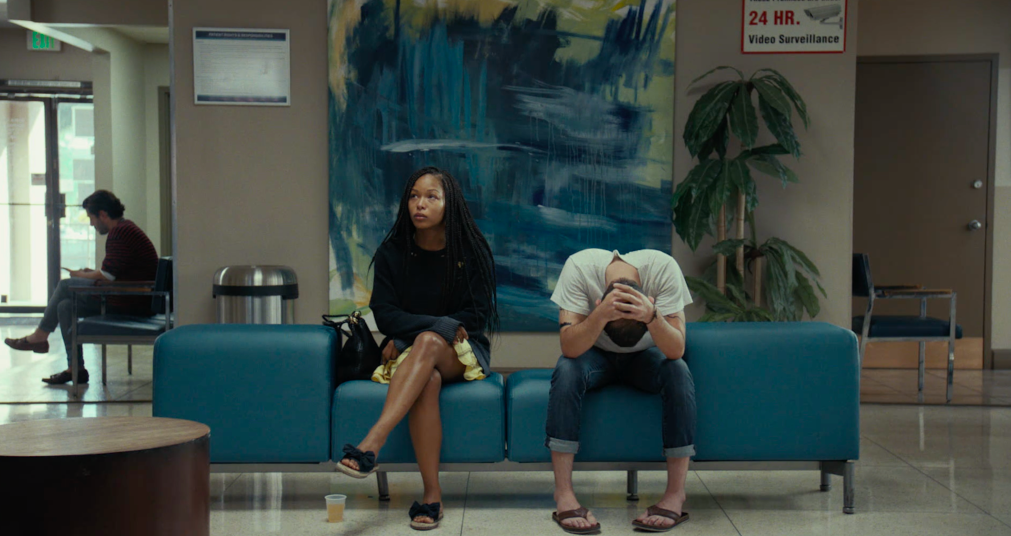 This is Merriam-Webster’s definition of the phrase “test pattern”: “a fixed picture broadcast by a television station to assist viewers in adjusting their receivers.” Shatara Michelle Ford’s debut film Test Pattern attempts to assist the audience to adjust our perception of sexual assault in the 21st century.

In the opening scene, we see a glass of water barely being held in the hands of the main character Renesha (Brittany S. Hall). Just as the water is about to spill from the glass onto her lap, a hand deftly lifts the glass out of Renisha’s hands. The camera pauses on Renisha just long enough for us to see she’s been drugged. Next shot, we see the reflection of Mike (Drew Fuller), good looking yet creepy, in a hotel vanity mirror bathed in red light. He places the glass of water on the vanity, nefariously looking at Renesha’s reflection in the mirror as Renesha’s blurry form wobbles unsteadily in the foreground.

The film flashes back to Renesha in a bar dancing with her friends out on a girls’ night. A different white guy, Evan (Will Brill), who looks like he’s happily had a few, watches Renesha enraptured. Filled with liquid courage, Evan goes to the dance floor and dances with Renesha. Later, as Renesha and her girls sit outside the bar laughing and drinking, Evan introduces himself to Renesha and asks for her phone number. She gives him her number. She smiles. He smiles, thanks her, and walks away.

Next scene we see Renesha on her way into a grocery store, and Evan is on his way out. It must be weeks later because as they pass one another Renesha sharply says in passing, “I didn’t think you would call.” Evan stops her, apologises profusely, which leads to an impromptu dinner date that night, which leads to another date at Renisha’s house, where the two immediately act on their mutual attraction to one another. In less than four minutes on screen, a couple is born and a sexual assault occurs, before the opening title.

Writer, producer, director Shatara Michelle Ford has an eye for concise storytelling and beautiful imagery. Test Pattern takes place in San Antonio, Texas, and showcases the eclectic nuance of this southern city perfectly. Renesha’s high-powered job affords her an expensive apartment with a spectacular view, which tattoo artist Evan is instantly impressed with on their second date. After the opening title of the film, we discover Renesha’s given up her high paying job and apartment. She and Will are now a couple happily living together in a cute little house in a modest neighborhood. Renesha, who when she was single had only one small tattoo where only her intimate partner could see, now has tattoos all over her body (including a full sleeve on her left arm). All this is the work of Will. Renesha is starting her first day of work at a non-profit while Will cooks her breakfast and preps for his one tattoo client for the day.

The natural style of dialogue in Test Pattern flows realistically from the actors, which makes it easier to pay attention to the story without the distraction of stars playing the leading roles. After her first day of work, Renesha’s friend Amber calls asking her to come out for a drink to celebrate. Evan tells Renesha to head out without him, but to take a car just in case she’s going to be drinking. She departs, to meet Amber at the bar where the romantic story slowly turns dark.

Shatara Michelle Ford’s writing is efficient, clear, and effective. Each word is crafted with skill. The actors perfectly perform their roles, all of the movie-making techniques help  he story make sense and are perfectly executed. The slow burn pacing of the film fits perfectly with the depiction of systemic racism that Renesha endures as Evan takes her on his quest to get a rape kit immediately after the assault. The fact that Renesha’s rapist and her boyfriend are white men who control her body in different ways is clear.

All of the technical pieces of the film are in place and the story should have left more of an impact on me than it actually did. In a world where Michaela Coel’s fearless limited series about sexual assault I May Destroy You exists, the emotional connection to the story that Test Pattern attempts never was fully realized. When I should have been wrapped up in the injustices happening on screen, I kept wondering why Renesha ever even went on a date with Evan, let alone sleep with him on their second date. The sequence where Renesha and Amber (Gail Bean) hang out at the bar with Mike (the sexual predator) and his friend is technically proficient and totally predictable telling of a girls night out with your worst girlfriend.

The actors had a great rapport, but I felt no chemistry between any of them. The most authentic connection in the film was between Renesha and Nurse Peg (Amani Starnes). When Renesha and Evan finally are able to find a hospital with a rape kit, Renesha sits alone in an examination room totally spent from an entire day of disappointments. Nurse Peg enters and offers Renesha the authentic compassion and care that should have occurred hours ago.

The fact that Shatara Michelle Ford is the writer, director, and producer is impressive. She checks all of the right boxes, but it takes a specific skill to be able to write and direct a film. Perhaps in the hands of a different director, the film would have been able to provide more of an emotional connection for the audience. This film feels like the story is being told by someone who has studied and researched sexual assault cases from news stories and then decided to make a movie about the subject to raise awareness.

Even though the style of the acting and dialogue is natural, the entire film feels like I’m being told a story instead of seeing inside the lives of actual people. Test Pattern could have been heart wrenching; sadly, it wasn’t. At the same time, Test Pattern is aesthetically beautiful and is a solid indie film.

There’s so much that is great about this film, I just wanted the story to draw me in so that I believed I was watching actual people, instead of watching actors portray roles about 21st century sexual assault perfectly in a film. In a world where it’s challenging for Black female filmmakers to get their work produced, Test Pattern is a triumphant first effort for an independent feature that does its job revealing new perspectives about sexual assault. It’s clear that writer-director-producer Shatara Michelle Ford has a gift for filmmaking. I look forward to watching this gifted artist grow deeper into her voice.

Test Pattern will be available in virtual cinemas through Kino Marquee starting February 19, 2021. In NYC, it’s opening at BAM and MoMI virtually.