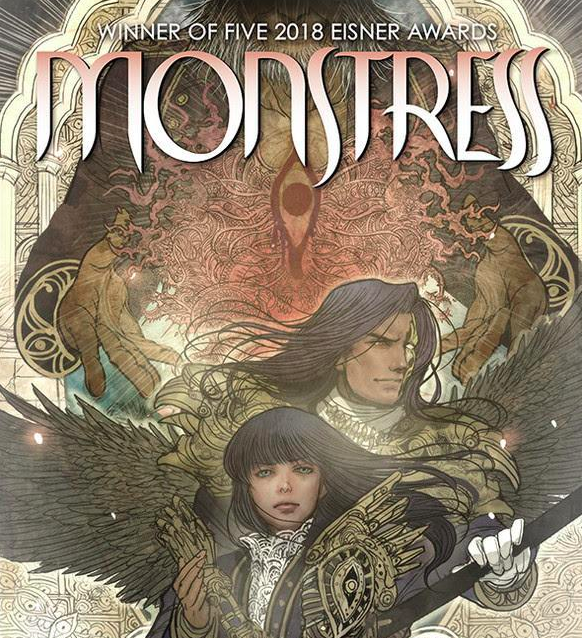 There is not a quote more apt to describe Monstress, the award-winning comic written by Marjorie Liu and illustrated by Sana Takeda, than this one. An epic fantasy set in an alternate Asia, Monstress is populated by vengeful witches, ancient deities, magical creatures, and the Arcanics — a powerful half-human, half-ancient beast whose very existence has provoked a war with the human race. A young female Arcanic named Maika Halfwolf might just be the only key to restoring peace and justice to the land. Tortured by the memory of her dead mother and the traumas of her past, Maika must fight to stay alive in these war-torn lands, while a terrible power she does not understand is awakening inside of her and slowly asserting its control.

Even with only three volumes released, Monstress is an incredibly detailed piece of storytelling that sometimes it might be hard for new readers to follow along. When there is a host of supporting characters to get familiarised with, as well as a hefty weight of backstory behind every character-action, you might find yourself wondering, as I did, about what is actually going on? Who is this newly introduced character? Or why whatever this thing that’s happening is happening at all? Yet despite the very intricate world-building that might take a little bit of getting used to, what remains fascinating about Monstress is the alternate Asia Liu has created and the vibrancy of its citizens.

Asia is a continent that has been severely ravaged by war. Monstress itself is inspired by Liu’s grandparents’ wartime experiences in China, specifically during the rape of Nanjing. While stories set in wartime Asia have appeared in Western pop culture before, few have explored the aftermath of war itself and its devastating ramifications on the surviving locals. We are used to spending time with a white protagonist; the only Asian characters we meet are the villains or the few friendly locals who help him acclimatize. After they have served their purpose in his story – mostly to be defeated by him or to teach him a moral lesson — they simply disappear into the background before the gaze is quickly shifted away from Asia itself — away from its people, its politics, and, perhaps most damaging of all, from its scars.

Liu’s Asia does not concern itself with these white male heroes and their relationships to warfare. Instead the Asia of Monstress is a matriarchal one. Women of colour rule over kingdoms, cities, organisations. They captain ships, save entire nations, awake demons and wreak havoc. It is these women’s war stories that Liu brings to the forefront as she explores the price they continue to pay for survival. (“Maybe one day you’ll remember that you had a life before the war.”) In their world the fighting seems never-ending; the promise of joy and peace grows increasingly dimmer. As one character sadly summarizes: “The war has made us all hard.”

Another interesting thing about Monstress is, of course, Maika Halfwolf herself. Maika continually grapples with being two things at once: an Arcanic and a human, a woman and a monster, a victim and an aggressor. Maika’s many dual identities become even more fascinating when we consider that Liu herself is biracial; that much of Maika’s arc is her questioning her past, her present and, most significantly, her identity. Maika also uses the fact that she is an Arcanic who can ‘pass’ as a human to her advantage. She recalls how, as a child, she prays for an Arcanic mark to appear on her skin (“I prayed for anything — any mark would do”) just so she won’t be considered an outsider by her people. She wonders if she is merely an experiment or a weapon that her mother has created. Is she a danger to others? Or is she a danger to herself? “Who am I,” she asks the ghost of her mother, “if not even you loved me?”

Maika’s inner thoughts that are directed to her dead mother and her lost childhood friend Tuya are understandably very bleak; almost every aspect of her life is tainted by either abuse or grief. Indeed the very first image we see of Maika – which also happens to be the very first image in the comic – is one of both violence and defiance: Maika standing stripped naked, her black hair flying around her face, a collar around her neck, a brand of some sort stamped to her chest, a little daring smirk on her lips. Only Kippa, the half-fox Arcanic cub, manages to shine a ray of hope into Maika’s grim world. “Someone has to care,” insists Kippa resolutely. “Something good has to survive. It just has to. As long as there’s even little good in the world, there’s a chance to make things better for everyone.” Yet Maika continues to stumble from one plot point to the next fuelled mostly by unanswered questions about her past and, to a larger extent, her rage. 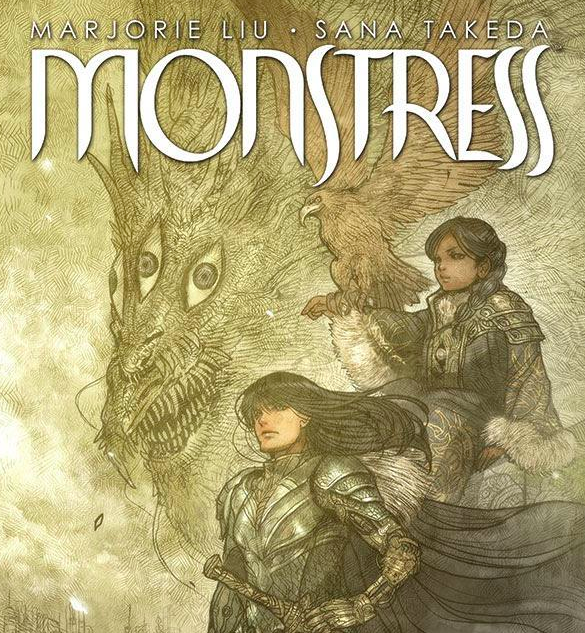 Ren, the cat, and necromancer who travels with Maika, once questions Kippa’s devotion to her by asking whether the affection can ever be reciprocated: “When she’s angry, do you think you even exist?” Indeed sometimes Maika’s rage appears so overwhelming, it threatens to dominate her entire being. It is sometimes expressed as hunger, sometimes like the feeling of having these “vast holes inside” of her. Other times as the literal monster that’s living inside of her body. Yet while the monster might be destroying her from within, it is also helping her defeat her enemies and keep her alive. As Liu herself explains in an interview with The Atlantic: “Women need rage to survive in society”.

In the same interview, however, Liu also talks about how rage can be “energizing and sustaining” but that it is “ultimately problematic” when “it doesn’t lead you to a deeper exploration of the source”. This observation made by Liu about how female rage “without a project of emancipation in the long run” might not eventually be as “rewarding” as we’d like it to be is evident in Maika’s story arc. Yes, Maika is angry and grieving; she is seeking justice with a vengeance. But she is also learning to live with the monster. She is learning to understand it, become one with it, even use and channel it. Only by doing so does she begin to learn more about her past, who she is and who she can be.

In many ways, Monstress as a whole can be seen as an exploration of female rage, as well as the trauma and the grief that accompany it. But, like Liu herself has said, it is not just female rage in its purest form. It is about how rage must not simply be felt but explored in order for it to be transformed into a positive force for self-acceptance and change; that it is essential not to abandon yourself entirely to the monster without understanding its origin and knowing who you are without it. To quote the good-hearted, always hopeful Kippa: “If you abandon your friends to a monster, you fail them forever”.